JoanOvArc’s debut album has been forged from a life on the road of blood, sweat, tears and life’s ups and downs.

Recorded at the famous Rockfield Studios, and produced by Gil Norton (Foo Fighters, The Pixies), the disc sees the Joanovarc putting their cards firmly on the table. The band said of working with Gil, “He brought the best out of us in the studio and let us breathe as musicians and made us feel like we were free to express everything in the studio”. 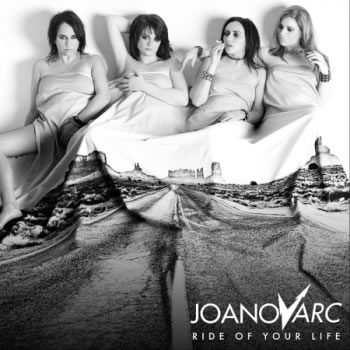 The opener, title track “Ride Of Your Life”, kicks off well. Thumping drum and bass, cool guitar and great vocals set the tone for this road trip.

New single “Dragon In The Sky”, with catchy riffs and sing-along vocals, make it obvious to see why it is getting substantial airplay on Planet Rock Radio.

Former single “White Trash” is a life story and an empowering song. One for the downtrodden masses, and has a great vibe to it, almost anthemic. “Seeds Of Summer” has a psychedelic feel and fits in well. Driving guitar and drums push it along to the end.

First single “Live Rock ‘n’ Roll”, with its old school vibe, is a heavy rocker and a live favourite. “Going Down” is a more melodic track, with a slower, almost blues feel to it. “Five Years” is an atmospheric tale of love gone bad, and features some great guitar work over a slow beat.

“Running Away” has a more commercial, pop-rock 80s feel. Catchy lyrics and riffs make it an easy ear-worm! “Work”, with an infectious beat reminiscent of Jet’s “Are You Gonna be My Girl?”, is another memorable tune.

“Sisters” is a tale of losing a friend, with its great message, catchy hook, and driving drum work. The album finishes with “Peace Of Mind”, a beautiful ballad with some lovely words to a great tune.

The album is superb! Its fantastic mix of tracks featuring the band at their best is an excellent debut which deserves to be heard.

Ride Of Your Life, released via Red Vixen Records, is available on 11 November.

You can catch the band live between now and the end of the year at a few dates, including Planet Rockstock, and The Camden Rocks Christmas All-Dayer. Check the Joanovarc website for details.