The Kalamazoo, Michigan band is embarking on a West Coast tour from July 15 through July 30.

BoneHawk is excited to announce their first ever West Coast tour, which comes fresh on the heels of the Hornacious Wax Records’ release of their Southbound: A Tribute To Thin Lizzy 7″ EP and Ripple Music’s The Second Coming of Heavy, Vol. III split LP with Sweden’s Kingnomad.

BoneHawk released their debut album, Albino Rhino, on Hornacious Wax Records in October 2014. Released only as a vinyl LP, they quickly sold out of their first two pressings on white vinyl and purple vinyl. They have since released a third pressing on green vinyl as well as a worldwide compact disc release through Ripple Music.

“We are super stoked that we were able to sell so many copies of Albino Rhino on our own,” Chad Houts says. “But it’s been almost two years since we released it, so we are even more stoked by the Second Coming split LP and the Thin Lizzy tribute, both of which have led us to get off our asses and out on the road!”

“We plan on getting out of Michigan a whole lot more,” Matt Helt adds, as “touring has been a long time coming for us, and we hope to have a new record out next Spring with more touring to go along with it.” 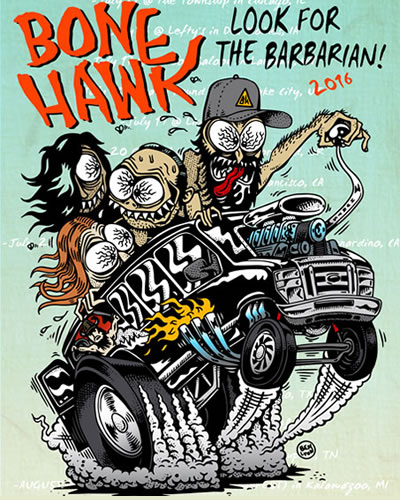