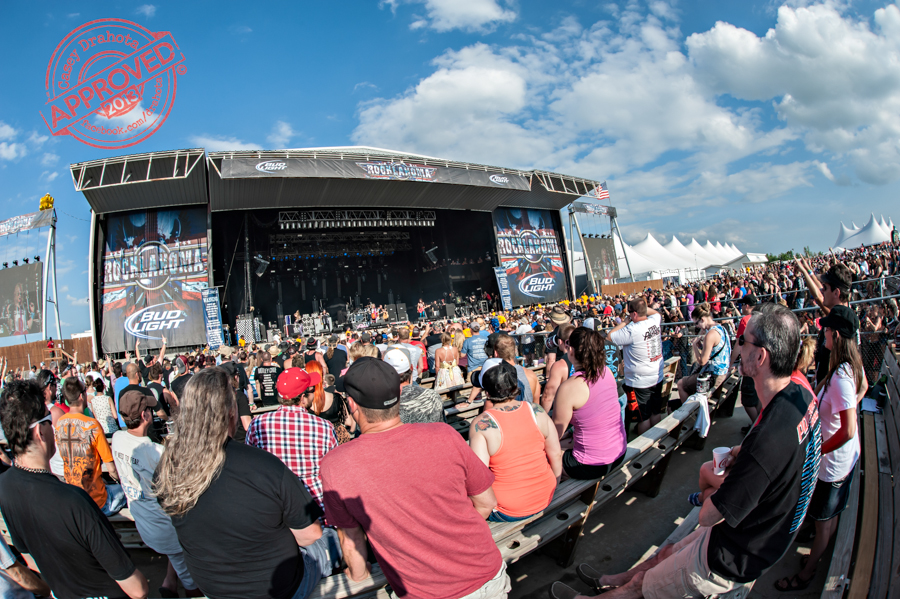 Once upon a time, my Memorial Day Weekend consisted of going to the Lake of the Ozarks for the annual beginning of summer party. That all changed in 2010 though, when I decided to try out the Rocklahoma Music Festival. I couldnâ€™t resist the draw of bands like ZZ Top, Godsmack, Three Days Grace, Tesla, and more than 30 other bands over a full three days. With Rocklahoma 2013 being my 4th year in a row, I feel I am qualified to say that Rocklahoma is a festival that is done right and not to be missed.

For Rocklahoma 2014 there are several ticket options available, but general admission tickets and VIP seating packages tend to be the most popular. For me it’s VIP all the way!Â  With a VIP package you get an assigned seat in the first 30 rows, access to the air conditioned beer tent (including unlimited refills of beer), as well as all the food you can eat. I can not speak highly enough of the quality and amount of food that is provided in the VIP tent. You will find everything from steak, brisket, chicken, and roast beef to any number of sides, a full salad bar, and desserts. The quality of the food and unlimited refills of Bud Light, really make the VIP package the only way to go in my opinion.

The festival is set up very well with easy access to both main stages, as well as the two other stages located inside the beer tents. Music starts everyday at noon in the Axis tent with main stage music starting at 4pm. The lineup is scheduled so that as soon as one band’s set is complete, another band starts playing on the adjacent stage which keeps the entertainment flowing nonstop. The layout is such that you can hear the music anywhere inside the festival, so it’s not a necessity to walk back and forth between the two main stages. If you prefer to be close up, it is a very short distance between the main stages.

Rocklahoma is located just outside Pryor, Oklahoma approximately 40 miles east of Tulsa. With I-44 less than 15 miles from the festival grounds the drive to Rocklahoma is pretty painless. In 2013 the traffic entering the grounds was heavier than the previous years and caused us about a 15 minute delay, which really is not too bad. Â I did hear a couple stories of people sitting in traffic for over an hour, but thankfully that was not my experience. My advice to avoid traffic would be to get there early and catch some of the lesser known bands, which often are the bands I end up enjoying the most.

Within just a short distance of the festival grounds there are many hotel options, but if youâ€™re like me, a music festival is always better when camping is involved. Rocklahoma has camping spots that surround the festival grounds andÂ  no matter where your camp spot is located you’re still close to the action. There is even a beer tent inside the campground that has live music until 3 a.m., but believe me the party continues way after three if you’re up for it. Â My only criticism would be that there is no power in the campground, so make sure to have a generator capable of handling your camper’s electrical needs, as well as several extra gas cans. Â There is a c-store, shower house, and sewer pumping vehicles that will clean out your camper’s waste tanks. You can also refill your fresh water and after several days of camping that can be a necessity.

Without a doubt Rocklahoma 2013 was a great success. An amazing lineup featured: Guns and Roses, Cheap Trick, Bush, Korn, Alice in Chains, and Papa Roach just to name a few!

Every year I look forward to this festival and when I leave at the end of the weekend I know Â I got more than my money’s worth of great entertainment. As long as they continue to keep rock alive, I definitely know where I will be spending my 2014 Memorial weekend. Â See you there!

For more information go to www.Rocklahoma.com