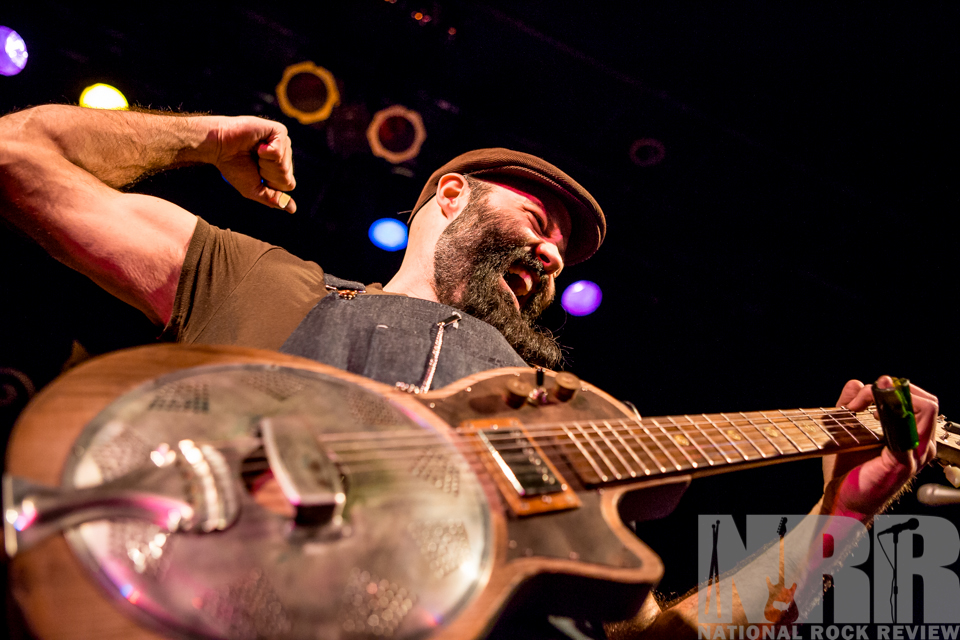 The Reverend Peytonâ€™s Big Damn Band is a three-piece American country blues band from Brown Country, Indiana, living in a rural area north of Nashville, Ind., and south of Bean Blossom. Their style of blues can be considered a mix of Roots music, Delta blues, and Country blues.

The Big Damn Band plays more than 250 dates per year. This includes many headlining dates as well as past tours with Flogging Molly, Hot Buttered Rum, the Dirty Dozen Brass Band, and Clutch, to name a few.

The band is currently out on The Big Damn Roots Revolution Tour and made a pit stop by the Magic Bag in Ferndale, Michigan on March 15th, 2014. Our photographer, Joe Orlando, was on hand at the Magic Bag to catch the show in action.

The night started off with Grammy Award winning Dom Flemons (formerly of the Chocolate Drops). Dom was sent forward in time to bring us the sounds of times long gone. He is a living glimpse into the past. A history book full of music. In my brief experience with Dom, I found him to be humble, friendly, almost neighborly in his approach. His musical talent demonstrated why he is deserving of such a high accolade (Grammy award). A one man show that got the (full) theatre jumping.

Following such an impressive start was no easy task but the Dex Romweber Duo lived up to the challenge. The brother/sister combo pack one hell of a punch. Dex came on to the stage with what looked like the first amplifier ever made. This thing was rustic and beat up however, I have learned not to judge a book by it’s cover. Dex made this thing scream!! His sister, Sara Romweber, was what could only be described in one word: Amazing. This woman put on a drum clinic. Precise popping beats with some serious swing. After listening to these two, I thought for sure that if I stepped outside on Woodward Ave., I would find cars with fins, malt shops, and chicks in poodle skirts. This duo is a true hipster’s delight.

I am literally sold on their music as I purchase their latest composition “Images 13” on iTunes (which almost seems criminal as their music should be strictly played on 45’s only.)

The closer for the night was more than expected, and by now, my expectations were pretty high. Reverend Peyton and his Big Damn Band delivered. I need to give the crowd some credit on this one. Everyone was on cue with clapping, stomping and screaming. I don’t think there was one wall flower in the house. Rev’s stage presence was undeniable. He commanded the crowd and everyone happily obliged. His talent was as immense as his stature. Playing a variety of vintage guitars that have seen some serious miles, most notably his cigar box guitar. I’ve seen a lot of concerts and musicians in my time and the reverend has raised the bar for all other shows to come. I didn’t know my ears were capable of hearing that fast. Their work is just fun to listen to, no matter what genre of music you prefer. Every single patron got their money’s worth that night and the crowd were not the only ones who enjoyed themselves as these artists made it quite obvious that they love what they do.

Thank you to the Magic Bag for a great night as well. A cozy concert theatre where everyone feels close to the show. The Magic Bag has fantastic sound quality but they could use a couple additional spotlights to light the sides and rear of the stage. If you make it to a show at the Magic Bag, you might want to get to the show early as The City of Ferndale is limited on parking.