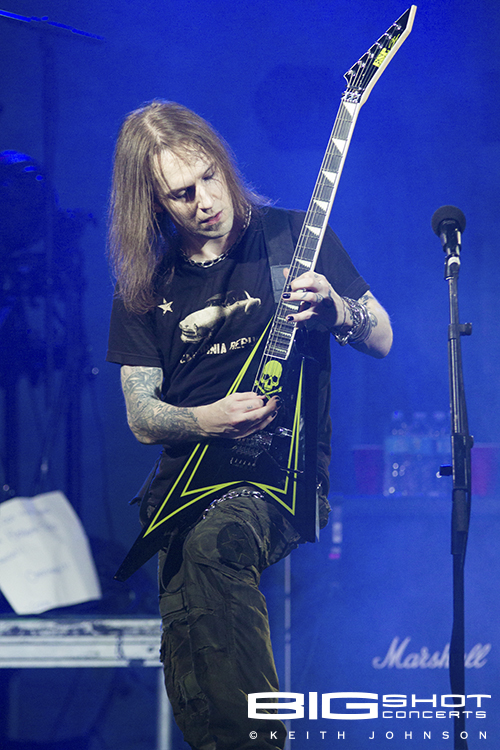 Metal was live and loud at Revolution Live in Fort Lauderdale on March 15th. The show featured famed metal band Children of Bodom, with their special guests Death Angel and TÃ½r. Beautiful weather meant no one was staying home. No where in south Florida was this more evident than inside Revolution Live, as the house was packed with fans eager for the bands to take the stage.

First up was Nordic metal band, TÃ½r, singing the bardic tales of Vikings, heroic deeds, and Norse gods. The band is still riding the wave started with the release of their latest album, Valkyrja, in September 2013. The fans responded with vigor as they crowded the floor in front of the stage. TÃ½r always puts on a good live show, as they did this night.

Next up was Death Angel. Hailing from Concord, California, they initially formed in 1982 during the early days of the West Coast thrash scene. They are also supporting a recent album. The Dream Calls for Blood was released in October of last year through Nuclear Blast. Guitarist Rob Cavestany has described the album’s title as being the bands motto, as “blood is all the sacrifice and all hard work that goes into it.”

Death Angel encouraged their fans to get rowdy during their set. The fans had no problem with this request, as was clear in the moshing taking place on the main floor. The bands production team had this show dialed in; the sound was phenomenal. Even better was the way DA interacted with their fans throughout their show.

Finally, it was time for the band everyone was waiting for. Children of Bodom hit the stage with the usual energy fans have come to expect from them. While CoB has been around for more than 20 years and their lineup has changed little, Alexi Laiho is clearly the star with the show centering around him. And that’s okay as he is a great showman as lead vocalist and guitarist.

COB played for around 90 minutes covering 15 or 16 songs. The sound was great and the band was spot on in theor performance. The dark, moody lighting used was the perfect complement to their brooding set list.

During the CoB set, the fans were a little out of control. A violent mosh pit formed on the main floor with fans colliding with each other, arms flailing, and bodies hitting the floor. In addition, there were many crowd surfers riding the on the hands of the human wave. There were even a few who managed to keep both feet on the ground while waving Finland’s flag.

All the bands were great, the venue charged with excitement. If you can say nothing else about this night, then say this… Fort Lauderdale loves Heavy Metal!

Guest photographer and contributor Keith Johnson of Big Shot Concerts was there to capture the show.