The Butcher Babies returned to Flint, Michigan to celebrate singer Carla Harveyâ€™s birthday on their No One Can Hear You Scream tour.

The Butcher Babies made a glorious return to the Machine Shop on Oct 04, 2014. It had been a couple of years since they embraced the Shopâ€™s stage. In fact, the band played their first ever Michigan show right here at the Shop as the opening act for Otep back in 2012. This time, however, The Butcher Babies were the headliner and the venue was packed.

Although based out of Los Angeles, California singer Carla Harveyâ€™s roots come all the way back to Southeastern Michigan where she grew up in the Northwestern suburbs of Detroit. Harvey struggled with the divorce of her parents, while growing up, and found comic books as an escape.

In an interview with Hustler Magazine, she states, â€œI would spend a lot of time in my room alone listening to music, reading, writing, and drawing. Those things saved me from becoming a complete hooligan. They were a nondestructive outlet for all the anger and sadness I felt over my parentsâ€™ split and the alienation I felt growing up biracial in a place that is oddly segregated even today.â€

Harvey took her love for music and sang in a band called Godâ€™s Girlfriend during her senior year of high school. 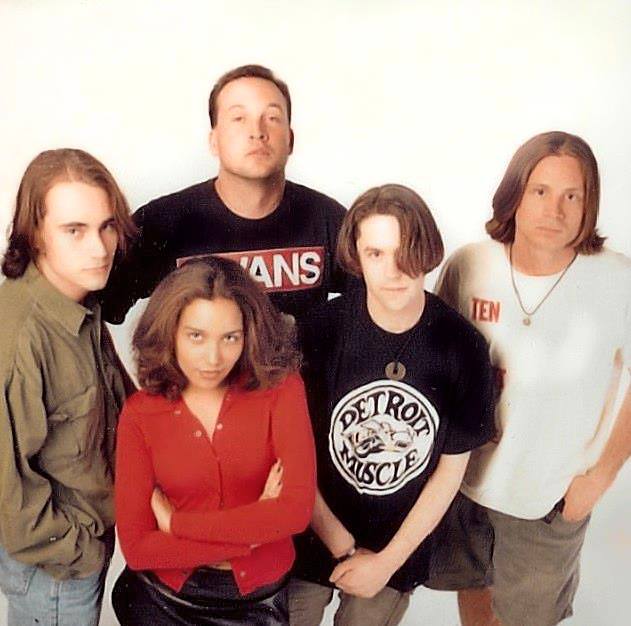 Harvey cites Slash and Jimi Hendrix as her main musical heroes stating â€œAs a biracial kid growing up in the Detroit area, I got a lot of shit for loving hard rock and metal, and seeing musicians that were also African American playing the music I loved made me strong enough to say, â€˜Fuck you, Iâ€™m going to like what I want.â€™â€

Following high school, her talent for drawing earned her a spot at the prestigious College for Creative Studies in Detroit, Michigan. She also trained in theatre at Wayne State University and had several lead roles in Metro-Detroit theatres such as the Rochester Playhouse, Southfield Theatre, Farmington Players, and Wayne Stateâ€™s Hilberry Theatre.

After relocating to Southern California, Harvey landed her first job in Hollywood as an Entertainment Reporter for the Playboy Channel. Since then, this multi-talented Michigan native hosted other shows, landed gigs acting in film and television, earned a degree in Mortuary Science (to which she is also a licensed funeral director and embalmer), and is an artist and published author.

Harvey premiered her first published comic book, Butcher Babies, at Comic Con 2011 with great success. She is working on her next comic series, Soul Sucka, which is, according to her bio, a look at Americaâ€™s dark history through the eyes of an attitude wielding, Afro wearing, black vampiress in search of her roots. Harvey says she drew upon childhood memories to craft the heroine of Soul Sucka, Delphine Johnson. She says she put herself into the character and admits that dealing with her own issues helped her make Soul Sucka into a multidimensional character, not just a hot chick with fangs.

Harvey is an accomplished artist who sells her artwork, original drawings and prints, through her Etsy website. Some of these drawings made it into a special edition sketchbook Harvey published, titled Gash, which includes photos, sketches, journal entries and notes from Mortuary College.

Most recently, she published her first novel, Death and Other Dances, which is inspired by Harveyâ€™s own life stories. According to the synopsis of the book, which Harvey calls a â€œraw, graphic work of creative nonfiction,â€ the story centers on Autumn Franklin, an awkward, biracial girl growing up in a suburb of Detroit. While struggling to connect with others, Autumn builds a stubborn tenacity that serves her well as she transitions from the bowels of the adult entertainment industry to her rebirth as a mortician. Itâ€™s there that she learns what it is to live, love, and to allow others into her world. 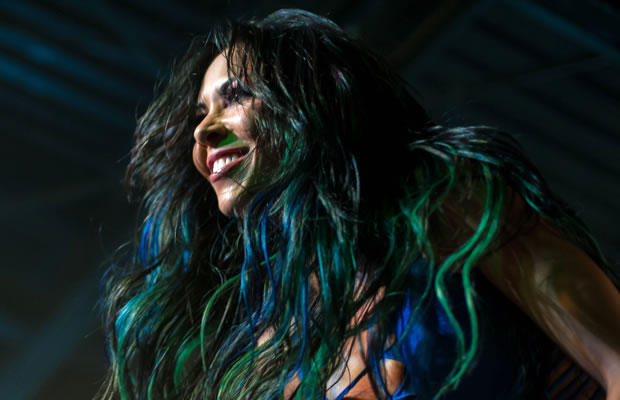 With all these credits to her name, Harvey will tell you that her favorite role is as the singer for her band Butcher Babies. The band consists of Heidi Shepherd (vocals), Carla Harvey (vocals), Henry Flury (guitar), Jason Klein (bass), and Chris Warner (drums). Harvey and Shepherd played together in a punk rock cover band before forming the Butcher Babies. Harvey and Shepherd went through a few member changes before solidifying the lineup with Flury, Klein, and Warner in 2010.

Both Harvey and Shepherd are fans of Wendy O. Williams of the Plasmatics, and decided to name their band after the Plasmatics song â€œButcher Baby.â€ Shepherd says Williams was a huge influence on them stating in an interview with Horrorpilot.com that â€œWendy was a bad ass. She didnâ€™t give a fuck what anyone thought. We share that spirit.â€

They play a style of thrash metal which fuses sex, blood, shock rock, and the ambiance of a classic slasher flick such as Texas Chainsaw Massacre or House of 1000 Corpses. In an interview with Revolver Magazine, Harvey described their music as being influenced by a combination of thrash, punk, experimental, death, and nu-metal, but that theyâ€™ve managed to create their own sound that is â€œpure sex, blood, and rock and roll.â€

Rock Journalist Keith Valcourt recently hailed the Butcher Babies as â€œThe Hottest Band in the Worldâ€ and stated in a review of their live performance that â€œThe Butcher Babies deliver a loud crashing blend of heavy metal, punk and thrash that recalls Pantera. Their stage show embodies the horror antics of Alice Cooper and Rob Zombie. Carla and Heidi donâ€™t merely sing: they assault the crowd with a blinding flash of aggression and abuse. And the crowd loves them for it.â€

They self-released their first single, Blonde Girls All Look the Same, in 2011 and a Self-Titled EP in 2012. The band made a short film/music video for â€œMr. Slow Deathâ€, off their EP. The video made a huge impact on YouTube and has since garnered over one-million plus views. The band toured in support of their EP opening for Otep. This tour brought them through Michigan where Harvey played her first ever show in her own home state, which was also the first time that many of her family and friends had seen her live act.

The vocal powerhouse duo of Harvey and Shepherd sang, screamed, and growled unlike anyone else in the metal scene today.The Butcher Babies signed a worldwide deal with Century Media Records towards the end of 2012. Their debut album for Century Media, Goliath, was released in July of 2013. It sold 3,300 copies in the US during its first week landing at #112 on the Billboard 200 chart and #3 on the Billboard Heatseeker chart.

The band toured extensively with the likes of Marilyn Manson, Danzig, In This Moment, The Defiled, and Black Label Society as well as the 2013 Rockstar Energy Drink Mayhem Festival (which also included Rob Zombie and Five Finger Death Punch).

Last month saw the release of the Butcher Babies sophomore effort for Century Media Records, Uncovered, an EP which contains five cover songs the band agrees are some of their favorites. Each member picked one song to cover. The songs they chose are: â€œBeer Drinkers & Hell Raisersâ€ by ZZ Top, â€œTheyâ€™re Coming to Take Me Awayâ€ by Napoleon XIV, â€œDonâ€™t Give a Fuckâ€ by Suicidal Tendencies, â€œCrazy Horsesâ€ by The Osmonds, and â€œPussy Whippedâ€ by S.O.D.

The band is currently out on their No One Can Hear You Scream headlining club tour in support of the new EP. The tour made a stop in Flint, Michigan where the band not only celebrated their return to the Machine Shop but it was also Harveyâ€™s birthday. The near sold-out club was packed with fans as well as many of Harveyâ€™s friends and family members.

The vocal powerhouse duo of Harvey and Shepherd sang, screamed, and growled unlike anyone else in the metal scene today. Although the tour is dubbed the No One Can Hear You Scream tour, this was definitely not the case as their voices pierced through the cinder block walls into the patio outside. This was one loud electrically charged performance, which had your head hurting and ears bleeding from all the head banging.

Harvey and Shepherd jumped and head banged while constantly interacting with the crowd. They definitely had the crowdâ€™s attention and everyone, male and female, seemed in awe or in love with them. This hard rocking extravaganza was heavy like Pantera and aggressive like Slipknot.

The band broke through many fan favorites such as “Magnolia Blvd,” “Mr. Slowdeath,” “I Smell a Massacre,” “Blonde Girls All Look the Same,” “Axe Wound,” “Jesus Needs More Babies for His War Machine,” as well as their covers of “Crazy Horses,” “Pussywhipped,” “Beer Drinkers and Hell Raisers,” and “Theyâ€™re Coming to Take Me Away.”

After their set, the band made their way back to the merch booth, where they met with and shared birthday cake with their fans, all after everyone sang “Happy Birthday” to the birthday girl.

In an industry dominated by men, The Butcher Babies are re-writing the book on heavy metal. What some might think of as a novelty act is definitely not the case. These girls are bringing back energetic in-your-face metal while putting their own twist on it. Not only are they beautiful, but they can kick your ass with their raw brand of brutal metal. 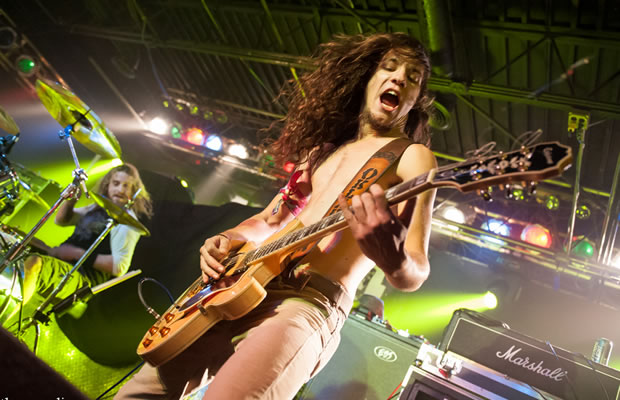 Along for the ride was Oklahoma rockers Anti-Mortem who are playing direct support on the tour. Recently signed with Nuclear Blast Records, they sold close to 1,400 copies of their debut album, New Southern, in its first week charting at #12 on Billboard Top New Artist Albums and #52 on Billboard Hard Music Albums.

Formed in 2008, the band consists of brothers Larado Romo (vocals) and Nevada Romo (guitars) along with Zain Smith (guitars), Corey Henderson (bass), and Levi Dickerson (drums). According to their bio, they spent their formative nights and weekends woodshedding their sound on the concert stage they built themselves in the Smith family barn. While Smithâ€™s parents were away working on the weekends, Anti-Mortem would turn their barn rehearsal space into a makeshift venue and hone their chops by inviting friends and family in their home town of Chickasha over for an afternoon of gravel-throated vocals, crunch-laden riffs, thick grooves, and some good olâ€™-fashioned Southern hospitality.

Nuclear Blast Entertainment President Monte Conner states: â€œAnti-Mortem connect with a fist-to-the-face, combining the power of American heavy metal and the down-home flavor of the classic Southern rock and blues they were raised on. Iâ€™ve been watching them develop for the past two years and they are now ready to show the world how a good ass-kicking is delivered.â€

Kicking some ass is definitely what these guys did when they hit the stage. They play with the heaviness of bands like Black Label Society, Mastodon and Killswitch Engage but mix it up with the southern swagger of bands like Shinedown and Black Stone Cherry. 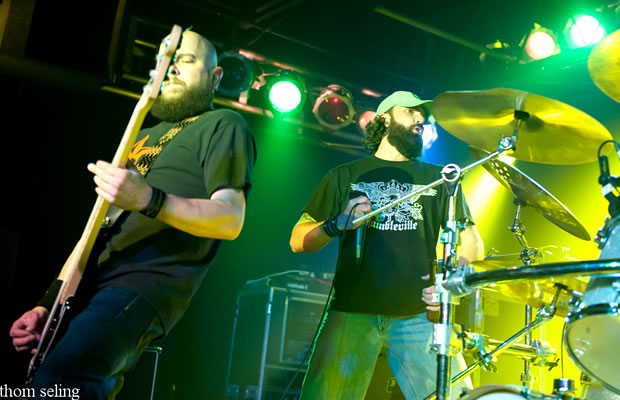 They are a hard rock band fused with a dose of heavy metal. Rossioâ€™s ferocious vocals fill every ounce of the room while Garciaâ€™s pounding bass rhythms bounced against the back wall.

Our photographer, Thom Seling, was on-hand to catch all these bands in action. Here are his images from that night.