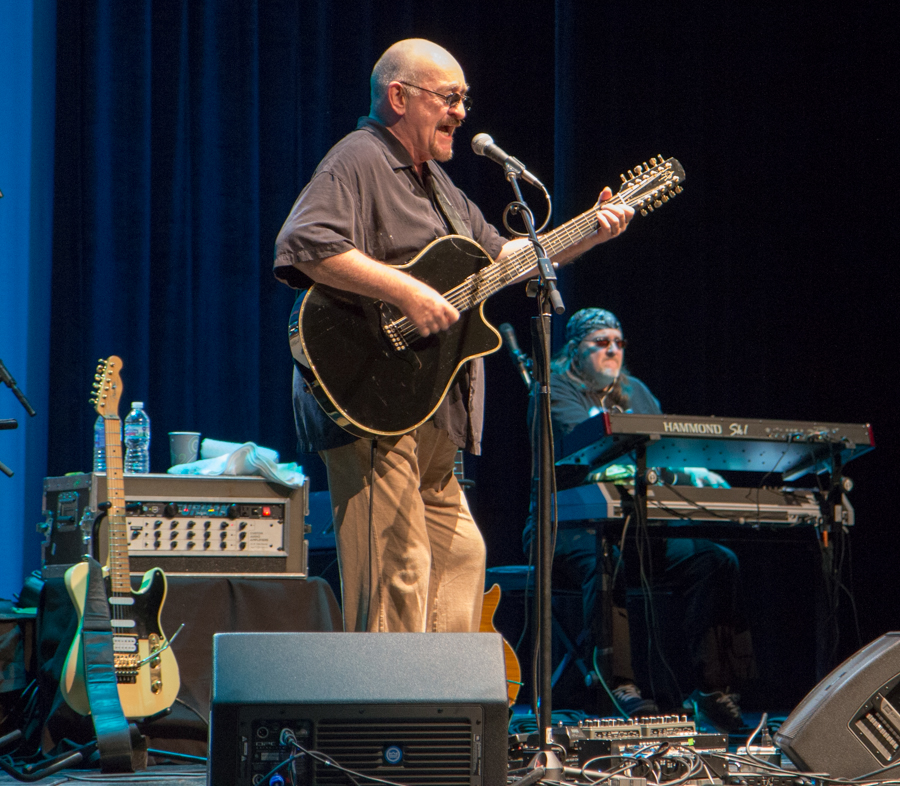 We are all acoustically resonating beings, happily vibrating to those sounds that find a place in our soul.Â  I know what you are thinking… â€Chuck… Are you trippin’?â€Â Â  I can tell you friends, Iâ€™m not tripping.Â Â  Iâ€™m just saying the music we love is something that we literally feel inside of us.Â  When a song truly gets you, it becomes timeless and immortal.

I had the privilege to see Dave Masonâ€™s Traffic Jam live at the Brighton Center for the Performing Arts on Saturday (2/8/2014) in Brighton, Michigan.Â Â  The music performed by this Rock and Roll Hall of Fame artist is timeless and resonates deeply with his fans.

Dave Masonâ€™s Traffic Jam is a musical journey that takes the audience to the cottage in the countryside of England where Traffic was born and back to present day with new music to be released toward the end of April 2014 on Daveâ€™s website.

With a picture of the Aston-Tirrold cottage as a backdrop, Dave and his band start us off with the dark tranquility of (Roaminâ€™ Throâ€™ The Gloaminâ€™ With) 40,000 Headman.Â  The playful 60â€™s vibe rang clear on You Can All Join In.

We then road in hot with Pearly Queen and Dave took a couple minutes to chat with us about the cottage in the country.Â  A bunch of kids out in a cottage with no running water or electricity, just making music and doing ‘research’!Â  They burned down the outhouse for heat and ran generators to jam outside on the car port, which became a makeshift stage.Â  Talk about a trip!

Tony Patler (keyboards) took the vocal reigns for a groovy rendition of Who Knows What Tomorrow May Bring.Â  I think the song Heaven Is In Your Mind captures that ‘Traffic’ sound with its rich melodic structure.Â  Guitarist Jason Roller lit up the solo on this number.

Dave relayed that Medicated Goo was an outpouring of the voluminous catalog of ‘research’ performed at the cottage.Â  I have to believe the research materials available to these fellas were outstanding!

At first, I couldnâ€™t quite place the next tune as it started out with some sultry guitar work by Mr. Mason.Â  Once the lyrics started, I was surprised to hear this soulful tune was none other than The Low Spark of High-Heeled Boys.Â  The slight rasp in Daveâ€™s vocals combined with a sensational solo made his rendering of this classic a favorite in my book.

The pace picked up a bit as we enjoyed a bit of Rock â€˜Nâ€™ Roll Stew.Â  It was then time to introduce a special guest on the acoustic guitar, Fred the Bus Driver!!Â  Fred fired up the opening riff to Dear Mr. Fantasy.Â  Dave Masonâ€™s Traffic Jam adapts the original song into what could easily be theme music for a Robert Rodriguez film.Â  It poured over all of us like warm desert wind.

The second half of the show focused on Dave Masonâ€™s solo work starting out with the crowd favorite, We Just Disagree.Â  The good times kept running with Just A Song and rolled into World In Changes.Â  This song had some outstanding drumming by Alvino Bennett.Â  I really loved his setup with the cymbals set up high.

How Do I Get To Heaven was poignant ode to original Traffic drummer and lyricist, Jim Capaldi.Â  As Dave mentioned during the show, heâ€™d been working with Jim shortly before his death (in 2005).Â  This started out as an idea by Jim which Dave then re-crafted after he passed away.

From Daveâ€™s 2008 26 Letters â€“ 12 Notes, we were treated to the fantastic blue jam, Good 2 U.Â  If this had been an open hall, Iâ€™m sure many people would have been on their feet.Â  Once again, guitarist Jason Roller floored the crowd with a dazzling solo (sweep picking and all!).

The summertime, feel good, Let It Go, Let It Flow was entertaining and had many people in the audience bobbing their heads.Â  Shouldnâ€™t Have Took More Than You Gave is one of my favorite Mason tunes.Â  Again, you can feel that Traffic vibe in this music.Â Â  The words are just as meaningful today as they were when it was originally written.Â  The solo by Dave was mesmerizing with some tasty wah wah accents.Â  I noticed during this tune that Daveâ€™s telecaster has humbucker pickup in the bridge. Interesting!

Back when Dave was 19 on the Greek island of Hydra, he started vamping a two chord progression which turned into Feelinâ€™ Alright.Â  Dave laughed a bit introducing the song as it was recently used by Bank of America, so heâ€™s got the bank paying him for a change!Â  The Dave Mason Traffic Jam performance of this classic was really funky with a lot of great jazzy licks by Jason Roller.Â  Jasonâ€™s phrasing reminded me a lot of the great Larry Carlton.Â  A great song to close out the show!

After a short break, Dave and his band were back for an encore performance of All Along The Watchtower.Â  This was definitely in the vein of the Hendrix cover of this Dylan tune.Â  The entire band rocked this one, with Dave providing a stellar guitar solo that included two-handed tapping (watch out Mr. Van Halen!).

Be sure to stop by Dave’s website at www.davemasonmusic.com and check outÂ Dave Masonâ€™s Traffic Jam when they ramble over to your town!