Those in attendance witnessed the re-birth of metal when it was heavy and fun before all the hairspray and pop glam as Black Veil Brides played to a packed house consisting mostly of young people.

The electronic shock pop duo, Drama Club, opened the night. There are no barriers in music nowadays as todayâ€™s youth has a broad range of musical tastes and are very open minded. Blending rock, electro-house, and everything in between, Drama Club had the crowd dancing to their remixes of such acts as Andy Biersack’s Andy Black project, Prodigy, Bring Me The Horizon, and Motionless In White, to name a few, as well as their debut single “Halloween365.” 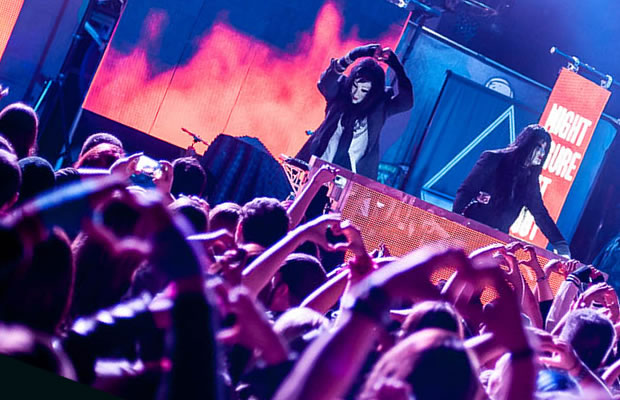 Following Drama Club was the pop-punk influenced rock band, Set It Off. Based out of Tampa, Florida, these guys recently released their sophomore full-length album, Duality, on Equal Vision Records. The album was included in Alternative Pressâ€™ “Most Anticipated Music of 2014” issue. They blasted through a short 30-minute set. The crowd seemed to love every minute of it as the kids were pointing their fingers toward the stage and singing along.

Drama Club hit the stage for a second set as the stage-hands broke down Set It Offâ€™s equipment and prepared the stage for Falling in Reverse.

It appeared the audience response to Falling in Reverse was to rival Black Veil Brides. You could hear the thunderous screams while the band took the stage opening up with â€œSink or Swim.â€ An interesting aspect about their stage set up was the drum set. The inside of the drums were filled with rope lights which lit up the entire drums. The drums would change color as the stage lights changed.

The audience sang along to many of their songs such as, â€œThe Drug in Me Is Youâ€ and â€œBad Girls Club.â€ The band had some technical difficulty during the middle of their set, so their singer, Ronnie Radke, threw a blow-up basketball out into the audience and gave fans a chance to make a throw into a basketball hoop that was set up on stage. This helped pass the time and the fans loved it.

Reminiscent of Motley Crue during their â€œToo Fast for Love/Shout at the Devil” era mixed with a little modern day flare a la Avenged Sevenfold, Black Veil Brides immediately connected with their audience and gave them over an hourâ€™s worth of heartfelt entertainment. 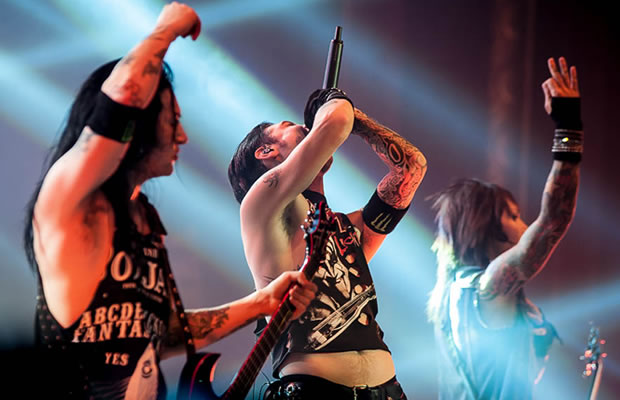 Singer Andy Biersack took the stage with horns in the air as the bandâ€™s intro segued into, â€œHeart of Fire.â€ You could feel the vibrations in the floor as the crowed swayed in unison to the beat of the music. â€œ1, 2, 3, go,â€ said Biersack as the band broke right into, â€œI Am Bulletproof.â€ The crowd sang the chorus so loud, it almost overpowered the band.

â€œDetroit Rock City, how are you motherfuckers doing tonight?â€ Biersack asked. â€œWe are Black Veil Brides from Hollywood, California and itâ€™s good to be back here with you tonight. How many of you have seen us before? Well, we are going to play you a song you have never heard us play live before. Itâ€™s called ‘Coffin.’â€ Dubbed the BVB Army, this tribe of fanatic followers was emotionally attached to the band from the first note as Biersack lit up the entire room with his smile.

â€œDetroit, we just put out a brand new fucking record about two weeks ago. Itâ€™s called Four. How many of you have it already? Weâ€™re gonna play a song off the new record called â€˜Faithless,â€™â€ Biersack said. He followed up the song with, â€œAre you guys having fun out there tonight? We are gonna play a song off of our last album. Some of you might have heard it before. How many of you have our album Wretched and Divine? Well, this song is called, â€˜Wretched and Divine.â€™â€ The crowd pogoâ€™d along from the first note to the very last note.

The band held their guitars high in the sky as they segued right into â€œKnives and Pens.â€ All it took was Biersack to say â€œI want to see you fuckerâ€™s go crazy, okay?â€ and the crowd went completely nuts while also singing along loudly to the chorus.

The band walked off stage while a symphonic overture played. Biersack walked back out onto the stage and enticed the entire crowd to wave their arms back and forth as the overture progressed into â€œShadows Die.â€ Jinxx, the rhythm guitarist, switched to the violin during this song. As the song ended, Biersack held his hand high up to the sky while everyone repeated this same action. He then continued waiving his arm back and forth in unison with the crowd.

â€œDetroit, are you still alive out there?â€ asked Biersack, continuing with, â€œIâ€™d like to introduce the band to you. On drums we have CC (Christian Coma). On rhythm guitar and violin we have Jinxx. On lead guitar we have Jake (Pitts). On bass guitar we have Ashley (Purdy).â€ Another band member stated, â€œand on vocals we have Andy Biersack.â€

â€œWe have a friend out there in the audience who asked us to play â€˜Lost It All,â€™â€ stated Biersack. He continued with, â€œWe want to try this a capella for you, so will you sing along with us?â€ The audience harmonized with the band and pulled it off wonderfully. â€œThank you very much,â€ said Biersack. â€œThis oneâ€™s called â€˜Last Rights.â€™â€

Biersack placed his hands in a praying position and bowed to the audience as the band then played â€œRebel Love Song.â€

â€œDetroit. Repeat after me,â€ Biersack stated as he chanted â€œCC, CC, CC.â€ The band left the stage as CC played his drum solo. One by one, the rest of the band members found their way back to the stage as the drum solo started to come to an end. With horns in the air, Biersack stated â€œLet me see your fucking horns in the airâ€ and the band played â€œLegacy.â€ 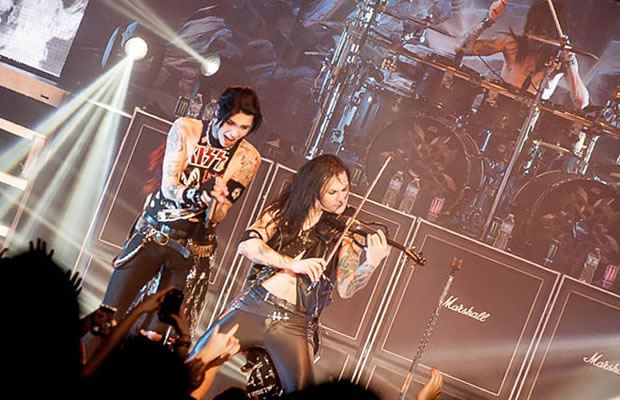 Following the song, Biersack stood center stage while everything fell silent around him. He smiled, and the thunderous cheers of the audience rebound. â€œHow many Black Veil Brides fans do we have here tonight?â€ he asked. â€œWe are gonna play a song off of our very first album. Itâ€™s called â€˜Sweet Blasphemy.â€™ Sing with me if you know it.â€

There was a bit of a bass guitar solo as Biersack yelled out â€œThis one is called â€˜Perfect Weapon.â€™ Michigan, I want you to sing along with us.â€ Biersack held the microphone out to the audience during the song as Purdy yelled out, â€œEverybody get up,â€ and the crowd started pogoing again.

â€œDid you guys have a good time out there tonight? Have you enjoyed The Black Mass tour so far? Letâ€™s give it up for all of the other bands on the tour,â€ stated Biersack as he mentioned their names. â€œWe are Black Veil Brides and this is our last song for the night.â€ With fists held high, the crowd sang along to â€œFallen Angels.â€ Biersack stood directly in the fog shooting up from the stage that it enveloped him. Eerily, he looked up toward the audience and stated, â€œThank you. Good night.â€ The band walked off stage as darkness descended upon it.

All you could hear was, â€œIn The End,â€ being chanted from the crowd over and over and over. The band walked back onto the stage to thunderous cheers. â€œMichigan, you want to hear one more song tonight?â€ Biersack stated. â€œWell, you gotta tell us what song you want us to play?â€ as the audience continued chanting â€œIn The End.â€ The band quickly kicked into the song while the audience sang every word at the top of their lungs. Biersack held his devil horns up high in unison with the guitars and stated â€œThank you so much. Good night Michigan.â€

The band made their way to center stage and took a bow as Danzigâ€™s â€œTwist of Cainâ€ played in the background through the house speakers.

Each member of Black Veil Brides connected so well with each other. This connection transferred to the entire audience. They romanced the crowd with their talented musical skills and a dazzling light show. Black Veil Brides brought their big arena rock sound to this smaller sized theatre and the crowd was in adoration over it. They gave their hearts to the audience and, in return, the audience gave them their souls.