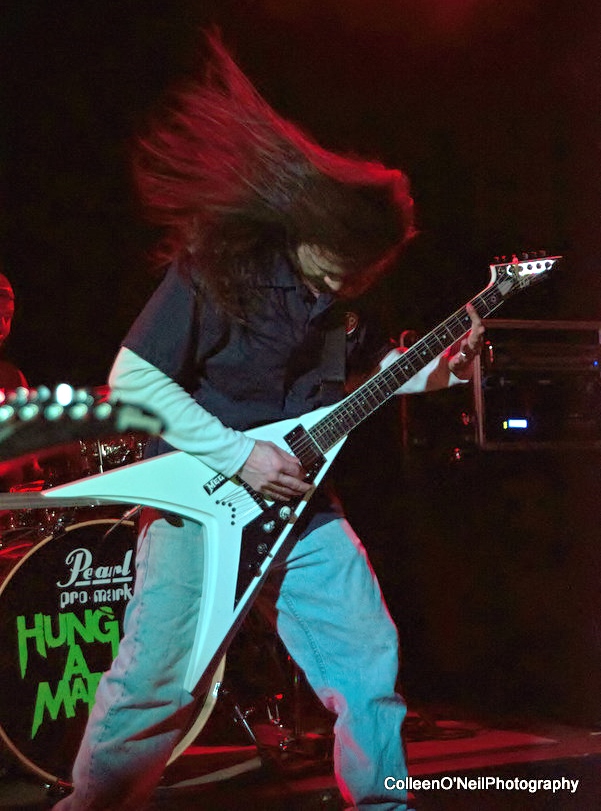 Anchorlines, a New Hampshire band formed in 2009 who has successfully blended metal and hardcore, rolled into St. Louis on April 11, 2014. They were the touring band supported by St. Louis locals Hung Like a Martyr, Facing Infamy, and Silent Hollow.

Although Anchorlines is unsigned at the moment, this talented quintet’s thought-provoking lyrics, powerful vocals, and colossal sound is sure to catch the eyes (and ears) of record industry personnel as they continue their 2014 tour of the US that spans from New England to the Midwest. The band consists of Jeff Higgins on vocals, Nick Edwards on guitar, Luke Dimond on guitar, Ryan Boehlke on bass, and Corwin Bermudez on drums.

I had the distinct pleasure of interviewing the members of Hung Like a Martyr. The band consists of Gary Johnston on vocals, Paul “Batman” Dontigney on guitars, Erik Spiller on guitars, Adam “Adamned” Fuchs on bass, and Curtis Toler on drums.

During the summer of 2009, Spiller and Dontigney reunited after a 10-year hiatus in a collaborative effort based on their mutual love for classic metal, science fiction, and horror movies. Their vision started taking a more definitive form in 2010 when they enlisted the talents of Fuchs and later Johnston and Toler (who replaced earlier members). This current lineup is one of the most tightly knit and hardest working bands I have seen. Their mutual interests and common backgrounds in the music industry serve as the foundation, but their complementary personalities strengthen it further and this shows in their performances and overall showmanship.

All five have long-standing roots in the St. Louis music scene, not only as musicians, but also behind the scene working as stagehands, lighting and sound, and instrument repair and painting. Toler was playing double bass to a Lit song at House of Rock, when he was ‘discovered’ by Fuchs and was brought on board almost immediately. Toler admits his Air Force background makes him the most rigid and structured member, but Dontigney’s sense of humor reels him in and keeps the mood light for everyone.

Hung Like a Martyr is committed to the hard work necessary for long-term success in the music industry, generally playing one show per month to keep their show fresh and the fans interested without sacrificing quality. Spiller lamented on the decline of the St. Louis music scene, commenting on a number of causes, not the least of the disappearance of some of the better venues for DIY bands (Mississippi Nights and Bernard’s Pub). Additionally, Spiller criticized the record industry’s hesitancy to invest in more than the quick and easy single and not the band that will bring in longer term returns, and misses the days when more bands relied on a ‘ground campaign’ in addition to good music to increase their fan base.

While Hung Like a Martyr has taken advantage of getting out their songs through the Internet (Sound Cloud, ReverbNation, Facebook, and Bandcamp), they have also finished a good old-fashioned CD to sell at their shows. Just as important, they are making headway in getting on larger shows, such as Hellyeah in August of last year and they will also be opening for Anvil in May.Their sound is an updated version that is still definitively rooted in classic metal, with lyrics reflecting their interests in sci-fi and horror movies.

Facing Infamy, another five-piece powerhouse, played an energetic set. Formed in 2011, they were probably the youngest band of the night, but they certainly seemed like seasoned veterans onstage. Backed by the dual guitar talents of Bill McMullen and Mike Ventimiglia, Matt Schroeder’s clean and melodic vocals shine through, giving a nice contrast to the pounding rhythms of bassist Justin Wilbourn and drummer Kyle Davis. Their sound is an eclectic mix of punk, pop, and metal with some hardcore roots showing through. Look for Facing Infamy competing in The Battle for Pointfest 2014 at Pop’s in Sauget, Illinois for a spot in 105.7 The Point’s upcoming festival show at Verizon Wireless Amphiteater in June.