New album Erase Me out now via Fearless Records.

Underoath are proud to announce the addition of Crown the Empire to their forthcoming Erase Me Tour, which kicks off November 2 in Nashville and wraps in mid-December. Previously announced support acts include Dance Gavin Dance and The Plot in You. 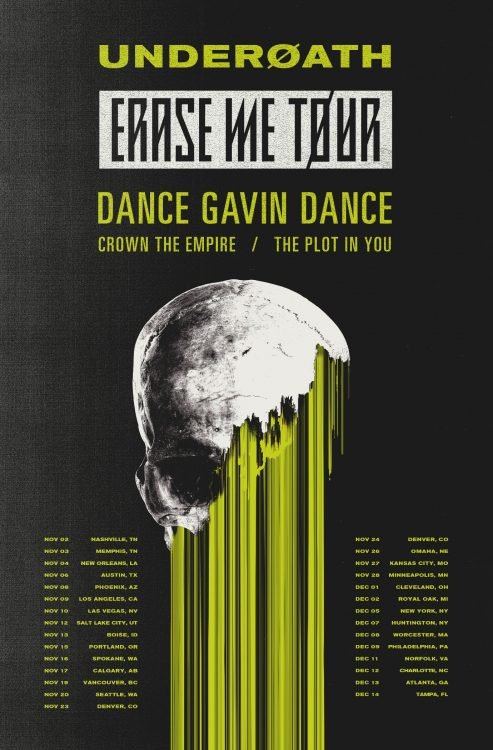 The Erase Me Tour is the band’s first major market headline tour in support of their new album Erase Me via Fearless Records, which recently debuted at #4 on the Billboard Top Album Sales chart. The tour finds Underoath returning to many markets they previously sold out on their incredibly successful Rebirth Tour.

The band is slated to perform at several landmark venues, such as The Shrine in Los Angeles. Underoath will close out the tour with their first-ever headline arena show at The Sun Dome in their hometown of Tampa. This date serves as the band’s sole appearance in its native Florida this year.
For all tour information, go here.

ABOUT UNDEROATH:
Erase Me represents a watershed moment for the gold-selling heavy music luminaries whose inescapable influence can be felt in nearly every corner of hard rock. Not only did it mark the group’s first new album since 2010, but it crashed the Billboard Top Hard Rock Albums Chart at #1 and vaulted into the Top 20 of the Billboard Top 200. It sees the band refine its trend-setting but inimitable style with heavy intensity and hypnotic hooks coursing through songs like “Rapture,” “On My Teeth,” “Wake Me,” and “It Has to Start Somewhere,” which have cumulatively tallied over 10 million streams in a few months’ time—a rare and impressive feat for any rock band. That’s just the beginning, though. This tour takes things to the next level.