The “Metal Queen” Doro Pesch, a solo artist and original member of the German 80s metal band, Warlock, is celebrating her 35th anniversary of performing live and is still blazing a trial for old school heavy metal across the globe after all of these years.

NRR: Thank you so much for taking the time to speak to us today, we really appreciate it – it’s always good to chat with you. So first of all, you are currently out tour with Saxon – we’ve just seen you destroy it Newcastle tonight. This is the third show of the run and obviously, you’ve just come offstage at Newcastle City Hall. How have the shows been going so far for you?
Doro: It was great, like, you know, we’ve toured with Saxon before in the UK, I think it was eight years ago – nine years ago. It was always great, we are a good team, we love each other. I was always a big Saxon fan when I first started. Playing the UK is so special to us because you know, here I feel that’s where everything started for us, like the first records, the first touring experiences. My first tour was actually in ‘86 with W.A.S.P; before we did some club gigs like you know, magazines, and T.V. stuff. That was all like so advanced, so England was like, wow – it was really great.
Yeah, and tonight we had a great time. The tour so far was great. We’re coming back in March – London on the 13th March and Manchester on the 12th of March, and then we play the Hard Rock Hell – yeah, we got confirmed a couple of days ago. So yeah, then I think there are some more things in the making in the UK because it’s all going really well – the fans are diehard fans, you know, you can always count on them. You know, in every city there are some fans who came to the show 20 years ago.
NRR: So obviously this marks your 35th year of touring and your live stage anniversary. Do you still enjoy performing live as much now as you did back in the day? 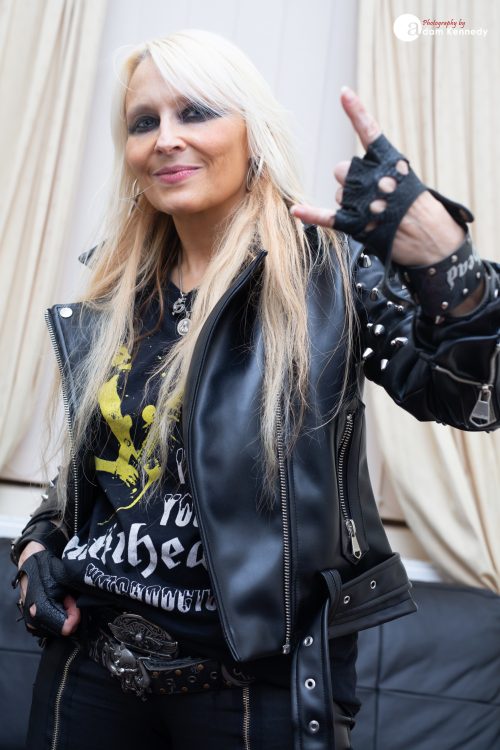 Doro: Yeah, totally. Totally. Yeah, totally. Even more because now I can appreciate it more. You know, when you start doing something and all, you know you do it and you have fun, but you don’t really know what it means. Now, you know, I know it means a lot and I appreciate it more now, because in the early 80s when metal became big you thought it would always go bigger and so when grunge hit it was shoved to the side and it was like oh my God. And then when it came back it was about 2000, we did this tour with Ronnie James Dio in the States, you could tell there was a little bit of the traditional metal coming back. From then on I’ve felt like it’s going great again. But yeah, sometimes more like you always go up and down, up and down, and then you learn from it. But I totally enjoy it every night. Every gig I treat it like it could be the last and give it my all.
NRR: You recently released a new album which is Forever Warriors, Forever United, which is the 20th studio album that you’ve done – which is amazing. And this is also your first ever double album featuring 25 new songs. I was just wondering when you started working on this record, did you have a double album in mind?
Doro: No, it suddenly all came together, it was so nice. It was like it was just coming out, all of these ideas. You know, I heard from so many people, for example, I have some American friends and studios saying, hey, why do we even do a whole record -bands these days, they do only two or three songs? I thought no man, I’m old school, I like to have a real record, like you know I still love vinyl and CDs and something to have in your hands.
And then we started with so many songs and I thought yeah, that I want to give it the best of the best, you know, not just like 10 songs. Suddenly it was 25 songs and honestly, it started with the song for Lemmy. I went to his funeral and I was on the plane and then suddenly this melody and lyrics, they popped into my head, living life to the fullest. I thought I’ve got to record it right away, and I recorded it on my cell phone. And then I called a friend of ours and I said I want to record it right away. He lives in Hamburg, we did many, many songs and records together and he was the one who recorded Lemmy and I on the last Raise Your Fist album, we did “It Still Hurts”. And Andreas, he’s the ex-guitar player of Sisters of Mercy. Andreas, he was mixing it and producing it and so he knows how much I love Lemmy. And then I said I want to record it right away and that was actually the start over two and a half years ago.
We had some songs here and there floating around really too, you know, to say okay now this will be the new record. Because we were two and a half years on the Strong and Proud DVD; that was for the 30th anniversary and it took two and a half years to do, to make it nice. It’s like a three-CD package, like a DVD package – it’s nice. Yeah, it takes a long time to really get it nice.
NRR: So with all of that material, at any point did you think right I’m going to stop and maybe turn this into two albums instead of a double album?
Doro: Yeah some people said how about you do that and then I thought no, I want to do a double album right now. Not one now and one next year. I think it should be fresh – who knows what in one year, you know, you might have different ideas or it could be turning or changing so drastically. So I thought let’s do it now, and that’s how I feel now. And when I learned that it’s okay to do a double album, because I had to first ask the record company, because it’s very unusual in this day and age. But then they called back and said yeah do it.
All of my favourite songs are on it, like this cover version of David Coverdale. That was my first rock/metal concert, it was in 1980 and it was so great, and my first band was called Snakebite. So I was a big fan, and that song “Don’t Break My Heart Again” – I love. So when they said we can do a double album I said I want to do stuff what means so much to me.
So we recorded this song and then the song called “Caruso” – the Italian song. Because I’ve recorded many things in Spanish and French, and Portuguese and we toured last year in Italy and the Italian fans said you’ve recorded in all kinds of languages but never in Italian. My guitar player Luca is from Italy and I asked him if he could coach me Italian, and he did and I think it came out really nice.
I could do some stuff, which normally I wouldn’t have had the chance to put it on an album. The whole record, there’s some special things and two things for Lemmy, it’s dedicated to Lemmy. “Lost In The Ozone” is another Motorhead song. So yeah, it started with “Living Life To The Fullest” for Lemmy and it should end with “Lost In The Ozone”.

Doro’s new album Forever Warriors, Forever United is out now via Nuclear Blast. Doro will be returning to the UK for two special shows in London and Manchester in March. 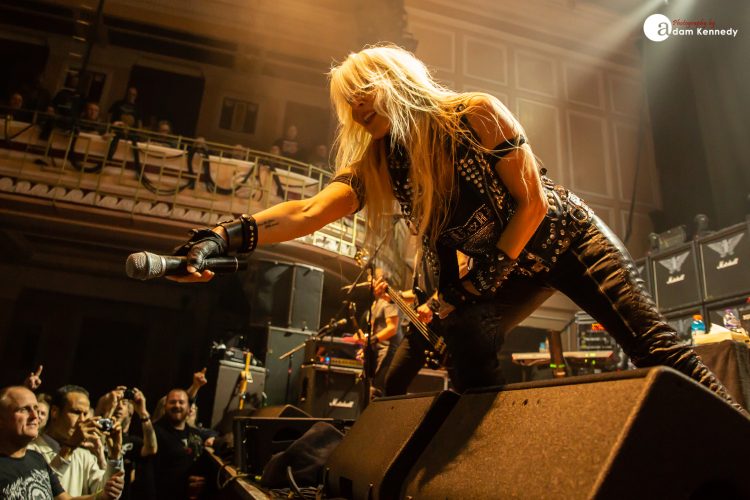