Sean Pinchin riffs his way on top of gut punching blues to ask some truly philosophical questions on Monkey Brain.

If you’re looking for a ticket to hot blues licks and good-old fashioned kicks, while wondering what you are doing with you life, you might find yourself on the Sean Pinchin Monkey Brain train. The album is his first since 2013’s “Rustbucket,” although he has a catalogue dating back to 2007.

This particular installment in the Pinchin discography is a roots album on the surface. But make no mistake, this sounds more like a blues-rock album that has the stamp of approval from his influences Sonic Youth, Bryan Adams, and Robert Johnson. 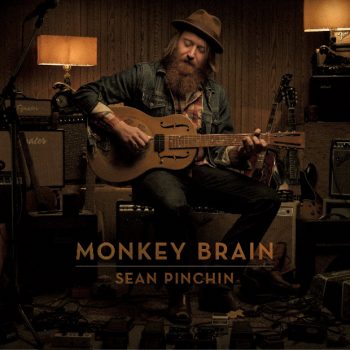 From the get-go, this album emits an upbeat vibe beginning with the title track, “Monkey Brain.” The toe tapping and roots rolling continues with the memorable “Can’t Stand It.” The album dives into some deep topics with the pulsing “Charity Case” and “Hard Luck.” The blues are on full display on these tracks as Sean discusses addiction, fear, and downright tough times.

Seans’ vocals make you believe his pain, but his guitar playing is the reason to come back for more. His quick, rugged strumming style is on full display on “Living In The Past” and “Monster,” before firing off one more memorable riff on “Get Burned,” the final song on Monkey Brain.

Fans of The Black Keys will feel at home listening to Monkey Brain, with a rowdy pace reminiscent of the demolition rock-blues style the Akron duo rode into the stratosphere. While, yes, that may be a lofty comparison, nobody seems to have told the Canadian Pinchin that the US Market, home to an endless stream of pop acts, isn’t exactly a hotbed for new solo blues artists.

Drummer Adam Warner & bassist Mark McIntyre stand behind this crusade of genres that has Sean Pinchin written all over it by delivering an excellent, driving rhythm section. Emma-Lee’s backing vocals may be the glue that holds this fragile, but rambunctious, sound together. The transient nature of this group’s sound forces the listener to confront one of life’s great questions: Can you stand it?

Monkey Brain is available on iTunes and Amazon.