From humble beginnings in 1983, until the sudden loss of guitarist Mike Scaccia in 2012, Texan speed/thrash metal band, Rigor Mortis, has led a fascinating life.

Rigor Mortis was born in Arlington, Texas, in 1983, by Casey Orr (bass), Harden Harrison (drums), and Mike Scaccia (guitar); three guys who shared a common interest in horror/gore films and extremely heavy music. The band took shape when they added vocalist Bruce Corbitt in 1986 and found themselves paving the way for the late 80’s Dallas/Fort Worth extreme metal underground.

Rigor Mortis was one of the few thrash bands in Texas and created their own metal scene. These guys were fans of punk rock and, over time, they became a large part of the crossover sound. With an emphasis on speed and subject matter heavily laden with horror and gore, they created a unique blend of extreme thrash and death metal.

They became a driving force in the original wave of North Texas Metal and quickly signed to Capitol Records, releasing their classic self-titled debut in 1987. This was quite a feat as Rigor Mortis was considered by many to be the first underground heavy metal band to be signed with a major label. Two years later, Corbitt was fired from the band and replaced by Doyle Bright.

On leaving the band, Corbitt stated in an interview with the Dallas Observer, “That was harder than any other time in my life. It was personal differences between some of us in the band. You can always say musical differences and all that, but it was mainly that we started getting on each other’s nerves. We were young and couldn’t overlook our differences at the time. That was unfortunate.”

With Bright on vocals, they released two more albums before calling it quits in 1991. Scaccia joined Ministry as well as Revolting Cocks, 1000 Homo DJ’s, and Lard. Orr joined GWAR (as the character Beefcake the Mighty), and also played with Ministry, Ex-Cops, The Hellions, and Warbeast to name a few. Harrison went on to play drums with Pervis, Speedealer, and Mitra. Bright would end up in Hallows Eve.

Corbitt has been enjoying recent success with Warbeast. Originally formed in 2006 under the name of Texas Metal Alliance, the band changed their name to Warbeast in 2009 and signed with Phil Anselmo’s Housecore Records.

The official reunion of Rigor Mortis was a long time coming. The first sign came in 2005 when the original lineup got together for a show. This was followed up with a Texas performance at Ozzfest in 2008 and Germany’s Keep It True Festival in 2009.

According to an interview Corbitt did with the Dallas Observer, he had this to say about them reuniting, “We have just grown up. We knew that we made a lot of mistakes back in the 80’s. We didn’t like the way it ended and we patched up our differences. We decided to try it again.”

With things falling into place, the band went into the studio to start working on the follow-up (although technically their fourth release) to their legendary debut album from 1987. The band entered Ministry’s 13th Planet Studios in El Paso, Texas in February, 2012 to start recording Slaves to the Grave, their first new album in two decades.

On December 22nd, 2012, Scaccia suffered a sudden and massive heart attack while playing onstage with Rigor Mortis. The show was in celebration of Corbitt’s 50th birthday. Scaccia was pronounced dead shortly after midnight. According to the band, Scaccia died doing what he loved, playing his music with his friends and for his friends. Fortunately, just days before he died, he was able to put the finishing touches on his tracks for what would unfortunately be his, and Rigor Mortis’, final studio record.

According to an interview Orr did with Media Mikes, Scaccia, “had actually been in the studio three days before he died and signed off on all of his parts for the album. He had finished everything he had to do and was happy with his work.”

Although Scaccia is not yet a household name, his signature thrash metal guitar work has influenced many bands such as Toxic Holocaust, Â Goatwhore, and he motivated Ministry to progress from dance music to metal. His work with Ministry pioneered a sound that has inspired many modern day metal acts such as Nine Inch Nails, Marilyn Manson, and Slipknot.

The band went back into the studio a couple weeks following Scaccia’s death to listen to what they had recorded. Orr stated in his interview with Media Mikes that, “We didn’t really do any work that first time back and from there it was a slow process. It was hard to listen to Mike’s playing. There’s some real heartfelt playing on there. Mike could transition from style to style and just sound great. That was really his strong suit. We knew Mike would have wanted us to finish these tracks and that was our drive to get things done.”

Orr further stated that the rest of the band members would not continue on as Rigor Mortis without Scaccia. After shopping the record for months, the surviving band members found that with no hope of touring to support the record, and no chance of a follow up album, labels were reluctant in releasing Slaves to the Grave. The band received tons of positive feedback but labels were fearful of not recouping their investment without an active band to promote the record.

The band decided to release the record themselves and put together an IndieGoGo campaign to reach out to the Metal community for support. The IndieGoGo campaign was a complete success. The band raised $22,838 from a $20,000 projected budget they would need to pay off their recording debt, as well as artwork, packaging, manufacturing, distribution, and promotion.

According to Orr’s interview with Media Mikes, “Rigor Mortis never had a business plan or a bank account. At the end of the night we split the money and went to the bar. Things were just so loose and punk rock. It was wrong. We were going to shop the record to a label and start talking to people however a lot of the interest we had thought was going to be there just wasn’t. We weren’t asking for a lot of money or anything we just wanted to get this record out.”

Slaves to the Grave is Rigor Mortis’ swan song. It is bittersweet as it is their comeback album as well as their final album, all at the same time. In an interview with Metal Kaoz, Orr stated “In a way it’s a relief because we had been working so hard on this, so we wanted to be done, you know. But at the same time it is the end of a big chapter of my life and the end of Rigor Mortis. But we are very proud of this album and Mike was very happy with it and very proud of it. We did everything we could to make this a proper and strong release and keep in mind that we did everything on our own, without a record label to support us.” 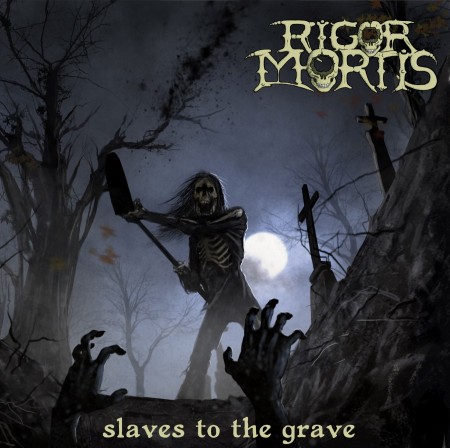 Slaves to the Grave was released on October 6, 2014, two and a half years after the band completed recording it. The album isn’t as raw as their debut album, however the band has included many of their signature sounds into it. Rigor Mortis have created an album that has the same passion and energy of their 80’s speed/thrash metal sound blended well with an updated strong sound planting their feet down firmly in today’s Metal world. This, being their last will and testament stays true to their original sound and just may be the best representative of old school thrash in today’s modern age.

The highlight of this album, and even Rigor Mortis, is the distinct and inventive talent of Scaccia. He can really shred and his intense guitarmanship shines throughout the entire disc. Backed by Orr’s pounding bass rhythms, Harrison’s blistering drum beats, and Corbitt’s deep commanding vocals, Slaves to the Grave is a worthy outing to have in any metalhead’s collection.

This is a much more mature sounding Rigor Mortis. The lyrics are violent but have moved away from the campiness of their old school days. The music is dark and matches the lyrics perfectly. In his interview with the Dallas Observer, Corbitt had this to say about the band’s updated sound, “We have all gotten so much better than we were when we did our first album. We have the experience to make a better album. We always had some melodic parts to our music that some people haven’t noticed. We wanted it to flow nicely. It can go a million miles an hour and then it can get into a melodic, evil-sounding part. I would say it sounds different, but it undeniably sounds like Rigor Mortis.”

In the statement for their IndieGoGo campaign, the band stated, “The impact that Mike had on all that knew him is immeasurable. In life he touched us all with his talent and his sense of humor and his friendship. His passing changes everything for many of us. There will never be a fifth Rigor Mortis record. We will never play another show together as Rigor Mortis. Worst of all we’ll never laugh the way we used to. But we will keep the flame burning. For Mike, for his family, for ourselves, and for the fans.”