International supergroup The Dead Daisies continue on their mission for world domination with their latest album Make Some NoiseÂ and don’t they just.

Over the years, The Dead Daisies lineup has been graced by a veritable who’s who of the rock world including Jon Stevens (Noiseworks), Darryl Jones (Rolling Stones), and more recently Dizzy Reed and Richard Fortus, who have now left the group to rejoin Guns N’ Roses. Earlier this year, the band welcomed ex-Whitesnake/Revolution Saints axeman, Doug Aldrich, to the fray. 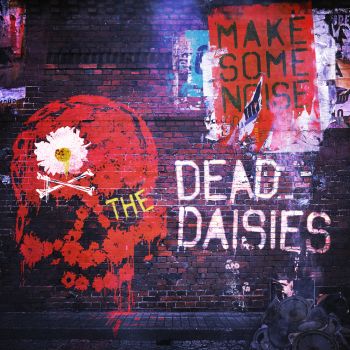 With The Dead Daisies’ latest offering, Make Some Noise, the band created a straight up, no messing hard rock record. The Dead Daisies are not leaning towards any particular trends or fashion; they deliver what they know best, timeless rock n’ roll music. Their collective wealth of experience and classic rock influences fuse together seamlessly in a way which makes their music sound oh so familiar yet at the same time, fresh and new.

Straight from the start, the band set out their stall in making some noise so to speak with theÂ hard rocking opening number “Long Way To Go,” which features almost AC/DC-esqueÂ guitar riffs. John Corabi proves why he is one of the best vocalists in rock with the incredibly catchy “We All Fall Down.” However, it is “Song And A Prayer” which stands out on the album. The reverb-filled opening guitar licksÂ and itsÂ infectious chorus is reminiscent of classic Van Halen, truly a special number indeed.

The frantic “Mainline” comes hurtling at you like a freight train. The title track of the album has all the characteristics of a hard rock classic, think “We Will Rock You” meets “I Love Rock and Roll.”Â Make Some Noise is also jam-packed with stadium-filling anthems with “Last Time I Saw The Sun” and “How Does It Feel” both falling into that category.

With this, the Dead Daisies third record, the band has delivered their best record to date, there is not one bad number on the album.Â Despite this being the first album from the current incarnation of the band, the recording sounds like they’ve played together all their lives. Unlike many other supergroups who have fallen before them, the Dead Daisies have longevity and are here to stay.