Tune in Friday, August 24 at 9:00 pm ET/PT to watch the broadcast premiere of the concert special “Billy Raffoul” on AT&T AUDIENCE Network via DIRECTV Ch 239, AT&T U-verse Ch 1114. The show will also be available streaming on-demand through DIRECTV NOW. 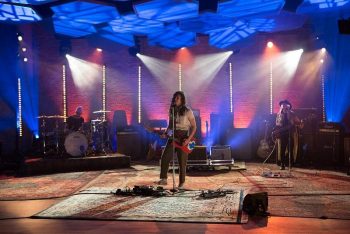 Billy Raffoul grew up in a creative family in the small farming town of Leamington, Ontario. His mother is an artist, writer and teacher and his father Jody Raffoul is a solo artist and hometown hero who has opened for everyone from Joe Cocker to Bon Jovi. Raffoul’s earliest musical influences come from his dad. “The Beatles were like Jesus in our house,” he recalls, adding that he also listened to soul singers like Otis Redding and Sam Cooke. On his tenth birthday, Billy received a British Invasion-inspired guitar with a Union Jack on its front from Jody and started teaching himself to play. By 16, he had bought his first real guitar, a 1968 Gibson Les Paul Black Beauty.
Raffoul’s debut EP, ‘1975’ (Interscope Records) was released earlier this year to critical praise. American Songwriter proclaimed Raffoul’s track “Could You Be Mine?” a “yearning ballad,” while Ones To Watch said, “His gritty voice and guitar-strumming virtuoso will likely paint the picture of a well-seasoned rock & roll veteran.”

After spending the past two years on the road sharing the stage with Kings of Leon, ZZ Ward, Mondo Cozmo, Judah & The Lion, Billy Raffoul is back on tour supporting NEEDTOBREATHE and more. For all Billy Raffoul tour dates, visit his website.

AUDIENCE Network’s multiple series of original and exclusive performances give music fans an intimate view of music’s most influential artists today. The network collaborates directly with musicians to create a unique show from their perspective.