The much-anticipated debut album from the South Yorkshire alt-rockers, Hands Off Gretel, is here!

Hands Off Gretel has been wowing fans with their stage shows, something that has encouraged them to support the band’s next release via crowdfunding. Their new album, Burn The Beauty Queen, was recorded in Wales and is an entirely independent affair and sold via the bandâ€™s website. 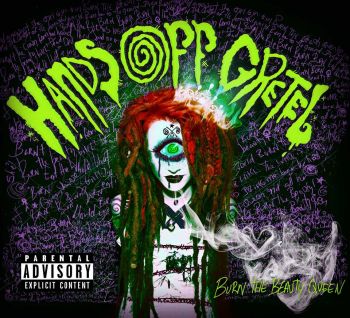 The multi-talented 19-year-old Lauren Tate is the lead singer of Hands Off Gretel. She also designs the bandâ€™s posters, merchandise, and album artwork as well as produces their videos. Plus, she writes some bloody great, catchy songs, too!

The album starts as it means to go on. â€œQueen Universeâ€ has Laurenâ€™s screaming vocals flying over great guitar riffs. The first single from the album, â€œOne Eyed Girl,â€ has a feisty riff to it, and fierce vocals to match. This number is guaranteed to have you moving.

â€œBad Eggâ€ builds slowly and softly, before a sledgehammer ending. â€œTeethinâ€™â€ features some great guitar work from Sean McAvinue, and is scheduled as the next single. â€œAlways Rightâ€ could be a contender for a further single â€” itâ€™s a rocking, catchy, riff-filled song, which gives Lauren another chance to show her colours.

â€œWorld Against Sheâ€ wouldnâ€™t seem out-of-place on a Nirvana album, with more high-energy guitar and a solid rhythm. â€œEating Simonâ€ is an interesting title and an interesting song lyrically, and musically reminiscent of early Cure material in parts.

The album material provides an insight into an interesting life, each track having a story to tell. â€œPlastersâ€ and â€œPush The Girlâ€ are certainly no different, with the latter having a dark feel to it. â€œAwfully Miserableâ€ finishes the album with a mix of melancholy and hard-hitting reality, starting quietly and building to a crescendo of thrashing drums and guitar with fiery vocals, before mellowing again.

Think Courtney Love meets L7 meets Nirvana, and you will have an idea of the make-up of the album. Itâ€™s certainly an excellent debut! But donâ€™t just take my word for it â€” get over to the bandâ€™s web-site and order it for yourself.

Burn The Beauty Queen is available from their website on 16 September, but can be pre-ordered now.

As well as having two launch gigs in London and Barnsley, the band are heading out on tour to promote the album. Hands Off Gretel put on a great live show, too. Check them out when you get the opportunity.