In recent times, King King have firmly established themselves as one of the leading groups on the European blues-rock touring circuit.

The band’s critically acclaimed latest studio album, Reaching For The Light, was recently voted Album of the Year at the British Blues Awards.

With countless accolades behind themÂ and an ever-growing fanbase, it seems like now would be the perfect time to capture some of the live magic which has filled concert halls across the land at this milestone point in the band’s career.Â What better way to do this than to record their live album in front of Alan Nimmo’s hometown crowd at the O2 ABC in Glasgow. 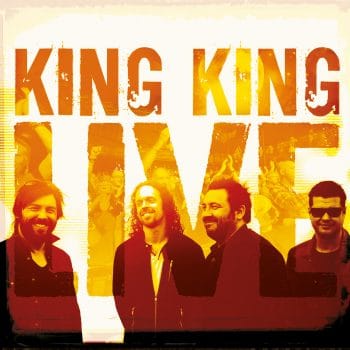 The 90-minute live recording traverses the band’s whole career. Straight from the off, King King launches into the up-tempo “Lose Control”. Alan Nimmo encourages the audience to “jump up and down and make some noise” and don’t they just.

The band’s award-winning single, “Rush Hour”, recently scooped Blues Song of the Year at the British Blues Awards and, with the live version captured during this performance, it’s easy to understand why. Nimmo has the audience eating out of the palms of his hands throughout the song, as they engage in some call and response.

Tracks like King King’s take on the Fabulous Thunderbird’s number “Wait On Time” and the classic “Long History of Love” from the band’s Standing In The Shadows album highlight the incredible partnership between Alan Nimmo and Bob Fridzema, who play off each other throughout.

Of course, playing in Glasgow it would be only right to include the band’s cover of “Jealousy” by another of the cities most famous sons, Frankie Miller. With King King’s latest album, their sound has moved more into the rock arena, and tracks like the incredibly infectious “Crazy” echo that sentiment. The record closes with the rather funky number, “All My Life” from King King’s debut album, Take My Hand.

All that being said, King King LiveÂ perfectly captures the essence of one of the band’s concerts. If you’ve had the pleasure of catching the band during their Reaching For The Light tour, then this record will transport you back to that moment. If you haven’t, then maybe it will give you a taste of what is to come when the band hits the road across the UK later this year.

King King Live will be released on October 21st via ManhatonÂ Records. The triple-disc live concert release includes two CDs and one bonus DVD, which was recorded at Holmfirth Picturedrome. The band will be resuming their Reaching For The Light tour starting November 9th in Brighton with support from Broken Witt Rebels.