It’s been 3 years since the band’s last studio album, but it’s definitely been worth the wait.

The last studio album by Skam was 2014’s Peacemaker.  The hard rocking trio’s latest offering took three years in the making, and in by doing so, the band has produced arguably their best album to date.

Skam’s new long player The Amazing Memoirs of Geoffrey Goddard is a concept album, but don’t let that put you off though – I mean it in the loosest of terms. The album depicts the story of a Squadron Leader who was a Test Pilot in 1935 on a secret supersonic fighter jet. As he tells us in the prologue, he is on his 13th flight which sends him from a rainy Brize Norton, through a black hole, to somewhere with a clear blue sky. 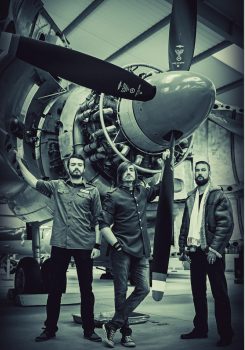 The story of the pilot unfolds and evolves as the album progresses. “Between The Eyes” is the second single to be taken from the album. The song depicts the story of that flight and is a fantastic opening track which sets the scene for the album – classic Skam songs with power and some great musicianship. “The Iron Cross” follows, relating the events of a dogfight, again with a great solid rock feel to it.

“Otherside” is pure, driving rock throughout with some great vocals from Steve over a powerful bassline set up by Matt and Neal.

“Take It Or Leave It” follows, before we have more of the story from Goddard, questioning what has happened? On the other hand, “Peace Of Mind” starts softer, then builds to a heavy chorus, with some blistering guitar riffs from Steve.

“Fading Before The Sun”, is built on a solid hard rocking foundation from the band’s formidable rhythm section of drummer Neal and bass player Matt. The track is ornately wrapped together by some great guitar shredding from Steve.

“Believe” is yet another superb driving rock song – pushing throughout in fast-forward mode to make it one of the standout tracks on the album.

As the story continues throughout the album, our hero tells how he touches back down at Brize Norton after 36 flights in four years. However, to the people there, it seemed he had only been gone for hours.

“New Dawn” finishes the album in style; with still more of the classic rock we know and expect from Skam.

In Summary, The Amazing Memoirs of Geoffrey Goddard is an amazing album, there’s not one bad track or filler on the record. It’s a classic Skam album, with a concept style. The band’s songwriting has been heightened by their great storytelling ability. This one is definitely worth adding to your record collection.

Released independently, The Amazing Memoirs of Geoffrey Goddard will be out on Nov 17th and is available on CD, Vinyl and Download via the band’s website.

In support of the album release, Skam will play a hometown launch gig in Leicester on 17th November, which has already sold out. Later this month Skam will play two further shows at The Asylum 2 in Birmingham on 24th Nov, and the Black Heart in London on 26th Nov. Get out and see them live if you can.