Home
Music News
In the Summer of 2016, Yes embarked upon an ambitious tour. At each show, the band performed its 1980 album Drama in its entirety for the first time ever plus sides one and four from Yes 1973 double-album Tales From Topographic Oceans.
Rhino salutes the influential progressive rockers who were inducted into the Rock and Roll Hall of Fame earlier this year with the new live album, Topographic Drama Live Across America. The music will be available on 24th November as a double-CD and a triple-LP. Both versions feature detailed cover art designed by the bands longtime collaborator Roger Dean. 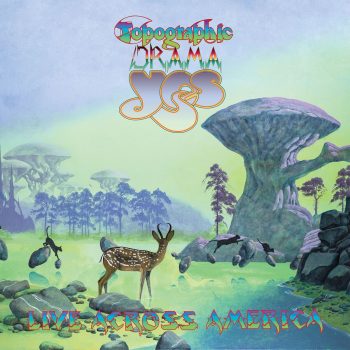 The new collection features live performances from 12 dates recorded on the same tour in February 2017, by the current Yes line-up: Steve Howe (guitars), Alan White (drums), Geoff Downes (keyboards), Billy Sherwood (bass), Jon Davison (vocals), and additional drummer for this tour Jay Schellen.
Topographic Drama Live Across America highlights the best performances from the 2017 leg of the 12-show tour and mirrors the set list from those concerts. Each night, Yes opened with all six songs from Drama (1980), the bands tenth studio album, which peaked at No.2 on the U.K. album chart. Standouts include ”Machine Messiah”, “Tempus Fugit” and the albums only single ”Into The Lens”.
After Drama, the band shifted gears for songs from two of its best-selling albums: ”And You And I” from 1972s Close To The Edge (UK platinum) and ”Heart Of The Sunrise” from 1971s Fragile (UK platinum).
Next, the group played the opening and closing tracks of its concept album, Tales From Topographic Oceans (1973). Howes exceptional guitar work on ”The Revealing Science Of God” and Whites propulsive drumming on ”Ritual” have always been regarded as ground-breaking. The album concludes with two live staples: “Roundabout” from Fragile (1971) and “Starship Trooper” from The Yes Album (1971).
Among the worlds most influential, ground-breaking, and respected progressive rock bands, Yes was founded in 1968. The Grammy-Award® winning recording artists have sold more than 50 million records in a career that has so far spanned six decades.
TOPOGRAPHIC DRAMA
CD Track Listing:
Disc One
1. Machine Messiah
2. White Car
3. Does It Really Happen?
4. Into The Lens
5. Run Through The Light
6. Tempus Fugit
7. And You And I
8. Heart Of The Sunrise
Disc Two
1. The Revealing Science Of God
2. Leaves Of Green
3. Ritual
4. Roundabout
5. Starship Trooper
LP Track Listing
Side One
1. Machine Messiah
2. White Car
3. Does It Really Happen?
Side Two
1. Into The Lens
2. Run Through The Light
3. Tempus Fugit
Side Three
1. And You And I
2. Heart Of The Sunrise
Side Four
1. The Revealing Science Of God
2. Leaves Of Green
Side Five
1. Ritual
Side Six
1. Roundabout
2. Starship Trooper
2018 marks half a century since the formation of YES and to celebrate this remarkable milestone YES will embark on a 13-date UK/European tour next March – #YES50. YES also headline their Cruise to the Edge from 3rd-8th February from Tampa and visiting Belize and Mexico. Only a few cabins remain.
Pre-Order links:
CD – https://www.amazon.co.uk/dp/B075XYP1HK
LP – https://www.amazon.co.uk/dp/B075XZ9MDM