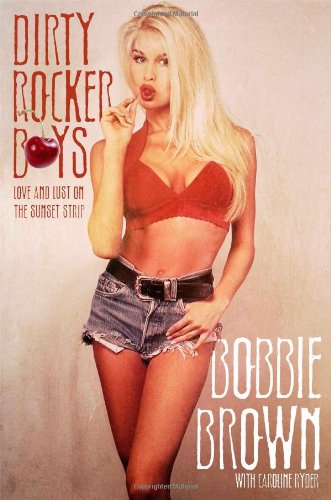 Think back to your bedroom as a teenager with posters ripped from the pages of Metal Edge Magazine fixed upon the walls.Â  Now imagine being engaged to the hottest guy in the picture. Former Cherry Pie Girl and current star of Fuse TVâ€™s â€œEx Wives of Rockâ€ Bobbie Brown doesnâ€™t need to imagine anything because she has lived it.Â  And trust me you want to read about it!

InÂ â€œDirty Rocker Boys, Love and Lust on the Sunset Stripâ€ Bobbie Brown, along with AuthorÂ Caroline Ryder, dish up a well written, cohesive, and rarely told female version of life inside the early 90â€™s â€œHair Metalâ€ explosion that was the Hollywood, CA Sunset Strip.

Bobbies journey from Louisiana Beauty Queen to quintessential Hollywood Video Vixen will leave you teary eyed and enthralled.Â  â€œDirty Rocker Boysâ€ of course has all the Sex, Drugs, and Rock and Roll youâ€™ve come to expect from a bio born of this era, but it also has the raw emotion and heartbreak you just donâ€™t get from the guys.

Prepare to be captivated by a cast of characters ranging from Jani Lane, Tommy Lee, and Dave Navarro to Leonardo Dicaprio, Kevin Costner, that one guy from Milli Vanilli, and everyone in between.

Even if youâ€™ve been a little more naughty than nice this year go ahead and add this book to the top of your Christmas list!Â  You wonâ€™t be disappointed.