A new rock biography about to be released is unlike any other. Michael Sweet, frontman of rock music’s notable Christian Metal band, Stryper, has his say. The appropriately titled Honestly is coming in May 2014. If youâ€™re wondering where all that black and yellow came from, itâ€™s in here.

Truthfully, as the advanced copy came to me I was at first reluctant, but mostly intrigued.The religious background of Stryper has always kept me away. Of course I am familiar with them. Is there a rock fan that isnâ€™t? Stryper was huge in the 80â€™s and into the 90â€™s. They are currently making a resurgence even now.

Back in the day, they could easily be found topping Billboard charts and in heavy MTV rotation, thanks to their many fans requesting videos on Dial MTV.  They were even the first band to have two videos in the top ten on that show.  The were big.  They just had a decidedly different message than most bands of the genre.  This was both a blessing as well as a curse for the band,as you would expect.

With Honestly, Sweet doesnâ€™t hold back his faith in the least.  Just as Stryper’s music is a vessel of Christian doctrine, so is the book, as is Michael Sweet to his very core.  I can respect anyones passion for what they believe in and this is his, so here we go.

On that note I have never read the words â€˜Godâ€™, â€˜Faithâ€™, or â€˜Jesusâ€™ so many times in my life.  Despite that though, I was still very in tune to the story of Sweetâ€™s life.  I loved the flow of the book itself.  It is very well written and a pleasure to read. You wonâ€™t get sidetracked or confused by any means.  The book is straightforward and complete.

Much of the tale is the same as any other Sunset-Strip-Era band trying to make it.  The same clubs.  The same bands in competition for record label attention.  The same give-it-your-all determination of young kids with a dream.

The similarities end there though.  What you wonâ€™t get is debauchery.  Definitely no hardcore partying or crazed groupie love fests.  Maybe itâ€™s a good thing or maybe not?  That would be up to the individual I suppose?  Sweet even goes as far as suggesting Motley Crueâ€™s â€˜The Dirtâ€™, if thatâ€™s what youâ€™re looking for.  The Dirt happens to be my favorite rock bio, so you can guess where I fall on that spectrum. But, Iâ€™m thinking that for the hard-core Stryper fan, Honestly is a welcome read.

The story itself is quite interesting and I was never once bored by it.  Accounts of random glass eyes ending up on stage really did have me laughing out loud.  The dedication of a band trying to make it and eventually succeeding will always hold my attention. And the intense pain of losing the love of your life to cancer is of course devastating.  There certainly is not a lack of emotional investment while reading this, no matter where you fall on the religious spectrum.

If youâ€™re a Stryper fan of course you must have this book.  If you err on the side of a bit more sin, you may enjoy it anyway.  Itâ€™s a story of humanity nonetheless and relatable on a rock as well as a human level.  The story is inspiring and honestly, (pun intended), the next time Stryper comes on the radio, Iâ€™ll leave it on.

Honestly: My Life and Stryper Revealed
By Michael Sweet of Stryper
Available at Amazon 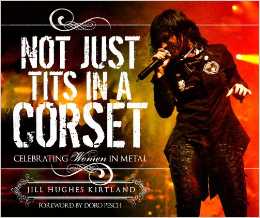