The Geordies are bracing themselves for the inaugural Hit The North festival on Friday 28th April.

For many years the North East of England has been lacking a multi-venue music festival that would rival the likes of the widely regarded Great Escape in Brighton or Live At Leeds showcases. This year that void has been filled with the arrival of the first ever Hit The North festival in Newcastle.

The inner city event is the brainchild of SSD concerts, who in recent times have hosted countless shows across the region. This includes the likes of the much-revered Live at Times Square outdoor concert series in Newcastle, which this summer will feature shows from chart-topping acts like The Libertines, Manic Street Preachers, Jake Bugg, Brian Wilson and James, to name but a few.

Inside of one day, Hit The North festival will occupy fifteen venues across Newcastle whilst playing host to in excess of eighty artists including the likes of Lethal Bizzle, Nothing But Thieves, The Hunna, Slaves, Frightened Rabbit and much more. These bands will play side by side to a strong contingent of local acts including among others The Pale White and Lisbon.

As a precursor to the main event, on Thursday 27th April, Newcastle’s biggest emerging music festival Meet The North will be showcasing the cream of region’s music scene across nine venues within the city.

As an added bonus, free entry will be granted to Meet The North for those who have an existing Hit The North festival ticket. Those lucky enough to be in attendance on Thursday will get to witness the likes of local lads Little Comets, Avalanche Party and Kobadelta along with a whole lot more. 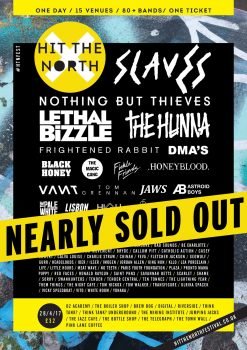