Woostah! The continuing story of the â€œYour Face Will Grow Back Tour 2015.â€

All right robots, letâ€™s get this going. The Palladium is a really cool old theater in downtown Worcester. Itâ€™s pretty huge and apparently haunted. This is what weâ€™ve been hearing from the security guys who work here. More on that later.

Iâ€™ll back up to about 1:30 pm. Upon finding the venue and getting parked, we set out to find some lunch while we wait for our turn to load our gear into the venue. Our choices were looking like Subway and Woosta Pizza since a lot of places were closed for the weekend. On the way to the pizza joint, we spot a little sign on the street advertising for shawarma. Guess what happened next? Iâ€™ll give you a hint. It rhymes with â€œWe made a bee-line for the shawarma place.â€ Take a minute and think about it, Iâ€™ll wait. Itâ€™s a bit of a brain teaser.

Yep! You were right! Shawarma it is. Iâ€™ll try and set this up so you can picture it: small storefront place; five tables; a cooler for drinks; kitchen behind the counter. The door was wide open, so we just walked in and started looking at the menu. And after a few seconds we realize nobody is around to welcome us. â€œHello?â€ Nothing. Scott grabs a can of Canada Dry and cracks it open. No response.

This is getting odd. Itâ€™s just three of us, standing in an empty restaurant with a TV on the wall playing Arabic music and showing a slideshow of people crying. Seriously. Every picture. Men, women, children, drawings, EVERYONE is someone crying. I canâ€™t lie, it was getting a little creepy. But at the same time, I was starting to think it was hilarious.

Just then the owner walked in behind us and welcomed us warmly. The mood got better immediately; this was a super cool guy. So we order our food and sit down to watch the parade of weepy faces for a while. Nothing gets your appetite going like watching a child cry his eyes out. Unless itâ€™s a grown man crying his eyes out. Mmmmâ€¦.. I can almost taste the baba ghanoush.

So at this point Iâ€™m giggling uncontrollably until our new buddy comes out with our plates. This was an amazing looking spread, considering the meager establishment we were in. I was starting to think that maybe we had stumbled onto a hidden gem. Then Mister Buddy friend offered to change the channel on his TV for us, and I KNEW we had. No more crying, now weâ€™re watching a selection of â€œsexy belly dancersâ€ on youtube.

Maybe we were putting off some kind of â€œtouring band of dudesâ€ vibe or something. Maybe old SeÃ±or Pals-a-Lot was just a pervert. Whatever the case, we spent the next 30 minutes or so watching belly dancers while we ate the best shawarma I think Iâ€™ve ever had. This is something that doesnâ€™t happen to me on a normal day; I should add.

Letâ€™s see… then what happened? We went back to the venue, loaded in,Â set up merch, all that crap. Then we hung out in our dressing room for a while and tried to relax a bit. You know, because being on the road rocking faces into piles of goo is super stressful. Hanging out in a big room with access to a shower and a case of iced down Narragansett helps that quite a bit, however. We found a way to struggle through it, so stop worrying your pretty little heads.

So, the show! Did you think I forgot? You silly people-shaped robots. Always second-guessing me. 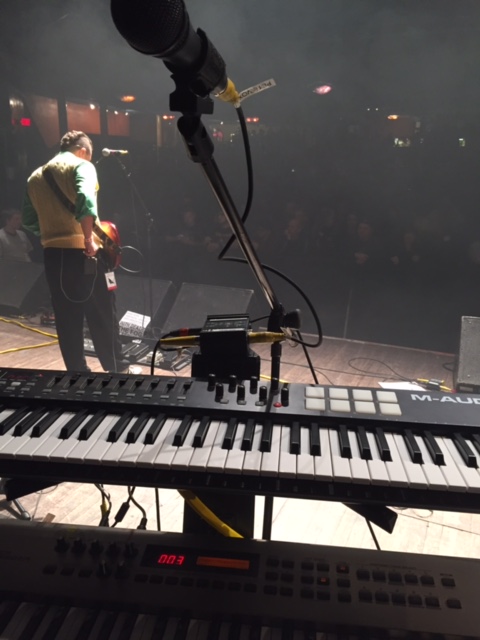 Right before the set 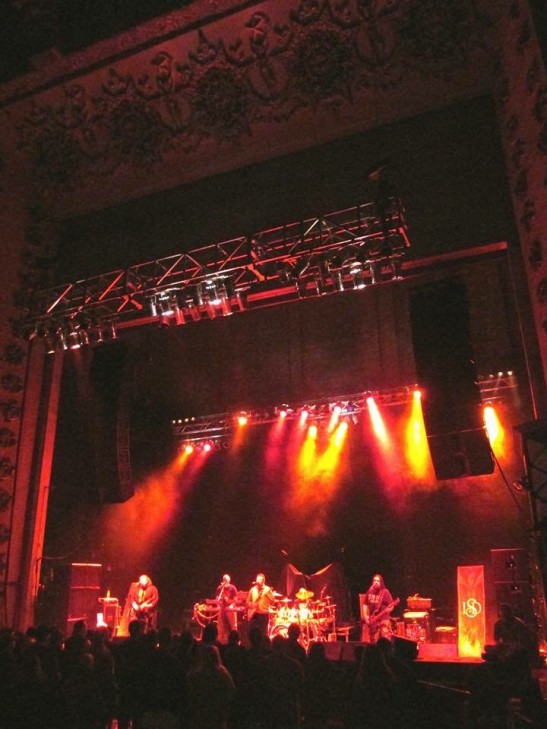 Imminent Sonic Destruction on stage at the Palladium

We had a great crowd, weâ€™re getting a good response, weâ€™re blasting through our songs, and suddenly the lights go out. We keep rolling like nothing happened, and it stays dark for about 20 seconds or so, which, of course, felt like 3.2 months. We found out later that the lighting guy didnâ€™t do anything and didn’t know how or why the stage lights went out and then came back on. And this is the part where everything comes full circle.

Remember the part way back in the beginning about this place being haunted? Thatâ€™s right, you guessed it. This had absolutely nothing to do with that. Ok, well, actually, according to the guys who work there, strange things happen to gear and stage equipment at this venue so often that a lot of bands refuse to play there. And there are several rooms downstairs that nobody wants to go in. We even asked to be taken down there to look around and try to punch some ghosts in the face, in the name of science, and these dudes had ZERO interest. ooOOOOOoooOOOOOoooooooâ€¦

Anywhuts, the show ended up being pretty great, and we once again had some crockpot goodness waiting for us in the RV. Lasagna soup. Thatâ€™s right. Weâ€™re not F-ing around anymore. I added WAY too much cayenne pepper to mine, so I had a dream that I scored a hat trick with the Red Wings, tipping in the last goal with the neck of a beer bottle. True story.

I should also add, there was some fun camaraderie with Next to None tonight, those are some good young dudes. Weâ€™ll see them again on a couple more shows along the way, so weâ€™re looking forward to that. Getting to know bands on the road is one of the best things about touring. That and the late night Go Fish tournaments where everyone is completely hammered. Thatâ€™s good stuff.

Welp, I’ll talk to you guys again after we find out what Poughkeepsie, New York has in store for us! Judging by recent events, it should be interesting at the very least.