Prophets and Outlaws skip the shootout at high noon to take a smooth ride into the sunset on V, their latest, easy-going EP.

The five-piece rock n’ soul band comes alive on this March release that marks a milestone of sorts as Prophets and Outlaws sound primed to burst onto the national scene. V marks their fifth release in as many years while sticking to their reliable formula of featuring five songs on each of their previous EPs.

With V, all the creativity pours toward the Texan’s unique brand of rock, which incorporates country, soul, and blues elements. These band’s frequent meanderings across the lone-star state saw them pick up an impressive win at 95.9 FM’s 2013 Ranch Factor Battle of the Bands. 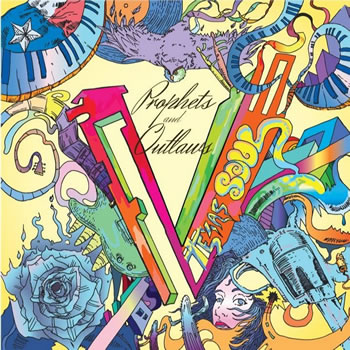 As for their latest release, Prophets and Outlaws will keep you company for 18+ minutes of pulsing, silky harmonies beginning with opening songs “Show Me” and “Lonely.” The country jam, “Party Like This,” follows with a riff-driven chorus that could be an anthem for the summer of 2016.

With the album at full stride, the band pulls up with their strongest song, the tender ballad “Outlaw Like Me.” An inviting rhythm section drives this one that could justifiably be played anywhere from a classy wedding to closing time at the local bar.

The final song, “We’re Gunna Make It,” seems like a stretch to reach fans of the pop-country sound to which the broader genre seems to be flexing. This is not a criticism of the actual song, but more of a statement to the strength and unity of the rest of the album.

The thing that sticks out about Prophets and Outlaws is the often overlooked harmonies. Lead vocalist Matt Boggs leads the charge behind a larger than life voice, but dont think his bandmates are dragging their feet. Stevie G, Jamie “Jelly” Ringholm, CJ Thompson, and James Guckenheimer provide great instrumentals along with those refreshing harmonies that’ll make you wince the next time you here an overproduced pop song with a room full of backing singers.

Major props are also due to whoever decided each member of the band deserves vocal credits on their releases. We hope to hear more from these country boys, but we’re not rushing them. We know they’ll take the slow, wandering route into Nashville to shake-up the scene and play some “Country Music Gold” (from 2015’s Texas Home).

V by Prophets and Outlaws is available on iTunes and Amazon.