Today, we hit the road heading for glory, riches and Hartford.

Welcome back, friends! As I write this, I’m sitting in our dressing room at the Webster Theater in Hartford, CT. So, I’m sure you’re asking yourself, “What led to this point?” What happened between our introduction to each other and Hartford?! I WANT DETAILS OR I’M KILLING THIS PUPPY!” Well, first of all, stop yelling at yourself. It’s unseemly. Second, I was about to tell you if you’d shut up for a second. Sorry about that. I didn’t mean it. You’re entitled to a couple of questions.

Yesterday was officially day one of the tour. The day we met to pack up the trailer and load our shit into the RV, which will be our home for the next two weeks. We also played a little catch and generally enjoyed the pre-tour feeling. Our goal for the day was to get as far as Scranton PA. Ah, Scranton. The good times of years past. The memories come flooding in so thick you almost have to brush them away from your face like a f&$%ing idiot. I’m kidding. Actually, we’ve never been there before. We just knew it had a Wal-Mart and a Pilot truck stop. But I’m sure it’s lovely. Especially if you like cities that start with “S.”

The drive was fairly uneventful, unless you consider drinking, laughing and repairing broken steps eventful. Before anyone starts puffing up with indignation, NO, the driver was never included in these things. So… un-puff. There you go, isn’t that better? The step was probably the most interesting thing yesterday. This blog is starting to make me bored, and I’m writing it. Wow, I’d better step it up. See what I did there? Let’s try and keep up, shall we? You can do it. I have faith in you, even if you are most likely a bunch of robots.

There’s a power step that goes in and out when the RV door is opened or closed. Almost immediately, we were hit with a dilemma. The thing stopped working and was just hanging out, enjoying the breeze and threatening to decapitate any squirrels who were too close to the road. Luckily, we always carry a Bryan with us on tour. He can build or repair just about anything, he has the ultimate set of tools (his dad is a television repairman), and I think he plays bass or something too. I don’t know; I don’t pay that much attention to things that aren’t HEY! What was that!? … sorry, something shiny went by the window. Anyway, here’s Bryan at work! 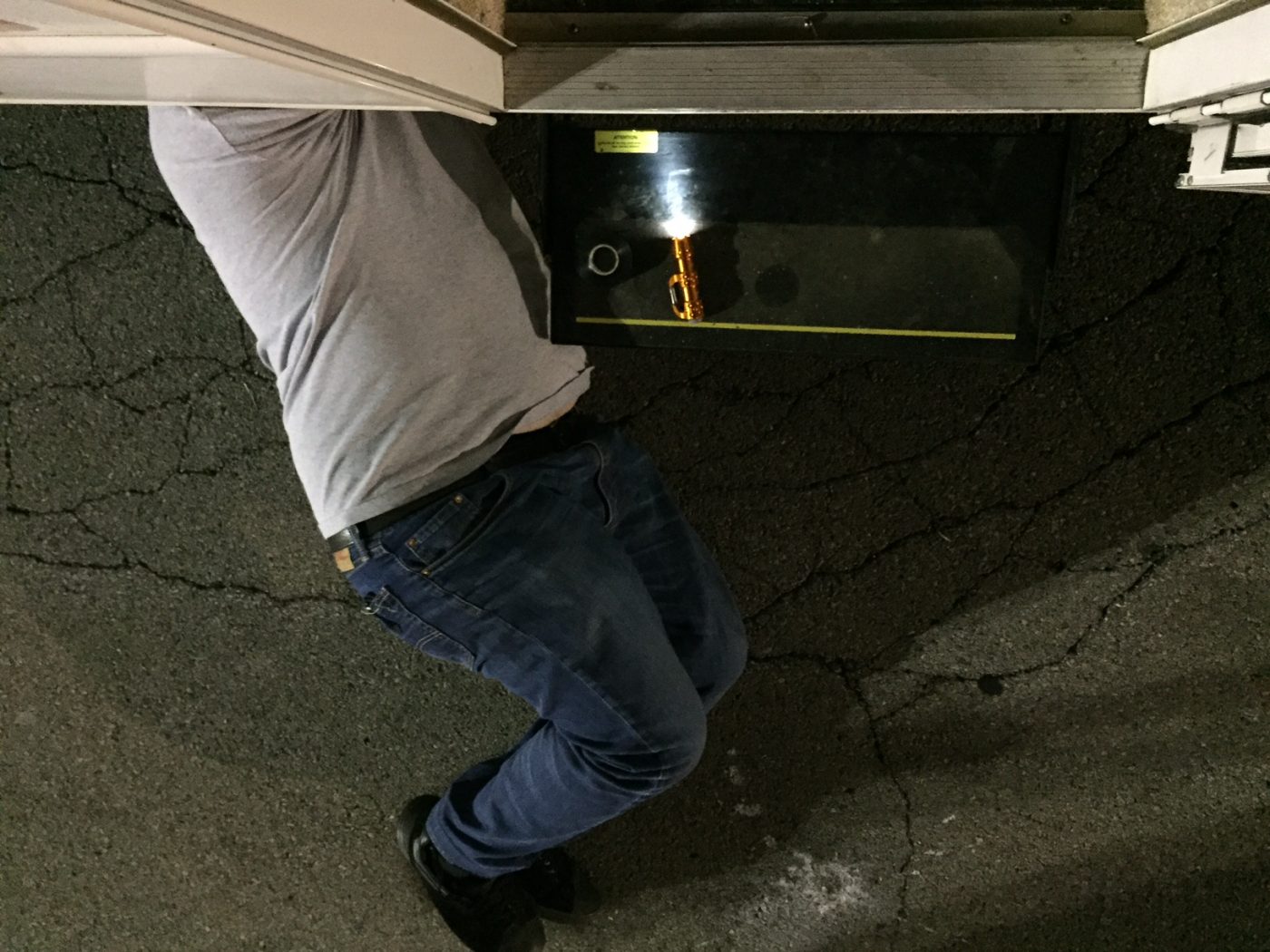 Long story short, the step was fixed, and on we drove into the night, like a bunch of night-dwelling, nocturnal… night people. In a big camper. At night. Last night. The rest is kind of a blur. There was napping, some viewing of funny videos, a few more drinks, the usual. Getting ready for meeting up with Fates Warning and getting this adventure started! Which will happen very soon, as a matter of fact.

Tomorrow’s post will be about our first show of the tour, so I hope your appetite is sufficiently whetted. Trust me, that’s not as dirty as it sounds. In a few hours it’ll be “HELLO HARTFORD!” and then it’s off to the races, Progressive Super Metal style. Don’t say you haven’t been warned.