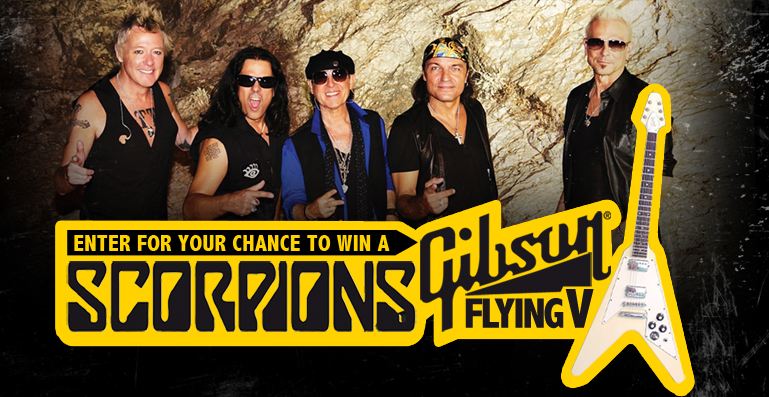 Legendary German hard rockers SCORPIONS are celebrating the recent release of their MTV Unplugged performance on CD & DVD, and part of that celebration is a contest in which one lucky winner will walk away with a Gibson Flying V guitar autographed by the band themselves!

Check out their video for “Rock You Like A Hurricane” here!

Material from MTV UNPLUGGED is taken from SCORPIONS’ first-ever “MTV Unplugged” show and features new acoustic versions of their best-loved classic hits, as well as five brand new songs. MTV UNPLUGGED will be available in North America as a deluxe CD + DVD package and as a Blu-Ray, and is being released in 50 countries, a testament to the German band’s iconic status worldwide.

MTV UNPLUGGED has been receiving rave reviews from both fans and media alike with Classic Rock Revisited declaring “After their fans get a hold of the new DVD/CD MTV UNPLUGGED, the demand for SCORPIONS to remain on their Farewell Tour may keep the band on the road for twenty more years!”, and Blog Critics advising “Sit back, grab a glass of something and relax as SCORPIONS remind us all just what a brilliant bunch of songwriters and rockers they are…”

Recorded and filmed on September 11th and September 12th of last year, SCORPIONS’ MTV UNPLUGGED was culled from two dynamic acoustic sets at the Lycabettus Theatre in Athens, Greece. The spectacular open-air theatre, situated 300 meters above the city, was an impressive backdrop for the first-ever open-air show in the history of “MTV Unplugged” (the theatre also shares a birth year with SCORPIONS themselves, having been built in 1965.). In other news, SCORPIONS are still in the midst of their epic Farewell World Tour; the tour has been going on for more than three years now. To the delight of their fans there is no end in sight, as to date the band has only played 23 out of the 38 countries planned on the itinerary.