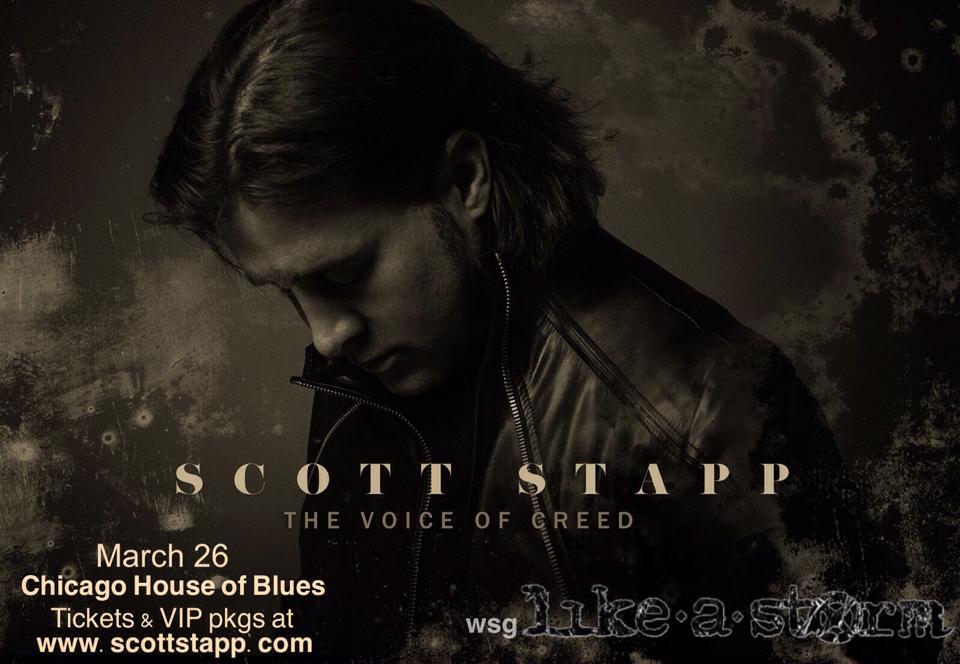 Enter to win a prize package! See bottom of article for contest details.

Proof of Life, with its broad appeal and fresh sound, has been warmly received by new fans, and is turning the heads of critics. Stappâ€™s career, once shaken by both professional and personal strife, is back on the fast track, and the album is even catching the attention of those who previously disregarded Stapp. The honesty with which he reveals his struggles, and his message of hope, perseverance and absolution are striking a chord with listeners.

Longtime fans will find everything they love in this record, such as poignant lyrics and soaring choruses that are delivered by Stappâ€™s passionate and soulful voice. Yet, there is also a new and engaging vocal style laced throughout the mix of adult contemporary and modern rock tracks. There is truly something for everyone on this record.

Grammy-award winner, Scott Stapp, the voice of Creed, hits the road on March 19 in support of his latest solo release, Proof of Life. Released Nov 5, 2013, Proof of LifeÂ debuted on three of Billboardâ€™s charts, including #7 on the Rock Chart, #3 on the Current Contemporary Christian chart and #35 on the Current Album Chart. It then went on to produce a #1 single, Slow Suicide, on Billboardâ€™s Christian Rock Indicator chart. The emotionally charged album received an enthusiastic welcome from devoted Stapp fans, who have eagerly awaited new solo material since 2005â€™s platinum-certified The Great Divide.

The Proof of Life Tour kicks off in Dallas, TX at the House of Blues on March 19, and includes thirteen North American stops before heading to Europe. The tour stops off in Chicago onÂ Wednesday, March 26, at the iconic House of Blues.

The wildly popular band Like a Storm joins Stapp in Chicago and continues with him for five more dates. Hailing from New Zealand, this fan-friendly band has developed an adoring fan base while aggressively touring the States, both as support for A-list bands, as well as on their own headlining tours. This is the perfect time for Chicagoans to catch Like a Storm, whose current single has spent months on the BigUns Top 15 Countdown on Sirius XM Radio’s Octane channel, including two weeks at #1.

This is a jam-packed lineup full of artists that are all well-known for their captivating and energetic performances. Established fans and new listeners are sure to find something they love in this show. Tickets, including VIP meet and greet packages with Scott Stapp, are available at www.ScottStapp.com.

Enter to win a prize package!
Grand prize: Two tickets to the show at Chicago House of Blues on March 26, including Meet and Greet with Scott Stapp, along with a signed Proof of Life CD and Photo
2nd prize: Like a Storm merchandise package

Entries end at Midnight EST on Friday March 21st!
Winners chosen at random.
Winner will be notified by Sunday night March 23rd by 6pm EST
You must bring proof of ID with you to the venue.

Disclaimer: Scott Stapp Street Team is a group of action-based fans currently supporting the Proof of Life Tour. This group is not officially connected to Scott Stapp or his affiliates.