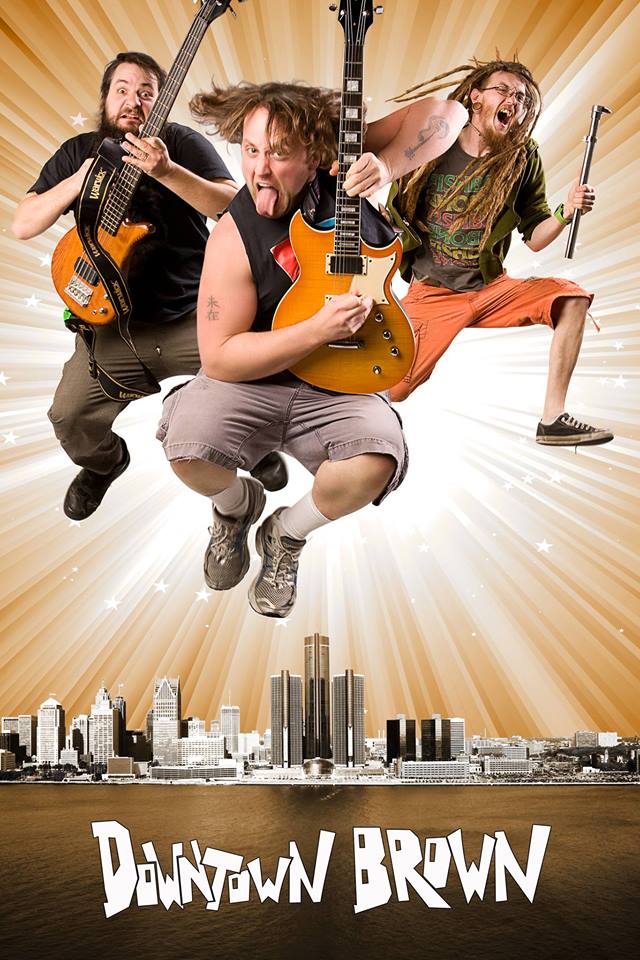 Downtown Brown (DTB) is a unique band with an ever-changing sound. They fuse metal, funk, rock, jazz and punk to create their own musical hybrid.

Neil Patterson (singer, guitar), AKA Neebo, started the band in 2001 although he says that DTB was a continuation of a vision that began back in 1996, while he was still in high school. Neebo is the singer/songwriter and main driving force behind the band although the other band members have always had creative input. He is also the only constant member to have remained since the bandâ€™s conception.

In 2001, DTB released a collection of their first demos, Dinosaurs with Lazers, on Back Alley Music. In 2002, they followed this up with their debut album, Moist and Ridiculous, on Detroit-based indie label Static Records. The band released their next four releases, Downtown Brown (2004), Liveâ€¦ and Sweaty (2005), I Love Burgers (2007) and Back from the Dead (2009) on their own label, Chocolate Stain Records.

DTB adopted a relentless touring schedule early on, firmly establishing themselves first in the Midwest and then throughout the entire US. They were personally invited by Warped Tour founder Kevin Lyman to play multiple dates on both the â€™06 and â€™07 tours. Their diverse style of music has given them the opportunity to share the stage with numerous diverse acts, such as Fishbone, Mustard Plug, Me First and the Gimme Gimmes, Dee Snider, Slightly Stoopid, Andrew W.K., The Aquabats, Insane Clown Posse, The Presidents of the U.S.A., and Wesley Willis.

In 2010, DTB caught the ear of DC-Jam Records president Darron Hemann who promptly signed them to his label. Their debut for DC-Jam, Grabbletonâ€™s Beach (2010), was mastered by Derek Oâ€™Brien (who played in Social Distortion, Agent Orange, and the Adolescents). This was their first fully promoted international release and the band spent the following year touring non-stop to promote it.

In 2011, DTB released the 10th Anniversary â€˜Greatest Hitsâ€™ Collection: 2001-2011 through DC-Jam. The album features 20 songs showcasing material from the bandâ€™s independent releases over the last decade.

Although DTB had a revolving door of musicians throughout their first decade, Neebo has since solidified a solid unit of musicians. DTB is rounded out with Ron (bass, vocals), who joined in 2008, and Bobbinz (drums), who joined in 2011. This creative force works very well together and DTB turned into a collaborative unit with Neebo, Ron, and Bobbinz sharing the song writing, music writing and overall â€˜crazy anticsâ€™ of the band!

In 2012, John Norwood Fisher (bass player and founding member of Fishbone) signed on as the bandâ€™s manager. DTB were ready to go into the studio to record their next album however didnâ€™t have the funds to get out to Los Angeles, California to do it. In 2013, they put together an Indiegogo campaign to try and raise the funds and were able to raise just under $12,000 through this campaign!

DTB travelled to Fuller Sound, in Los Angeles, to work on their next record, Masterz of the Universe. The album was engineered by Adam Fuller, produced by Norwood Fisher, mastered by Derek Oâ€™Brien, and mixed by Ryan Hyland (Plymouth Rock Productions, Plymouth, MI). DC-Jam released Masterz of the Universe in November of 2013 and the band has been on the road, ever since, promoting it.

Playing live, DTB is a force to be reckoned with! They are an incredible live band with high energy, off-the-wall, in-your-face, crazy antics. Not only are they fantastic musicians who play great music but they are extremely comedic, in nature, and add a tongue-in-cheek sense of humor to their live show. I would put their live performance in the same category of bands like the Meatmen, GWAR, Mr. Bungle, Tenacious D, Guttermouth, and NOFX. Along with these bands, I would also put DTB in the same category, musically, as such bands as Fishbone (duh!?!), Infectious Grooves, Red Hot Chili Peppers, 311, Primus, Mind Funk, Jimmieâ€™s Chicken Shack, and 24-7 Spyz. DTB do not fall into any specific musical category but have similarities to all of these listed bands.

DTB just finished a week out on the road supporting Chuck Mosley. The tour ended at the I-Rock in Detroit, MI on March 15th, 2014. I was on hand to catch their act. Here are the images from that night.