September Mourning, of the project by the same name, gave National Rock Review’s Erich Morse a peek into her mutli-verse and why heels are sinister.

September is working with iconic comic book artist Marc Silvestri, who started out on the original X-Men comics and went on to form Top Cow Productions (Witchblade, The Darkness). Together, they are putting together the story of September Mourning in graphic form, to accompany, and enhance the rest of the transmedia package. She already has an impressive pedigree by touring with Marilyn Manson. And, she has quickly built up a loyal fan base, which she calls her â€œChildren of Fate.â€ The new album is twelve songs, and described as an epic tale of â€œheartbreak, loss, pain, joy, love, redemption, but most of all, courage.â€

Early media releases talk about the new album in this manner. “September Mourning carries positive passions into its music, which is often operatic, but also completely rock â€˜nâ€™ roll in all its majestic glory. The album is full of themes that run the gamut, from â€œSkin and Bones,â€ which takes on people who would judge you on appearances, and â€œChariot,â€ about those who allow themselves to be consumed by somebody else, to â€œPaper Dolls,â€ lambasting a guy â€œwho rips peopleâ€™s hearts out without regretâ€ and â€œBefore The Fall,â€ a song that accentuates our common humanity. â€œWhen we bleed/We bleed the same,â€ sings September. September describes â€œChildren of Fateâ€ as a â€œcall to arms for her fans, our families,â€ which she turned into a 6/8 waltz, “but heavy, eerie and strange, to give it this weird feeling”.

And now, without further delay, we present to you the interview in its entirety. Enjoy, oh… and comment below if you feel so inclined.

NRR: Thank you, September, for taking some time to talk to National Rock Review today. I’ve seen a few write ups of how the band, September Mourning, came to be. Since I have you for a few minutes, can you tell me in your own words how it all went down?
September: Thank you! If you are familiar with our interviews you probably have noticed that when discussing September Mourning, I refer to it not as a band but as a project. This is because SM started as a story before it branched into the musical realm. In short, I, September Mourning am a human-reaper hybrid, who feels the need to give some human souls a second chance at life, and thus toys with Fate.
NRR: I’ve seen the term transmedia a few times where you’re being discussed. In a overly simplistic way, is it basically like your favorite super hero/villain is in different titles of comic books but each appearance furthers the plot that much more down the narrative?
September: Basically. Because we started this from a storyline, each member is a character in the story… five Reapers: Riven, Wraith, Shadou, Stitch, Rasper and myself, September. The comic books tell the stories and the concerts are a musical artistic adaption of them. Both further the narrative, but can stand alone separately. If you like the music but don’t care for comics it all still makes sense and vice versa.
NRR: I’ve seen where you’ve been described as the Lady GaGa of metal/alt rock because of the theatrical aspect of your image and shows, is that a fair comparison or do you feel it’s completely off the mark?
September: Although I personally hate being compared to other artists, I am honored by this one as I do respect her for being a visionary in her genre and being brave enough not to follow the pack.
NRR: I saw that you were signed to a major label, Virgin Records, not too long ago and were in the studio working on your initial release. Any tantalizing tidbits you’d care to share about the progress of that LP?
September: It’s finished! I can’t wait to share it, September Mourning. with all of our Children of Fate who have been patiently waiting for new music. I was in the studio with Howard Benson working on it last year…. Howard brought in these toy dragons that he had bought his kids when they were younger and had them all over the studio. He let me keep a few…. I love dragons.
NRR: With some of the instability on a permanent line-up for the band, have you found your way of writing has changed or do you still go about it roughly that same way? And what is it if you would?
September: No not at all… still the same… I come up with a lyrical idea and/or a hook of some kind first usually and then build off the musical arrangements. Sometimes it works the opposite way, but more often than not it starts with that hook.
NRR: You may not have gotten into the extensive touring at this part of the band’s growth where a Slayer like band has been touring extensively for many years, but in the time you’ve been doing shows and recording music, have you had a Spinal Tap moment yet that makes you laugh just thinking about it? If so, care to share it?
September: Eh, maybe not so much Spinal Tap as just plain embarrassing… I remember in one of our earlier tours, I jumped off stage and onto a barricade in heels and twisted my ankle real good. It swelled up like a watermelon… but we still had another week of touring [to go]. The next night rolls around and I brilliantly decide to take like 9,385,927,527,352 Advil to stop the pain and be okay to perform. All this on a pretty empty stomach. That show ended with me rushing off stage after the set and puking my guts out for like 15 minutes in a trash can near the headliners dressing room with them all staring at me the whole time and going, “Now that’s fucking metal, maaaaaaan!” *horns up*
NRR: You seem very comfortable in front of the camera, especially when doing a shoot for the band with all of your different looks. Is this something you have fun with or do you see it as just another part of the responsibilities you have of being the focal point of September Mourning? 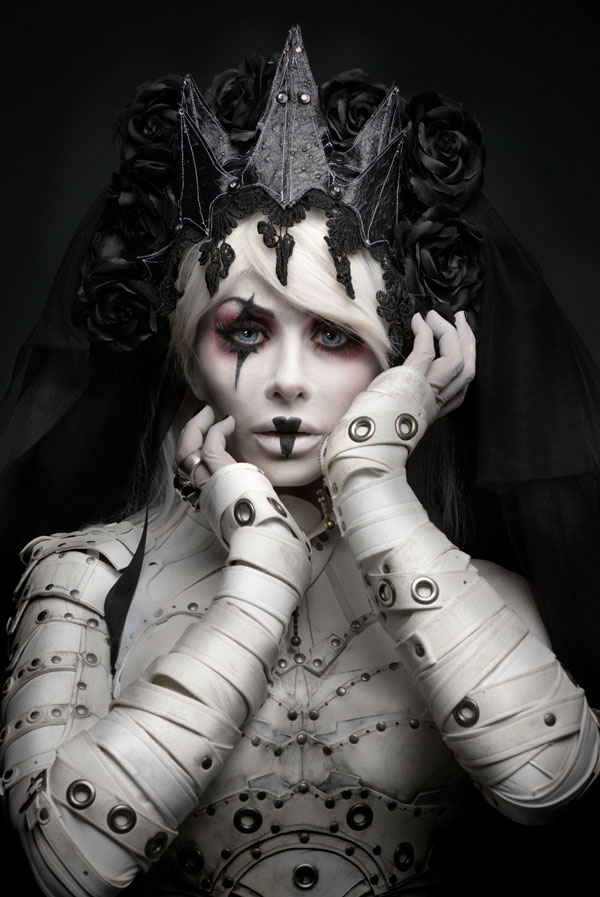 September: It’s all part of the project… I like to think of this as an art project with a very visual dynamic, and it’s my responsibility to uphold that. I’ve modeled for years… it’s just another way of performing for me.
NRR: Tell me, how would you describe your sound to someone that has never come across it on their own before?
September: A mix of Paramore, Motionless in White, Lady Gaga and My Chemical Romance…. eclectic alternative rock with a hard dark edge.
NRR: When you have an off day where you truly don’t need to do anything music related, what do you do to decompress or recharge yourself for say the next show?
September: Netflix, movies, or books… anything that can bring me into another world.
NRR: If, for whatever reason, you stopped the industry grind, what would your “normal” job be do you think?

â€œFor me, the project is a story, a theatrical art piece,â€ September explains. â€œMusic is the backbone, but for this to work, it has to include the imagery and the narrative all symbiotically linked into the whole. Music taps into your innermost being. Thereâ€™s something very intimate and personal about it.â€

September: I’ve always believed you should do music and art because without it you’d die. Music and Art are the air in my lungs… On that note, I’ve never been normal. In a parallel universe, maybe I’m a spy… got my wigs and crazy disguises… taking down the bad guys with red lipstick and Muay Thai punches.
NRR: What do you see as being more gratifying, being used as an inspiration by a fan or seeing and/or hearing about what a fan did and actually being inspired by them?
September: Both… inspiring a fan to do something great, which in turn, inspires me even more.
NRR: Last one, and I’ll turn this one over to you. Is there anything I missed or you’d like to talk about or just put something out there for the fans?
September: To all of our Children of Fate… thank you for accepting us and our story into your lives, our music into your hearts… for daring to be an individual, facing your fears, conquering your doubts, being proud of who and what you are… we love you all.