Napalm Death is set to release a new album January 27, 2015, entitled Apex Predator – Easy Meat. After returning from the 70,000 Tons of Metal cruise January 22-26, 2015, the band will also start the Through Space and Grind Tour 2015 with Voivod, Exhumed, Iron Reagan, Black Crown Initiate, and special guests (on select dates) Ringworm, Dayglo Abortions, Theories, and Phobia. The first stop on the tour will be in Miami, at Grand Central to coincide with the album drop. 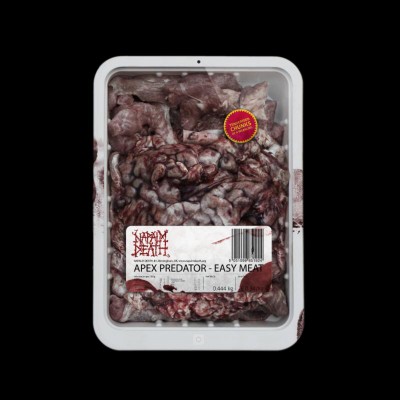 “If there is something where human beings are treated with indignity, if there is kind of restrictions on them, it just bothers me. And I just felt a need to put it out there.” ~ Mark “Barney” Greenway

NRR: With the tour that’s getting ready to start, are you excited for it or are you going to wait until it gets a little bit closer to the end of Jan?
Greenway: I’m excited because of Voivod. When they first come out, certainly, the were hated, especially in the UK by the press. They [the press] sort of came around. But they never understood [Voivod] really are a very shrouded band, I think. Killing Technology, their third album, I mean that album was, is immense. That’s definitely my favorite album, it’s f**king incredible.
NRR: With the long, storied history of Napalm Death is there one album just kind of looking back that you like more then another or are they all like your children and and it’s really hard to pick your favorite one?
Greenway: I mean Harmony Corruption is a good album. I think Enemy of the Music Business, I just think that is a pivotal point for us. We had a few years of really quite, quite deep experimentation. Enemy of the Music Business was kind of the kick in the pants. I think it was just really kind of, it kinda of ripped people’s faces off, you know, sonically. And the new one of course. I think the new one is exciting. It’s pretty strong beginning to end.
NRR: If you don’t mind a little more of a technical question, how long did it take you guys to go from writing the album to recording it to getting it ready drop?
Greenway: Oh, it took a year but that was a year with after intervals. It was basically going in for a couple of days, recording some stuff, coming out, going home, and carrying on writing. And the reason we did it was because we wanted a variance in the production. I think one thing that kind of let’s music down at times is the kind of, this habit of setting a disk on one particular setting and then just recording the whole thing through it.