Very few albums deliver the punch like this one. In fact, for Sevendust, this release is Mike Tyson in his prime and angry. 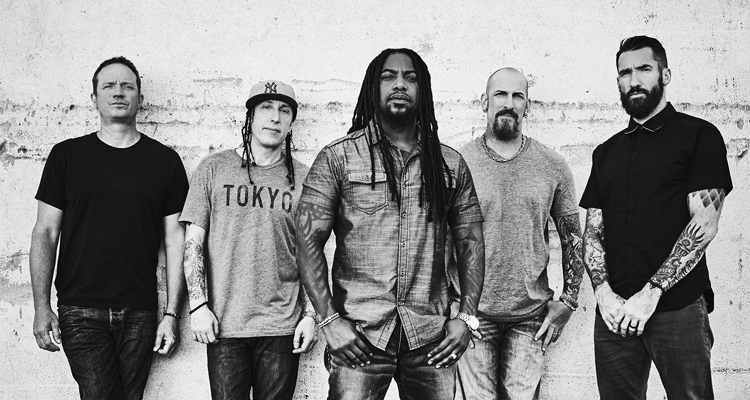 For those who may have been in a coma for the past decade or two, let us refresh your memory of a significant player in the world of rock and metal. Lajon Witherspoon (vocals), Clint Lowery (guitar), Morgan Rose (drums), John Connolly (guitar), and Vince Hornsby (bass) are the traveling band of merry musicians known as Sevendust. Kill The Flaw is the new album from the group and was released today on 7Bros. Records. The fellas are currently on tour in support of the new release with Godsmack since Sep 23, 2015.

Sevendust is on tour as direct support for the Godsmack. The tour kicked off on Sep 23 in Detroit and runs until Oct 19, where it wraps in Ottawa, Ontario. The tour will be making stops in Kansas City, Huntsville, and Poughkeepsie to name a few. The guys made an appearance at the Food Truck & Rock Carnival on Sep 19 in Clark, New Jersey; the Louder Than Life festival in Louisville, Kentucky; and the Monster Energy Aftershock Festival in Elverta, California. They also played with Breaking Benjamin on Sep 18 in Pennsylvania. 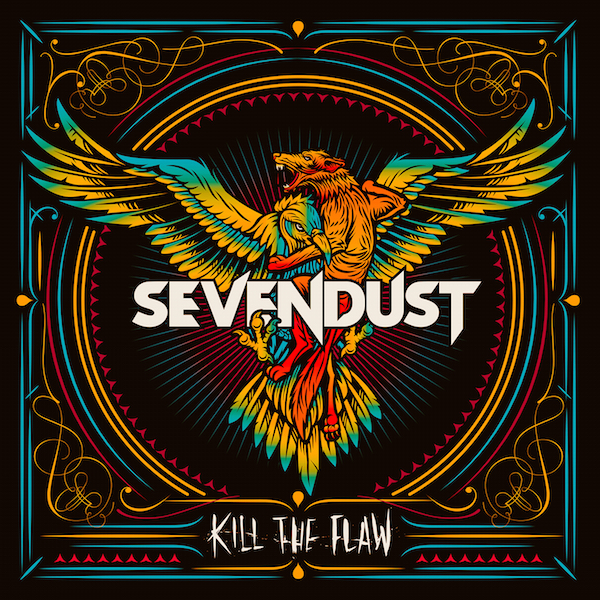 With the tour going well at this point, we’ll shift the attention back to the album. It was self-produced by Sevendust and recorded at Architekt Music in Butler, New Jersey with engineer/mixer Mike Ferretti. ADA/Warner Brothers Distribution is handling the logistics of the release by all accounts. As the track listing above shows, the new CD has eleven tracks and comes in at about forty-seven minutes long of well written material.

“We took some time off from the heavy side of Sevendust and when it came time to record some new music; Clint, John, Vinnie, Morgan and I put everything we had in to what became Kill The Flaw. We love this new music and we cant wait to share it with our amazing Sevendust family! God bless yall!” ~ Lajon Witherspoon

The band released a live stream of the album a week early. Not only does the stream encourage fans to buy the album, according to a post on their Facebook page, “… this lets us get ahead of the inevitable/impending leak which isn’t fun for anyone.” While we don’t agree with leaking artist material early, with this record, it is understandable with fans wanting to obtain it as soon as possible.

The first track on the release is “Thank You.” With the drop starting off the song, we can already imagine how the set starts off with this one live without regard, sprinting right out of the green room onto the stage. Lajon’s vocals go from clean to almost dirty and come back from the chasm without missing a beat. Morgan’s beat selection is mesmerizing on this. How he can keep the beat with the samples and the change in tempos is nothing short of wicked. Clint, John, and Vince are able to bring back the harder side of the axe brigade without degrading the sound or over playing Lajon and Morgan. It’s no surprise why this one is the first to hit airwaves.

With the title track, “Kill The Flaw,” we see the maturation of the talent that has captivated fans since 1994. It is classic Sevendust, but Sevendust that just get’s it. The way the song is put together showcases all of the facets of the group. The writing, the vocals, and the instrumentals all go hand in hand on the album though more evidently on this cut. It also must be said that the comfort the guys have for one another can be heard in a song like this. Everyone plays off of each other and it shows. It is an excellent addition to the catalog, period.

We at National Rock Review could wax poetic on all of the songs on this record, but that would take away from the experience of hearing for yourself first. Fans, you will have a new favorite, even more than a certain acoustic album, to listen to for quite a while. And, we warn the non-diehard fans as well; you will have loved ones asking what you’re listening to because you’ve been listening to the same thing for days now.

Get it, listen to it, repeat. That simple. And let us know your thoughts on what you hear on this or from seeing the guys live. Enjoy it, we certainly did and will for a good while.