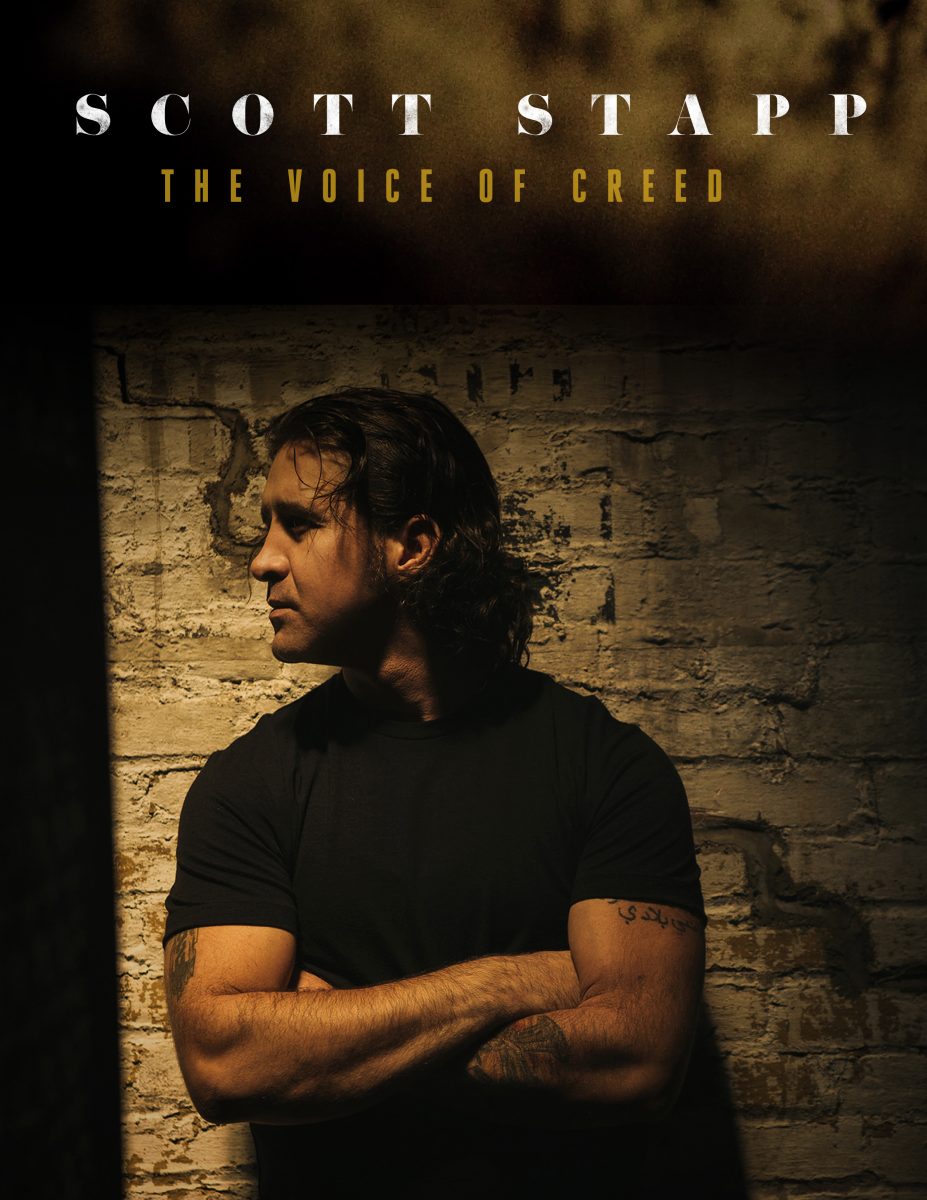 With Proof Of Life, Grammy-Award winning artist Scott Stapp has proven that he is undeniably among the great rockers. Â Although, Stapp’s previous solo effort, The Great Divide, seemed to lack direction, Proof Of Life is proof that this time Stapp got it right. Â

Stapp is preparing to hit the road on his Proof Of Life tour and plans on spending the bulk of 2014 playing across the globe. I recently had a chance to speak with Stapp about the upcoming tour and his stop at the Machine Shop in Flint, Michigan.

EH: Back in January, I wrote the review of Proof of Life for National Rock Review. Iâ€™d like to ask you some questions about the upcoming tour in support of that album?

SS: Yeah man, we appreciate that. It was a good review. It was well thought out and I liked your comments.

EH: Thanks. Itâ€™s nice to hear when an artist reads a review I wrote on them. When does the tour actually start?

SS: The tour starts on March 19th in Dallas, Texas. We are going for three weeks and then in April headed over to Europe then back to the States. In May and June through the summer going between United States and Canada and then dipping even into South America.

EH: Is this tour going to be taking you to any places that you havenâ€™t been to before?

EH: How about the March 29th date at the Machine Shop? Is this your first time coming to Flint, Michigan?

SS: I think (Flint) itâ€™s my first time since back in the late 90â€™s and itâ€™s my first time at the Machine Shop. Iâ€™m excited to play there and I love my fans in Flint and in the greater Detroit area. Theyâ€™ve been there with me since day one man and itâ€™s cool to have an up close and personal, sweaty rock â€˜n roll show, there at the Machine Shop.

EH: Yeah, I know Iâ€™m definitely looking forward to it. Other than the first single that came off it, do you have any other singles planned to be released from the album?

SS: Yeah, we do. Thereâ€™s quite a few. We are talking right now about whether we should take Proof Of LifeÂ to Rock Radio. We just released Only OneÂ to another AC (adult contemporary) format station. Â Dying To LiveÂ is getting ready to be released to another AC station and then, as mentioned,Â Proof Of Life, New Day, and evenÂ Who I AmÂ have been talked about being released as singles to Rock Radio.

EH: Do you have your own specific favorite song on the album?

EH: How about the sales of Proof Of Life. Have you been happy with the sales so far?

SS: You know, I have, I have man. Itâ€™s been very well received. Itâ€™s really catching fire like word-of-mouth. That makes you feel good as an artist when people are getting the record and they’re really loving the entire record and they’re telling their friends about it. So, thatâ€™s always cool and we just hope that Rock Radio will come on board even more than they already have.

EH: One thing that I was really impressed with was your song, Hit Me More. That song showed me, and everybody that I introduced it to, a completely different side of you when it comes to your singing, your vocal ability. I really think you did something different. You really stretched into new territory on that and kind of gave it a rockabilly flare to it.

SS: Thanks man. You know, I think that was exciting for me with this particular record because I really felt no boundaries. One of the benefits of making a solo album is you donâ€™t have to compromise sometimes because of the musical tastes of your band members. That, of course, was an amazing collaboration and chemistry within Creed but sometimes things got morphed from how they originally came out. Â It felt good for me to kind of go and allow it be what it was and not have to make any adjustments to it. That song shows some of my roots and inspirations. When it came out, I remember being really excited about it and I was excited to share it with my fans.

EH: The recording process. Did it differ a lot from when you recorded with Creed?

SS: Yeah. Not having other personalities that you have to worry about you know? Â Having conversations, and kind of making compromises, and that stress of â€˜thatâ€™ which is healthy and good for a band but still when youâ€™re doing a solo record itâ€™s all your vision. I surrounded myself with guys that were just there to help me fulfill my vision. So, the work was the same but It just flowed a lot more because I didnâ€™t have to go back and do things differently or go back â€˜n forth.

SS: No. Not right now. The guys Iâ€™m taking out with the band are equally as talented. Iâ€™ve got Chad Szeliga, from Breaking Benjamin, on drums, a phenomenal drummer. Iâ€™ve got Andy Wood, just an amazingly talented shredder guitar player, with a great sense of rhythm as well, on lead. And, Travis Comer, another lead guy but heâ€™ll be doing rhythm and back-up vocals. Then, Andy Waldeck on bass, whose played with Alice In Chains, Stone Temple Pilots, and most recently Daughtry. He and I have been writing songs and jamming together since â€™09. Â Iâ€™m pretty excited about the band that I have. They are all phenomenal musicians and phenomenal live musicians. Itâ€™s going to be exciting to play these songs on this record live and I feel that itâ€™s really going to be an experience.

EH: It sounds like you have a stellar all-star line-up.

SS: Yeah. Most definitely. It was important for me. I had Josh Freese and Kenny Aronoff on drums, in the studio. I had Phil X and Tim Pierce on lead guitar, in the studio. These are the best of the best so I needed to find a band like that to be able just to do what we did and pull it off.

SS: Ha, ha, yeah I did with a particular song,Â Break Out. My son, Jagger, actually began writing that song about four years ago. I caught him in his bathroom with a little mini-cassette recorder singing that chorus melody, those words, the first two lines of the chorus as it is right now. You know, heâ€™s a teenager and Iâ€™m sure he was kind of singing that in kind of a youthful angst and rebellion towards me, you know, whichever way a 13 or 14 year old boy starts to feel. But, I really connected with it. It really brought us together as father and son in terms of being able to write a song together. Heâ€™s a drummer. He writes songs but when he plays in a band he wants to just play drums. It was awesome. He inspired With Arms Wide OpenÂ and then 15 years later heâ€™s collaborating on a song with me that made my record. I would have never ever thought that would happen.

EH: On the tour itself, do you have any specific opening bands that you are taking on tour with you or is it pretty much a different band in each market?

EH: A friend of mine, a few years ago, went through some really hard times. He really related to the song OvercomeÂ and wanted me to ask you what your inspiration was for that?

SS: I was at a time in my life where I was still periodically struggling with some demons. I would take like two steps forward then three steps backwards and then four steps forward and five steps backwards. I was going through a tough time and I would start to get out but then Iâ€™d go backwards. It was really just a song about trying to reclaim my life and trying to just say, you know what, I can overcome. You know no matter how many times Iâ€™ve fallen, no matter how many bad days there are, Iâ€™m still gonna keep moving forward and overcome this. Iâ€™m not gonna give up. That was really the vibe and the mood that was inspiring that, just trying to overcome some things in my life that were very hard and tough times.

EH: Thank you for taking the time to talk to me about your upcoming tour and for giving us the opportunity to see you at the Machine Shop.

SS: No problem man. Every time we speak to you is a pleasure. I look forward to seeing you at the show.

EH: I will definitely be there on the 29th.

SS: Awesome brother. I look forward to it. 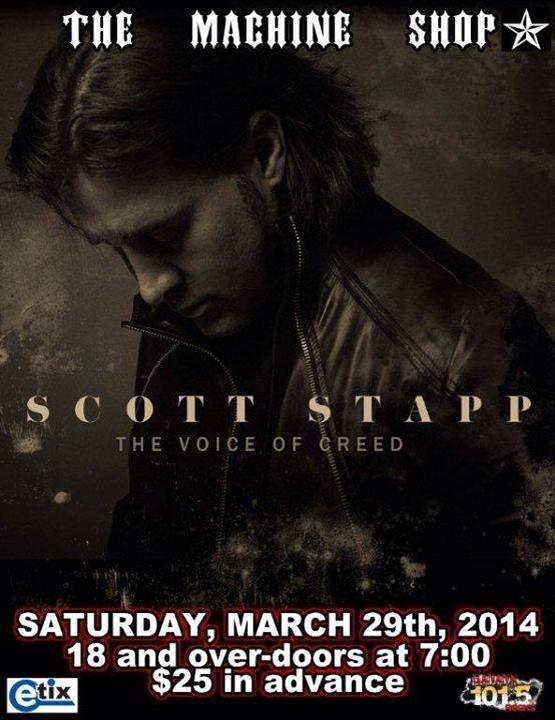 Want to win tickets and a meet and greet package for the Scott Stapp performance at The Machine Shop on March 29th in Flint, MI?