The Mitch Laddie Band get ready to release their first studio album in three years.

The band adopted a DIY approach to Let You Go. Without constraint or influence from others, they wrote, produced, engineered, and recorded the album themselves. This approach allowed the band the freedom to create the album that they wanted to put out.

In an age where everyone tries to pigeon hole artists into genres to make themselves feel comfortable, the Mitch Laddie Band break those boundaries and blur the lines. When you throw influences ranging from Miles Davis, Buddy Miles, Tower of Power, Prince, Robben Ford, and D’Angelo into a melting pot, the result is Let You Go. 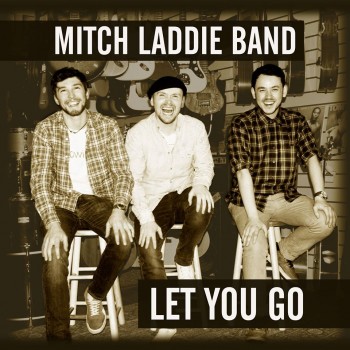 It is often said writing music is a therapeutic process. The theme that runs heavily through the album is letting go of the things that are holding you back. Throughout the album, there are four musical interludes that rework the riff from the title track.

Mitch Laddie is the protege of the great Walter Trout, and as you would want and expect the album features some sublime guitar playing. Laddie is joined by the rhythm section of Rhian Wilkinson (bass), and Matt Connor (drums) who lay down a tight groove.

The album has something for everyone from funky up-tempo numbers in the shape of “Take It Off,” “Cut Loose,” and “Speak Up” to more soulful numbers like “Crimson” and “Move On Over”. There are also a couple of familiar numbers on the album with the likes of “Linger” and “Open Your Eyes” that have been staple favorites in the band’s live set for a while. Both tracks were included on last year’s Mitch Laddie Band Live in Concert album.

Let You Go is a superb contemporary funky blues rock album that oozes with soul. So much music these days sounds the same, it is a breath of fresh air to see a band creating such an innovative record.

Let You Go will be released physically on the 18th September via MLB Productions.