When you’re unsigned, in today’s music scene, that’s not necessarily a hopeless situation. If drug abuse and cancer can’t hold you down neither will DIY.

Altered Existence as a band is Mark Ellsworth (bass/vocals), Jon Nieukirk (guitars), and Collin Glover (drums). Still touring in support of their latest release, Eyeconic, the fellas from Peoria, IllinoisÂ are looking for glory and continued good metal health. We managed to corner Mark and Jon into doing a small, forced bondage-like an interview to welcome them to Full Terror Assault 2015. Remember kids, metal legends will live forever like roaches of doom feasting on boy band corpses and pop singers. Enjoy the interview below.

NRR: What’s been going on with Altered Existence in the last year to catch the Full Terror Assault fans up to speed?
Mark Ellsworth: Well after finishing up our latest album full-length album, Eyeconic, in 2014 weâ€™ve been laying low figuring out personal situations and getting things ready on the home-front. Iâ€™ve been dealing with off and on again health issue for the last few years that cause us to strategize our schedule. Other than preparing for FTA, we’ve been trying out some new material and planning for further plans coming up.
NRR: Hopefully you guys have a great time on stage this year. Are you looking forward to anything in particular at FTA?
Mark Ellsworth: Really excited to see Obituary this year as well as all the great bands and friends that we get to play with from time to time. Also looking forward to seeing my NYDM family.
Jon Nieukirk: Obviously looking forward to bands like Napalm Death, Obituary, Iron Reagan, Revocation, Waco Jesus as well as many of our comrades in metal that weâ€™ve gotten to play with over the years.

NRR: Since the initial forming in 1991, what still has to be the most strange, bizarre, or simply hilarious thing you’ve witnessed on stage?
Mark Ellsworth: Many things, including a chick wind milling into the headstock of my bass and having to go back to the mic and not rip her hair out.
NRR: When did you know it was the right time to bring the band out of the moth balls of obscurity and reclaim its previous nastiness?
Mark Ellsworth: Well after recovering from drug addiction 1999 and getting diagnosed with cancer in 2002 and going into remission in 2003 I decided to get it back up in going in 2005.
NRR: Is that the theme to Rocky I hear playing in the background? Anyways, does not having a label behind you as a band make a huge difference in this time of DIY outfits?
Mark Ellsworth: No, Iâ€™ve heard numerous horror stories from many bands that have been on labels and have found that things are better done by the band itself. Yeah, it may suck that there is no support where labels could, but nowadays thatâ€™s almost a wash. The distribution is the more important part about getting the bands name out nowadays.
NRR: What can we expect from the band after FTA is a dark, maniacal scream of a power mad, German ghost until 2016?
Jon Nieukirk: Other than a few confirmed shows, (Slayfest 2015, and 5state NYDM Springbash 2016, etc) working on new Altered tunes, recording our folk metal side band(same members), and planning for next years metal conquest.
NRR: You’re self-described as Death/Thrash Metal. What will that translate to for the crowd when you hit the stage in a short amount of time?
Jon Nieukirk: Well for starters hopefully a lot of headbanging and circle pits at 11 am in the morning, as well as showing the fans that old school death/thrash is alive and well.
Mark Ellsworth: Hopefully heads will bang, and folks get tang!
NRR: How important is the merch table for a band like your and what do you do to keep the selection fresh for the fans?
Mark Ellsworth: Very important, cause thatâ€™s our main way of distributing our merch to the fans. Other than social media and YouTube, thatâ€™s the main way to get our music.
Jon Nieukirk: We self-support this band. Other than a few friends that help us out with artwork and miscellaneous things with pressing, we do all of our stuff in-house.
NRR: EYECONIC 2014, your latest album, was to hit this May, right? How are things with it and what would you want a new fan or old fan to take away from giving it a spin for the first time?
Jon Nieukirk: Our latest album is EYECONIC which we released in Sept 2014 and the one previous to that was, Something Unknown, in May 2011 which we released first with a European tour with Waco Jesus, Putrid Pile, and Dr. Orphyus Project. Weâ€™ve gotten really good reception from those who have heard it. Obviously we have been laying low for a bit so we would definitely like to promote it more. I think its our most solid album. Has a very old school but refreshed sound. I think people will most see that it has a very good flow to it and keeps it rockin’ all the way through the last song.
NRR: Give me a good history of the band, and why are you trying to make records with the amount of previous band members, with spontaneously exploding drummers, etc., or otherwise? 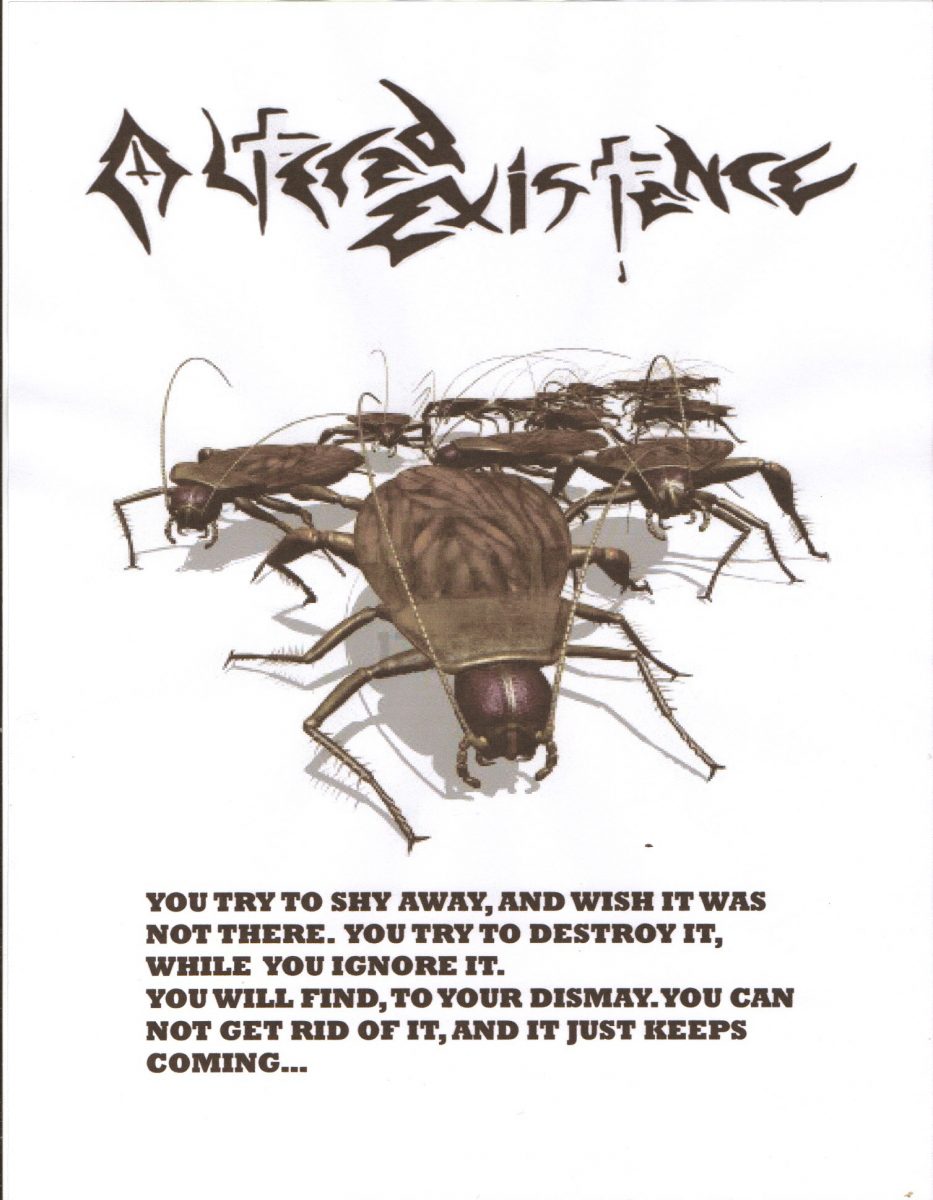 Mark Ellsworth: [We] as a band started in 1991, recorded and released first full-length, To Darkened Depths of Imagination, in 1995. We played with Broken Hope in 1994 (first death metal show at the Madison Theater in Peoria, Illinois). Headlined with Nile and Macabre at the Madison in 1997, Hiatus between 1999 and 2005. We then released, Created To Suffer, in 2007. Re-released TDDOI in 2008 on CD for first time. Released Dead Art in 2009. Released Something Unknown in 2011. Toured Europe with Waco Jesus, Putrid Pile, and Dr. Orphyus Project on the Underground Allstars Tour in March 2011. Opened for Master at the FUBAR in ST. Louis March 2013. And finally, released Eyeconic in 2014.