Ice sculpting in the cold season, Gwarbq, and even a little thing we call Dirt Fest 2015. Child Bite may need a retainer after this.

The most fun band in the lineup this year may be one to burst their Dirt Fest cherry in 2015. Child Bite is made up of the following stoners so please take note of when to light’em up during the show: Shawn Knight (vocals), Sean Clancy (bass), Brandon Sczomak (guitar), and Jeff Kraus (drums). This 2005 creation of Detroit Rock City cares, but not really, what you think about, well, anything really. If you’re confused already, you might want to have an adult beverage ready for question nine or so. Shawn sat down and made our heads hurt after we stopped laughing. Get ready folks, it’s a weird ride.

NRR: What’s been going on with the band from Detroit, MI in the last year?
Shawn Knight: This past year has been a big one for us. We recorded & released the “Strange Waste” EP on Housecore, and did a bit of touring for it in the fall with King Parrot and Acid Witch. All of that was based around the Housecore Horror Fest in Texas, which is always a blast. In the winter & spring we focused on writing our next full-length, which was tracked at Anselmo’s place down in New Orleans. That was a wild experience too; living with and working with a heavy metal legend for a couple weeks, ya know? Since then it has been tour after tour after tour, which won’t slow down until winter.
NRR: Hopefully you guys have a great time on stage this year. Are you looking forward to anything in particular at Dirt Fest 2015?
Shawn Knight: I’ve been aware of Dirt Fest but have never attended, so I’m just stoked to see how it all goes down. We might be an oddball on the bill, so we shall see how we are received, not that that really matters. That’s the good thing about Child Bite; it works no matter what. People love it, cool. People hate it, cool. We just get up there and do our 30 minute workout routine either way. Plus, I heard our slot starts at 4:20, which is appropriate ’cause we loves weeds and are big stoneheads.
NRR: Will we hear any new material at Dirt Fest this year, say from Strange Waste?
Shawn Knight: Oh yeah! We will play mostly shit from Strange Waste as well as the yet-to-be-released full length. Maybe one or two older jams, but in general we are all about the latest stuff.
NRR: Tell me about the band. How did you guys come together, anything special with the name, etc?
Shawn Knight: It started with me and a couple other dudes, and has slowly evolved into the mess that we are today. Child Bite is basically the band that people join when their other band has died, and they are too stupid to call it quits. The name is all about kids biting people/stuff, not adults biting kids. That’s fucked up and just unfair ’cause grown ups have way stronger jaws and years of practice chewing on shit. Little babies barely even have teeth, so let them gnaw on whatever the hell they want, at least until they become a tween and can really cause some damage.
NRR: You guys have been around for a while. Who has been the wildest band, besides yourselves, that you’ve played with and why if you can tell us?
Shawn Knight: Wildest? Hmmm… I’d probably say Nice Hooves. Those guys don’t give a goddamn about anything. Rad people.
NRR: What can we expect from Child Bite in the coming days after Dirt Fest is again a doomsday dream of a sleeping metal giant until 2016?
Shawn Knight: We are on tour with the mighty Down for another week or so after Dirt Fest, heading to Gwarbq which is gonna rule hard. Then we’re home for three weeks until we hit the road again with an amazing metal/noise rock band from Canada called KEN mode. Look ’em up. Soon after that tour we head to Texas for Housecore Horror Fest, and then our ice sculpting business starts to really pick up in December so the band will have to go on hold for a while. Bills to pay, etc.
NRR: Is there a band or bands on this year’s Dirt Fest line-up that you are looking forward to seeing as fans?
Shawn Knight: I wish I could see Fear Factory but they are the day before us. Beast In The Field is always a spectacle, that will be cool. And of course, Down, right? I can’t wait to hear whatever strange string of words happen to spill out of Phil’s mouth that night…
NRR: Beast In the Field said some good things about you guys too. How important is selling merch for a band like Child Bite at a festival like this, and how many different things will people see at your table?
Shawn Knight: Merch is super important for us, especially now that we are touring so much that we hardly have time for our day jobs. That’s why we try to make everything look extra rad and be of the highest quality. We have the new versions of Strange Waste with us, those turned out awesome. A bunch of new shirts too. We will also have a variety of stickers, buttons, and patches. All sorts of dumb shit for everybody’s personal taste and budget. Even folks with no money and terrible taste get something at the Child Bite table.

Child Bite “The Nab Munch Is On” – Official Music Video

NRR: For anyone that might not have heard your music before, what can they hope to get from your sound on stage being self described as Post Punk/Metal/Experimental?
Shawn Knight: It’s an amalgamation of each of our musical interests, so hopefully a bit of something for everyone, unless you like really terrible music. We don’t do that. But definitely heavy doses of early hardcore for example Black Flag, Dead Kennedys, Poison Idea, Nomeansno, and 90s alternative. And noise rock kind of shit like Helmet, Mr. Bungle, Nirvana, Rollins Band, Primus, etc, and some bits of metal too, though it might be harder to identify those chunks. But I grew up on shit like Slayer, Napalm Death, Celtic Frost, Pungent Stench, etc., so there is some of that disgusting shit buried deep in our tunes as well. Make sense? I didn’t think so…
NRR: My head hurts now, thanks. I really dig your vinyl pressing. What made this happen and are you glad it’s reached a second pressing?
Shawn Knight: Of course! We love running out of shit cause that means we can make more of it or make new stuff. We try to come up with interesting packaging for each release, and the double 45 gatefold was something we hadn’t attempted yet so we figured “why not?”. We knew we were gonna do that format before we even wrote the songs, and that decision dictated a gaggle of short tunes, which was a fun restriction to work within. All of those songs could easily be longer, making it a full length, but we felt like being economical on that release. You can never have too many short songs at your disposal. 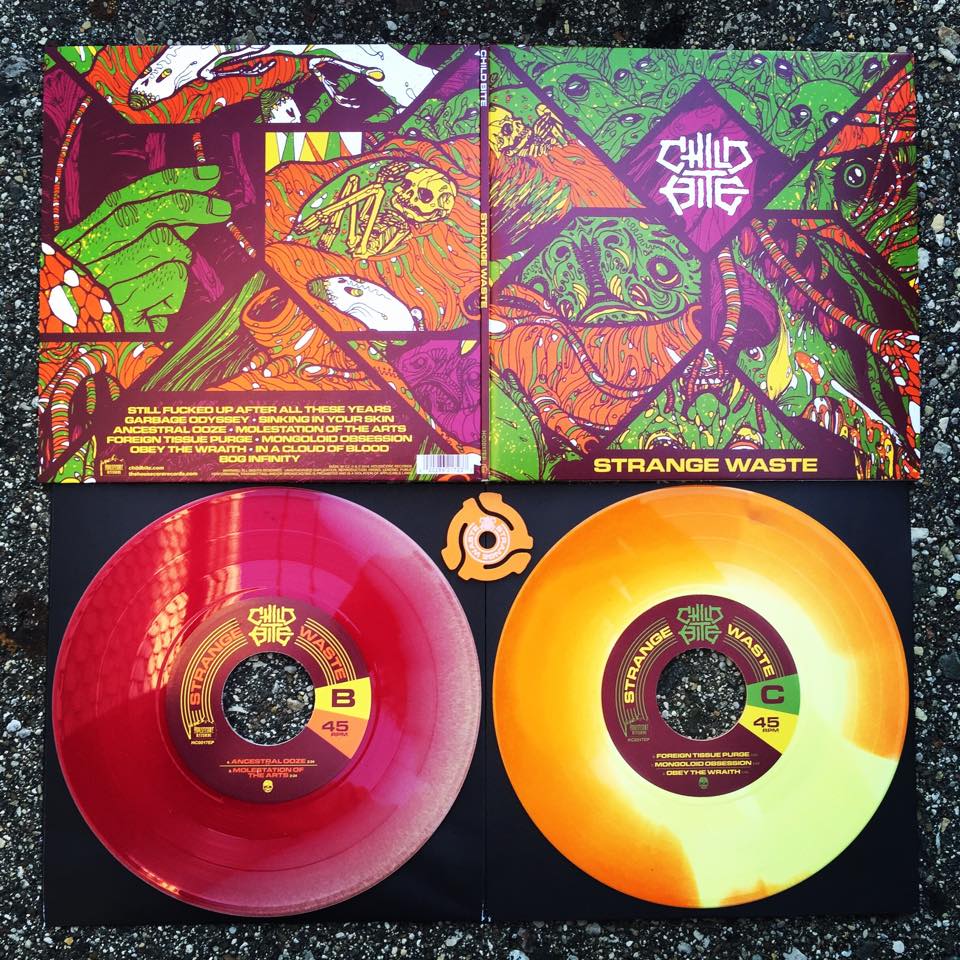