The last time something from Ohio kicked this much ass, Urban was on the way Ann Arbor. The bar is high for Below The Tide.

This five piece straight out of Akron, OH, known as Below The Tide, is Chris Conley (Vocals), Brian Lamtman (Drums), Travis Lamont (Guitar), Jacob Greder (Guitar), and James Neale-May (Bass). When your philosophy is, “Just five guys that want to have a good time. We don’t go to parties; we ARE the party,” it’s sure to be a-fuck-ing-fan-tast-ic time. Brian lost the pulling of straws and had to sit down with us for a few minutes to talk shop. This setup and the wait for their new album are the same here, way too long. So, enjoy!

NRR: You guys are from the Kent, OH area and I hope come dressed in OSU jerseys to play. What’s been going on with the band in the last year?
Brian Lamtman: First off thank you guys for taking the time to talk to us. We’re all from loving Akron, Ohio. However our hometown venue is located in Kent, The Outpost Concert Club. So far this year has been the busiest for Below The Tide. We’ve steadily been playing shows along with writing new material.
NRR: Hopefully you guys have a great time on stage this year. Are you looking forward to anything in particular at Dirt Fest 2015 to keep the mojo going?
Brian Lamtman: Man, We’re mostly just looking forward to getting on that stage and having the opportunity to play [while we] hopefully earn more new fans.

Below the Tide “Tell Your Hooker to Shut Up” (Lyric Video)

NRR: You guys are playing The Summer Slaughter Tour and Dirt Fest. Is there a huge difference between playing a touring show and playing a one or two day festival?
Brian Lamtman: We were not on the entire Summer Slaughter Tour. However, we did just play the Cleveland, OH date on Aug 02, 2015 which was absolutely amazing. But I would say no, not a big difference at all. From the past tours we’ve done, it doesn’t matter what stage we’re on or how many people are there, we are always going to get on stage and give 110%.
NRR: Below The Tide came out in 2013, pretty old by today’s standards. Are we going to hear any new material from you guys this year?
Brian Lamtman: Yes, you can expect some new material to be released from Below The Tide very soon. From the start, we went through quite a few member changes so there was always down time trying to teach a new guy old material. Now, we have a solid lineup we can be proud of. We recently just finished up a new EP with Joshua Wickman at Dreadcore Productions, producer of Within The Ruins, which is set to release in early November.
NRR: What are some of your influences musically and have you had a chance to play with any of them on stage?
Brian Lamtman: Our musical influences are all over the place to say the least. Every member of BTT has a different taste in music but, if we had to narrow down we are all Pantera kids at heart! So getting the chance to play on the same festival as Down and Hellyeah is pretty cool to us. However, even though we will never get the chance to play with the mighty Pantera we [still] have had the honor to share the stage with some truly amazing bands.
NRR: What can we expect from the Below The Tide camp in the coming days after Dirt Fest is but a dream of a metal, angry, sleeping dwarf until 2016? 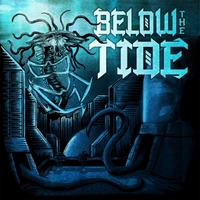 Brian Lamtman: After Dirt Fest we will be finishing up preparation for the release of the new EP. So stay tuned! We will be releasing a single very soon, (evil smile)!
NRR: Is there a band or bands on this year’s Dirt Fest line-up that you are looking forward to seeing as fans?
Brian Lamtman: I am a huge Down fan, always have been so very excited to see them again along with Upon A Burning Body and Periphrey to name a few…
NRR: How important is selling merch for you guys at a festival like this? Anything unique planned for the Dirt Fest 2015 faithful?
Brian Lamtman: Selling merch is huge for a DIY band like ourselves. It’s the only way to fill the gas tank. Our plan for selling merch at Dirt Fest will be the same as every show. Put on the best fucking show possible and if people dig it they will stop by your merch table.
NRR: For anyone that might not have heard your music before, what can they expect to get from your sound on stage being self described as a Melodic Deathcore band?
Brian Lamtman: You can expect to see a balls out energetic show. The melodic aspect comes from all our different influences. We like to change it up with different styles in every song.
NRR: You get washed out to sea while on tour. You see bacon, toilet paper, and case of beer floating next to you in the water as you come up on an island. You can keep one with you the entire time you’re stranded, one goes away after a day, and one never makes it. How does it go down for you, (laughing)?

Brian Lamtman: (After much gut busting laughing), well if you check our Instagram (OHIOBTT) you will quickly learn we would keep bacon around forever! (A few chortles more), then I would say we’re getting hammered on as much beer as we can drink till its gone. We don’t need the TP I’m sure. We would find something to wipe our asses on, (wiping the tears of mirth from his face)! We are opening up Dirt Fest Friday on the Main stage. See you all there!