Howie D. from Hard Edge Radio and National Rock Review recently talked to front man Chris Boles from Scottish pirate metal band, Alestorm. They talked about the history of the band, the upcoming new CD, the difference in crowd reactions when they play festival dates versus regular shows and more.

Alestrom is getting ready to release their new album, Sunset On The Golden Age. The album will be available starting August 1, with a US release date of August 5. The band has a bunch of dates for Europe lined up as well as playing the Heavy Montreal Music Festival next month. The band also hopes to schedule some US tour dates early net year immediately following the 70,000 Tons of Metal cruise.

Interview with Chris Boles from Alestorm

The new Alestorm record, Sunset On The Golden Age, available for pre-order from Amazon. 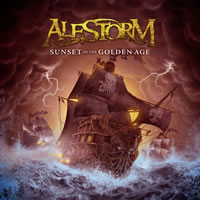 Sunset On The Golden Age CD