Thunderbolt by Saxon burns brightly with the power and glory of British Heavy metal wrapped in denim and leather while sending the metal horns flying high.

Like all great artists, Saxon are dedicated to their craft. Thunderbolt marks the twenty-second album by the band. This record finds the group riding a well-deserved resurgence in popularity. Thunderbolt is one of the heaviest and best albums in Saxon’s massive metal archive. 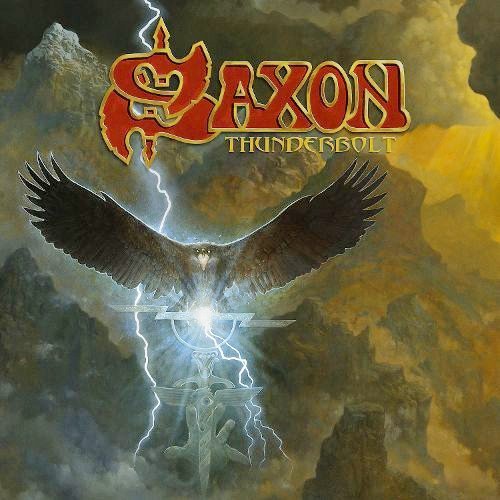 The performances and production on Thunderbolt are outstanding. Guitars and vocals are big and in your face, drums are crisp and sharp with the added fullness of reverb on the snare. The only mixing quibble could be the bass which seems somewhat subdued. This is a shame given the fine playing of Nibbs Carter. The songwriting holds true to the Saxon sound with potent riffs and compelling lyrics. This album is a treat for any metal fan and especially those who love classic metal with modern production.

The tribal drums and dark yawning guitars of the intro “Olympus Rising” give rise to the full on metallic attack of “Thunderbolt”. Crisp and crunchy guitars ride upon the popping snare and pounding kick drum of Nigel Glockler. Biff Byford sounds stellar as he reaches up high on the verse “heaven’s cry!”.

“Secret Of Flight” is a flat-out metal anthem. The single note pull-off intro riff cascades into headbanging glory. This is classic British metal at its best. The music gives the listener the sensation of soaring high and diving low as Biff tells the tale of man’s longing to reach for the sky.

Doug Scarratt and Paul Quinn are probably one of the most underrated guitar duos going in metal. They play spectacular solos on each tune, but really strut their stuff on the gothic waltz of “Nosferatu” and dual guitars of “Wizard’s Tale”.

Saxon got their road experience opening for the mighty Motorhead back in 1979. They pay homage to their mentors on the song “They Played Rock And Roll”. This song does a wonderful job of conveying the speed rock glory of Motorhead. Nibbs Carter and Nigel Glocker move this song along with muscular rhythm.

Another standout tune is “Predator” which sees Johan Hegg of Amon Amarth join Biff on vocals duties. The contrasting growl of Johan with Biffs tenor gives the song an unusual twist. The riffs and mid-paced cadence of the song imply a feeling of stalking the prey.

While many bands from the much-heralded New Wave Of British Heavy metal days have faded into irrelevance or worse become sad shells of their former glory, Saxon is more resplendent than ever before. ‘Thunderbolt’ finds Saxon burning on all 10 cylinders with horsepower to spare. They have created an incredibly listenable album that sounds good from the first spin through the 50th and beyond. Let the heavy metal of Thunderbolt by Saxon electrify your senses and set your ears on fire.