Wayne Static was the enigmatic former frontman and namesake of Static-X, who later forged a successful solo career. Static was scheduled to co-headline tours with Powerman 5000 and Drowning Pool over the next several months.

48-year-old Static grew up in Shelby, Michigan, where he played in his first band at the age of twelve. Also, while attending Shelby High School, he and fellow classmates played in a band for their school dances.

Static moved to Chicago where Billy Corgan (Smashing Pumpkins) introduced him to drummer Ken Jay. He and Jay formed a short-lived band called Deep Blue Dream. Following the demise of Deep Blue Dream, Static and Jay joined the Chicago metal band Stygian and recorded a demo under the name Drill only to end up moving to Los Angeles, California in 1994 in search of new band members.

They met guitarist Koichi Fukuda and bassist Tony Campos, and Static-X was formed. Originally intending to call the band Wisconsin Death Trip, they decided the name was too long and changed it to Static-X.

The band signed a deal with Warner Bros Records and released their debut album, Wisconsin Death Trip, in 1999. Static had said that the album title was taken from Michael Lesyâ€™s 1973 book of the same name. The book contains a collection of 19th century photographs, mostly taken in the city of Black River Falls, by photographer Charles Van Schaick along with local news reports from the same period. The book highlights the unpleasant aspects of Midwestern rural life under the pressures of urbanization, disease, crime and mental illness.

Not only did the book inspire the album title, but it is also responsible for capturing the imaginations of the band. According to an interview Static did with Guitar.com, â€œ[Itâ€™s] actually a book title that we stole. Itâ€™s been out of print for about 20 years. Itâ€™s a historical book about life in this small town in Wisconsin from 1890 to 1900. And itâ€™s about everything that happened, but it focuses on people dying and how they died. And there are pictures of dead people as well as stuff about natural disasters and fires and stuff like that.â€

In 1999, Wisconsin Death Trip peaked at #1 on the Top Heatseekers chart and #107 on the Billboard 200 chart. CMJ included the album in CMJâ€™s Loud Rock â€™99 Top 5 and in its review said, â€œStatic-Xâ€™s industrial/metal hybrid uses a guitar sound that keeps its songs refreshingly large, loud and groovable.â€ In 2001, the Recording Industry Association of America (RIAA) certified the album as platinum. 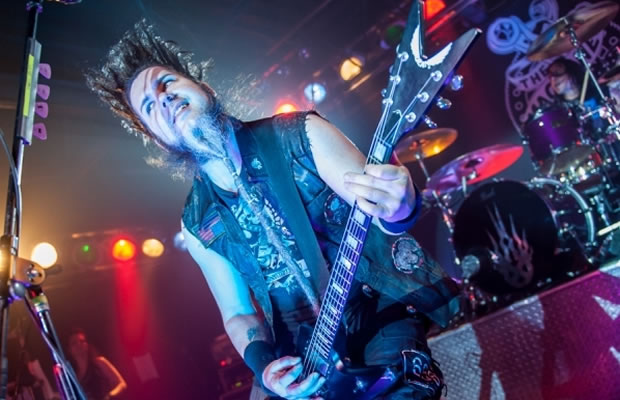 Years after its initial release, the album continues to be relevant in todayâ€™s world due in part to many of its tracks being utilized by game designers, film audio production teams, and star athletes. These songs have been used for the movies Torque, Valentine, Universal Soldier: The Return, and Bride of Chucky, for video games such as Omega Boost, Street Skater 2, Duke Nukem: Time to Kill, Duke Nukem: Land of the Babes, Rock Band, and Brutal Legend, and during the 2008 American Baseball League season, â€œThe Trance Is The Motionâ€ was used by American League All-Star and Cleveland Indians centerfielder Grady Sizemore as his entrance music.

In 2009, Campos and Fukuda left the band while Static started work on his Pighammer solo project. He released his debut solo album Pighammer in 2011 and decided to reform Static-X in 2012. Pighammer peaked at #97 on the Billboard 200. None of the original members would join him, so his solo band ended up touring under the name Static-X. This band consisted of Brent Ashley on bass, Sean Davidson on drums and Ashes on guitar. Static took this incarnation out on the road for the Noise Revolution Tour, however, the tour was cut short due to Static taking ill and requiring medical treatment.

In 2013, Static announced Static-Xâ€™s second break-up. According to Static, he disbanded Static-X due to disputes between himself and Campos over the right to the use of the Static-X name.

2014 commemorated the 15th anniversary of Wisconsin Death Trip. This platinum selling album is a fan favorite of Static-X fans everywhere and a staple in most nu-metal enthusiasts list of all-time favorite albums. As a thank-you to the fans, Static had been out on tour in celebration of the albumâ€™s anniversary playing the album in its entirety, as well as a few other hits during the encore.

Static’s widow, Tera Wray Static, had this to say about his untimely death, “I would like to thank everyone on behalf of all of Wayne’s family and myself for all the kind words from all of Wayne’s friends and fans and other bands. Wayne went very peacefully in his sleep and probably didn’t even know that it happened. (Which makes me feel better that he wasn’t in pain.) It will be sometime before we know why it happened but I will keep everyone informed. He had so much more to give the world. As his wife, biggest fan, and worshiper, I will keep him alive and finish everything that I can that he has been working on. He will never die and I want to share everything that I can that he has to give to his fans and friends. I will try my hardest to be strong and make him proud.” 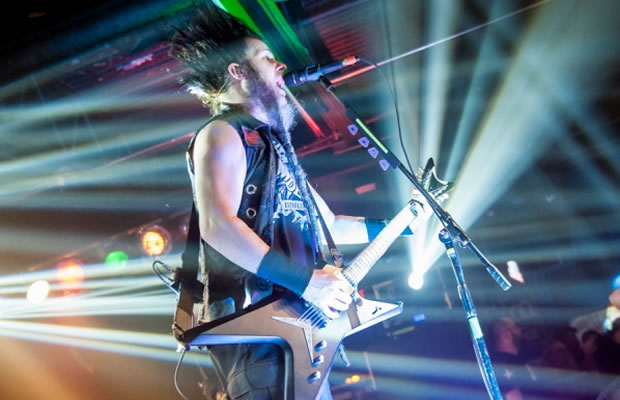 Known for his unique hairstyle and signature chintail beard, Static is, according to his official bio, â€œthe Terminator of contemporary rock music with his signature blunt-force-trauma melding of industrial rock, thrash metal and futuristic disco, which is nothing if not cybernetic. But when you look back at his 14-year legacy, the comparison goes beyond the music; having weathered musical trends, survived lineup shifts, and even severed long-time creative partnerships to emerge as a streamlined metallic machine.â€

Rumors have been running rampant on the Internet as to the cause of Static’s death. On what would have been Static’s birthday, Tera Wray Static had this further to say, “Today [Nov. 4] is my husband’s birthday and instead of celebrating his 49th year of life, we are grieving his short 48 years. It has come to my attention that many have questions and opinions about the cause of the death of my husband in which I now find is necessary to further respond.”

“Wayne was not taking drugs, if anything he was a drinker, and did not OD. The autopsy will be done by this weekend at the soonest, however for some of the test results it will take up to 6 months to get the actual death certificate finalized. I hope that the results I am given will have some insight, but they told me what I will receive this weekend will be deemed incomplete until all tests are back. We can all have opinions as to why. We all know that both Wayne and I had abused narcotics with alcohol in the past, which I am sure took a toll on his body, heart and soul. We were packing to travel on tour and were to leave that night, but it was Halloween and we decided to leave in the morning with our animals. I wish we had traveled that night then maybe had he fallen ill we could have gotten to the hospital. I will never know.”

“Wayne was a good soul and he is gone. That is what we do know. Please show some respect to him and his memory. We thank all that have left kind and positive messages in support of this terrible time. I am sure Wayne misses you too.”

On November 8, Blabbermouth posted that a spokesperson for the San Bernardino coroner’s office advised “no foul play is suspected” in Static’s death. The spokesperson told Blabbermouth, “While the manner of death is listed as pending, no foul play is suspected.” The coroner’s office is awaiting the toxicology results to return so that they may determine how Static died. This may be several weeks before those results come back so until then no one will know whether alcohol or drugs were a factor in his death.

Howie Herula of Hard Edge Radio interviewed Wayne just a couple of days before he passed. This is one of the very last interviews he did.

Photos of Static’s performance at The Machine Shop in Flint, Michigan on June 12, 2014 taken by our very own Thom Seling.