Guitarist Nita Strauss recently set up a Kickstarter for her first solo project, with amazing results.

Nita Strauss is currently on a break from touring with Alice Cooper, and is taking the time to work on her solo project. Nita took time out to speak with National Rock Review to discuss her Kickstarter as well as what inspired her to take up guitar in the first place.

NRR: First things first, I’d like to say congratulations! I was just looking on your Kickstarter page and you’re at $111,000 of a $20,000 goal! It’s just crazy.
Nita Strauss: It is! Thank you very much.
NRR: It shows there’s a huge amount of support, and I think people must be really interested to hear you do this album.
Nita Strauss: I think so, yes. It’s really flattering and gratifying to see. You never really know as a guitar player, especially as someone else’s guitar player, you never really know what the response is going to be. Do people it’s almost like do they like me for me or do they like me because I play with Alice so it’s really amazing for me to see that so many people actually were interested. And, you know, not just interested but to put their money where their mouth is and actually pre-order the record which was just such a huge, huge thing for me.
NRR: I was watching some of your interviews about your idea to make a solo album, and I guess you ran into Steve Vai back at Generation Axe in LA. So was it just totally out of the blue he asked you to contribute to the album he was making?
Nita Strauss: Literally, that’s exactly what it was, yeah. We were at Generation Axe and that’s the first time I met Steve Vai. And it was funny, because when I was introduced to him I kind of, you know, I had hoped that he would know who I was just because I’ve been an Ibanez artist for a long time, you know. Someone said “This is Nita,” he said “Hello, nice to meet you.” And I was like “Ah..” It’s ok, why should he know. And then he turned back, he said, “Wait, are you Nita Strauss?” And I about lost my mind! And I said yeah and he was like “Ok nice to meet you!” and then we started talking and that was a crazy thing all in itself and then he said “I’m putting this album together. Would you be interested in contributing a track to it?” and that’s how it all started.
NRR: I read that you just said “Yes” but had no idea and didn’t have a song written or anything. 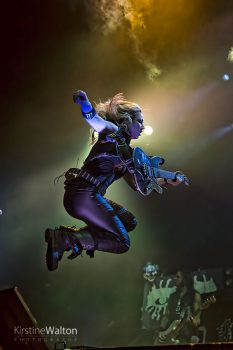 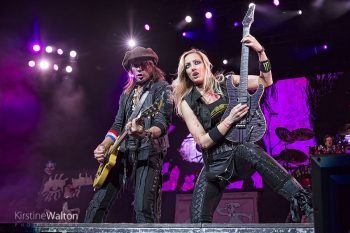