On a day where the North East has been battered by some of the worst weather conditions to have hit the region in recent times Stone Broken and touring counterparts Jared James Nichols and The Bad Flowers power through and arrive at the Riverside Newcastle against all odds.

To coin an old phrase – ‘the show must go on’, and that’s exactly the spirit which got a formidable trio of rock and blues talent and their fiercely loyal fans out in force on this bitterly cold and snowy Wednesday evening. 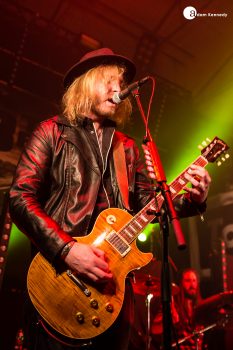 Hard rocking British trio The Bad Flowers kick off the proceedings early on. The group recently released their new album Starting Gun and have been deservedly receiving frequent airplay on Planet Rock Radio; on the strength of tonight’s performance, it’s easy to understand why. Hailing from the Midlands the band has an almost vintage Black Sabbath sound with a contemporary twist.

Tonight, The Bad Flowers takes the opportunity to showcase their debut offering with groove-heavy numbers like “Lion’s Blood”, “Be Your Man” and “Secrets” all featuring. Standout songs include the band’s incredible latest singles “Hurricane” and “Thunder Child”. Due to the inclement weather conditions the latter of which seems rather fitting, although in today’s instance it was the rather unusual Thundersnow which was witnessed by many in Newcastle for the first time this afternoon.

As a trio, the group can make more noise than most bands with twice as many members, The Bad Flowers come together seamlessly like a huge wall of sound. The band may well be a three-piece but who needs a rhythm guitar player when you’ve got Dale Tonks, who is arguably one of the most impressive bass players we’ve seen in recent times. The Bad Flowers certainly make an impact in the 30 minutes allotted to them. 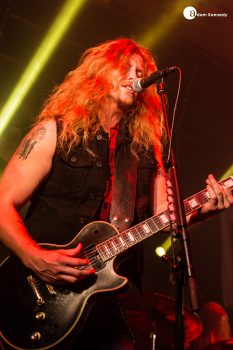 Jared James Nichols is no stranger to Newcastle having performed here several times in recent years with the likes of Glenn Hughes, Walter Trout and most recently Blue Oyster Cult.

Nichols released his sophomore album Black Magic last summer and tonight’s performance largely draws from his spellbinding new release. A bluesman through and through Nichols brings something a bit different to the proceedings.

Armed with his trusty Gibson Les Paul, Jared delivers a display of guitar mastery whilst demonstrating his new album to the full. Tracks like the hard rocking set opener “Last Chance”, the groove-heavy “Don’t Be Scared” and “Run” all feature. During the latter of which, Jared takes this old school genre and comes up with a sound which perfectly represents blues music in 2018. As has become customary, Nichols closes out his set with his incredible take on Mountain’s “Mississippi Queen”.

On the strength of Jared James Nichols set tonight and his new album on his next return to the UK he will inevitably be topping the bill.

Tonight marks Stone Broken’s third appearance at the Riverside Newcastle in just over twelve months, having opened for both Living Colour and Glenn Hughes last year. This time around the group return as headliners; a testament to the band’s meteoric rise in such a short period of time.

This evening’s show is one day prior to the release of the Midlands-based quartet’s sophomore album Ain’t Always Easy. Tonight the band boldly decides to include the lion’s share of their latest offering in the set. Stone Broken have been receiving a lot of airplay in recent times and new tracks like “The Only Thing I Need” certainly have the potential to follow suit. 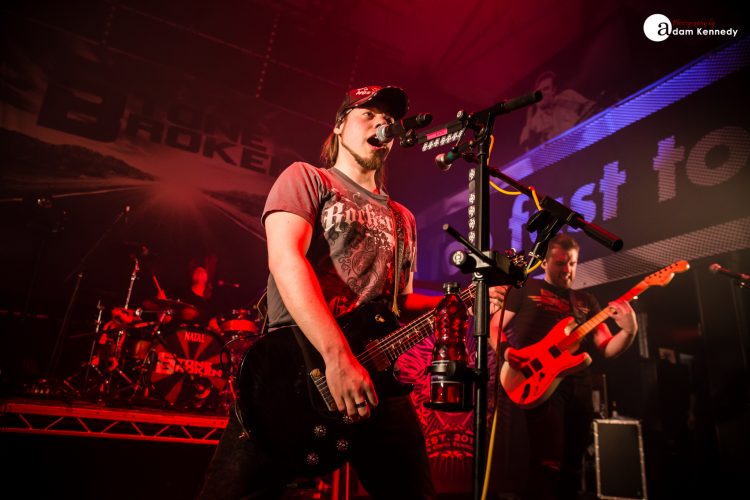 It becomes apparent that the songwriting on album number two also comes from a deeply personal place. With tracks like set opener “Heartbeat Away” addressing the issue of domestic violence, whereas heartfelt ballads like “Home” relate to yearning for your other half whilst apart.

On the other hand, one of the stand out tracks from the new record is “Doesn’t Matter”, which features late in the set and comes complete with some crunchy yet somewhat hypnotic guitar riffs, and in places conjures up images of Alter Bridge.

Of course, there is plenty of room for fan favourites like the anthemic “Stay All Night” and “Better” along with their self-admitted ‘stripper song’ “Let Me See It All”.

Drummer Robyn Haycock takes her moment in the spotlight during a frantic drum solo. Stone Broken close the night with crowd pleaser “Worth Fighting For” and a two-song duly deserved encore of “Wait For You” and “Not Your Enemy”.

Stone Broken’s new album is so strong that they manage to include half a dozen new tracks in the set before it’s even released, and the fans love every moment of it. The group’s sound has grown and evolved since the release of All In Time back in 2016. Stone Broken continue to go from strength to strength, a bright future beckons.