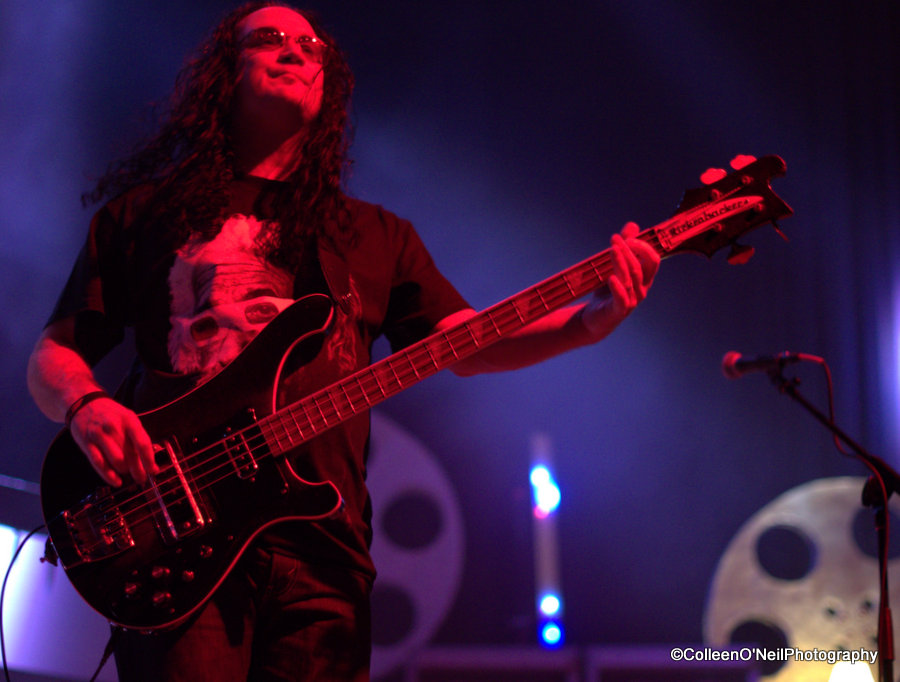 Bytor and the Snow Dog, Alloy Air Cars, and High Priests of the Temples of Syrinx… No, you have not entered the Twilight Zone, but you have entered another dimension of time. You are catapulted across the ages of time towards the music of Rush. You see a signpost up ahead and the notes shout out to you announcing: you have arrived at your final destination of Rush music; Thunderhead: The Rush Experience.

Thunderhead rolled into the Pageant in St. Louis, Missouri on January 18, 2014. They brought with them a storm of vivid musical art of the Rush catalog, highlighting thirty-three years of the album, Moving Pictures. St. Louis Radio station, KSHE-95, sponsored the event and even included a retro video of the first time the album was played on their station. Moving and ominous, Thunderhead is another example of the musical bedrock that is the St. Louis music scene.

Thunderhead included a wonderful light show and a fully decked out stage with many props, including the Moving Pictures gallery featured on the album cover, complete with red jump suit clad stage hands moving the gallery. In tribute bands, you can make two choices. You can look like the band, and sacrifice sound, or go with sound and forget appearance. Thunderhead gives the best of both experiences and is faithful to the look without going over the top and forgetting what Rush really is: the best in musicianship and visual appeal.

The band formed in 1996 by George Whitlow and has existed with different lineups since, showing the long-term focus of this project. The lineup today consists of Matt Meyer (guitar, vocals), Bill Audrain (bass guitar, vocals, and keyboards), Mike Ramsey (drums, percussion, electronic percussion).

I had already seen Thunderhead in December of 2012 at the Family Arena, and was looking forward to seeing them once again. Having read there was a new guitarist, I focused my attention on Matt Meyer the new member. Ramsey and Bass Audrain were already established in my mind as proven musicians during the previous concert, and they were back as familiar and solid musical mainstays.

Matt Meyer filled the technical masterpiece part of the guitarist quite well. He was a constant melodic professional. He conquered the guitar parts of Alex Lifeson with harmonics, fretboard hammering, and the minute rapid pace perfect solos that Lifeson is famously known for playing. Meyer is already an established musician and known for his great axe-wielding skills. This was his first performance with Thunderhead as he recently joined in September 2013.

Although Meyer played skillfully, noteworthy was his choice of guitars; mainly a Fender Stratocaster, which Lifeson mostly played during the 80s. This took away from some of the tone, which is an always-elusive piece for any guitarist. Meyer did play a Gibson Les Paul during some of the songs, but it did not include a Floyd Rose Tremolo, like Lifeson. Meyer cannot be blamed, I can barely hold on to the guitar collection I have, much less go out, and buy a Gibson double neck SG to play Xanadu. Regardless, he did a superb job with the guitars he had on hand. True Rush fan that I am, there is still something about seeing and hearing that white ES-355 sound, that is classic Rush.

Bill Audrain rounded out the sound with his pitch-perfect Geddy Lee energized vocals and never seemed to tire during the concert. Audrain conquered both the Rickenbacker Bass and Fender Jazz Bass, and really enjoyed interacting with guitarist Meyer, and drummer Ramsey. Audrain was a crowd pleaser and went about both sides of the stage while spending most of the times at his double stacked keyboard playing bass pedals, bass guitar, and singing the whole time. He was a true masterpiece musician.

Drummer Mike Ramsey completely dominated on his Tama drum kit. Not too many drummers in the world of rock can nail down Neil Peartâ€™s chops, but Ramsey did exceedingly well. Every drum fill was spectacular and his adept playing rounded out the monstrous sound, which this awesome Thunderhead trio is known for playing. Ramseyâ€™s drum kit included a rotating riser decked out in Camera Eye regalia, which rotated several times with the crowd roaring in satisfaction. The riser rotated 180 degrees to reveal an electronic kit used on several songs. The best of air drummers in the audience were playing along with Ramseyâ€™s fluid drumming fills.

The massive set list would have turned any able-bodied musician into a blubbering pool of mush. Thunderhead dominated the music. The added feature is the listener gets to hear Rush songs which Rush never has time to play in their standard concert set list. Thunderhead delivers the goods by playing true to these wonderful Rush songs. Each year they focus on a different aspect of the vast musical heritage that is Rush.

Thunderhead Rush is definitely worth anyoneâ€™s time and money, Rush fan or not. This band has what it takes and the resources to do it right. Thunderhead would fully be able to successfully tour and take their show on the road. I would fully recommend them to anyone wanting to hear a legitimate sounding Rush tribute. After all The World is indeed their stage!