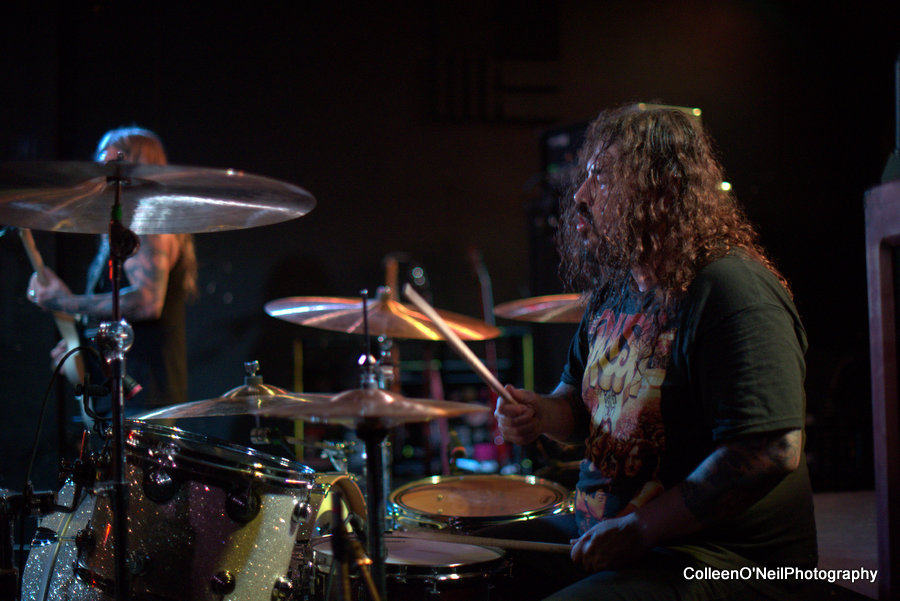 An incredible journey into Doom Metal took place in St. Louis, Missouri at Fubar on April 3, 2014. Doom metal bands, PilgrimÂ and Spirit Caravan, have embarked on a massive US tour, with 30+ stops across the country.Â Â Bringing their own cutting-edge, innovative, quality music built on fuzz, thick heavy chords, and mind voyaging lyrics, these two bands are part of the hottest tour out there today in this style of music.

Pilgrim is a power trio from Rhode Island with a very ominous aura. With names like ‘Krolg, Slayer of Men’ on drums and ‘The Wizard’ on guitar, it has got to be interesting. The experience seeing Pilgrim is one of high theatrics. The lyrics are heavy with references to the occult, fantasy, and epic tales.

Their music consists of great guitar riffs designed to hook the listener while coating it with thick sludgy guitar tone well suited for someplace dark and dismal. Haunting vocals finish the experience. With such a sense of drama, it is hard for a fan not to be captivated.

Spirit Caravan completely blew my mind. They play riff-oriented rock with a solid rhythm and great hooks. Their lyrics are intellectually stimulating to boot.

These guys are well-known in the genre of doom metal. They are professional in their approach and work well together to bring a solid stage performance to their fans. Their cohesive vibe was immediately embraced by the audience.

Much has been written about Scott Weinrich and it’s easy to see why. His guitar expertise is amazing and he clearly dominated the fretboard. At one point, he even used an electronic guitar pick that caught the movement of the strings. Truly incredible! His solos were intense and his outstanding vocal skills sealed the deal. A highlight of the evening was Dead Love/Jug Fulla Sun, which poured out of Winoâ€™s old, vintage, Sunn amplifier.

Dave Sherman wielded the secret weapon of the band: a Gibson Hollow body EB-2, complete with a pedal board that would be the envy of any guitar player. Sherman kicked out the jams and mixed well with Winoâ€™s vocals. I was situated on Shermanâ€™s side of the stage and it was great being blasted with his funky grooves and aggressive playing style.

To signal the end of the set, Sherman placed his bass facing toward the amplifier causing the pickups feedback with a loud ringing noise, like Lemmy of MotÃ¶rhead. Â Henry Vasquez smashed the skins, while maintaining eye contact with Wino, as he slammed the toms and the bashed the snare with precision. No doubt the drums would have been hurled off the stage if not for the cinder block holding the kit down.

After the show, I spoke with the members of the band and wished them well on their next journey. These guys don’t put on any airs and show genuine interest in their fans.

Catch them on their current tour, which includes festival appearances at Desertfest and Hellfest. Donâ€™t miss them!