Samhain celebrated the final night of their 30 anniversary farewell tour, at a sold out performance on the pagan holiday the band is named after.

Samhain, fronted by legendary performer Glenn Danzig, played their first show in New York City 30Â years ago in 1984, at the now defunct venue, the Rock Hotel. Now, thirty years later, Samhain returned to NYC to bid farewell to their die-hard fans at a sold-out performance at the Best Buy theater. This was one of only three scheduled shows on the east coast , and the final stop on the farewell reunion tour,Â Samhain 30 Bloody Years.

Opening up the show was the Philadelphia hardcore punk band,Â YDI. The band formed in the early 80s, and were the openers onÂ the first ever Samhain show. Having them open at Samhainâ€™s final performance was an appropriate tribute to history of Samhain, and their performance set the tone for the evening.

Next up was Cleveland based band,Â Midnight. Midnight are a throw back to the first wave of Â Black Metal. They were personally hand-picked by Glenn Danzig. The audience was looking forward to their performance, and Â hearing what gift Danzig will unleash to his public.

As the up and coming band tore into “Unholy and Rotten,” the audience was taken back to the sounds of Venom, the true fathers of black metal. People have oftenÂ wondered what if the black metal sound remained as that which Cronos started back in the late 70s. Without a doubt, Midnight is that band.

The raw and grit of the song “Black Rock and Roll” had that MotÃ¶rheadÂ tone as the band did flips and roamed about the stage. The hellacious sound emanating was infectious and fun. The guitar solo for “Lust, Filth and Sleaze” has a chainsaw speed intro withÂ ferocious angst.Â “Evil Like A Knife” was next. TakingÂ a breather and focusingÂ on the band, I noticedÂ Glenn Danzig at side-stage with a grinning approval of the band. That will be a personal unforgettable moment. He looked towards me and nodded as he escaped back into the curtains.

Before we knew it, MidnightÂ was unexpectedly jumping all over the stage like demons dancing around a bonfire. Next was the melodic “You Can’t Stop Steel”, with a guitar riff that had the crowd humming all night. These masked invaders showed their sense of humor side with the track “Endless Slut,” tongue in cheek and the most hardcore punk song of the night.

Their next song, “Satanic Royalty,” can easily be on a horror film soundtrack. These appointed acolytes of Danzig have the goods to give black metal a needed kick in the ass that it deserves. But not before they praise Beelzebub’s home turf in there closer “All Hail Hell.”

As the band finished playing, Â the frontman AthenarÂ ( AKA Jamie Walter) came back on stage and smashed a guitar, which he handed over to a lucky fan in the audience. Midnight left the audience wanting more. They were the perfect opener and one band to keep your eyes on. I encourage people to get behind this band. Buy their CD or purchase the album on iTunes. If it’s good enough for Danzig then it’s good enough… ’nuff said. 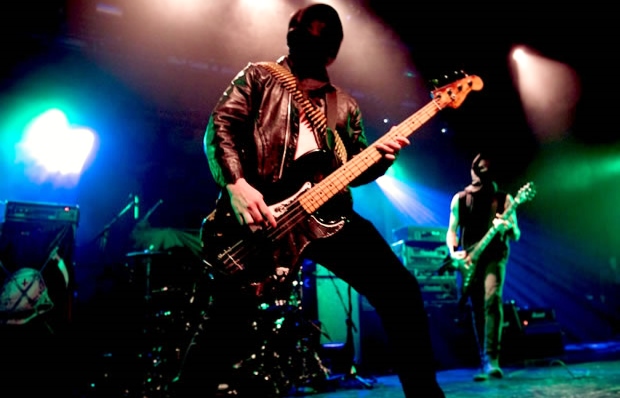 Following the insane trio of Midnight was New Orleans basedÂ Goatwhore. Sammy Duet formed the group after the break up of the stoner metal band,Â Acid Bath. Having a death metal band seemed odd for a Samhain bill. However once they kicked off with “Poisoning Existence in Reawakening,” it was understood.

The band was touring in support of the new album, Constricting Rage of the Merciless. The music is testosterone driven, as evidenced with songs like An “End to Nothing” and “In Deathless Tradition.” It seemed the band attempted to apply the drone style of music in this set that Acid Bath was famous for.Â It worked, and the crowd loved it

FansÂ launched into each other head first. You could actually hear heads smacking into each other. It was amusing to see the carnage unfold, as well as all the concussions being planted this night. Lead vocalist Ben Falgoust encouraged this throughout the night. He showed his sense of humor side when he said to the audience “Pump your fists in the air like it’s a Judas Priest show in 1984.” The crowd connected with him and the band. Their explosive set and powerful performance got everyone ready for the main event.

Once the November Coming Fire backdrop was lit up, you could actually see the Samhain crowd emerge. The festivities were about to begin!!

As it drew closer to the witching hour, those in attendance understood that this was the final time the influential band, Samhain (pronounced Sowan), was taking the stage. Named for the Pagan holiday, the band was formed by Glenn Danzig immediately after his departure from the Misfits. Samhain was darker, heavier, and more experimental. Samhain celebrated their 30th anniversary as a band, and their debut album, Initium, which they played in its entirety.

Samhain started their set with the drone/occult/sludge sound intro, “Initium.” The ambient sound of this opener riled up forbidden feelings and thought. Once we fixated at the marvel that is known as Samhain, all the members were covered in blood as they tore into “Black Dream.” The sound shows the maturation of sex and violence all wrapped into one huge taboo.

Next up was “All Murder, All Guts, All Fun.” As horrific the lyrical content was, it sounded melodic with a 50’s prototype approach, something that demonstratedÂ Danzig for the creative song writer he is. The energy was intense and charged with a splash of carnal desire.

Another good example of his writing talent isÂ “Macabre.” The peak of the song was the John Cage inspired philosophy slightly over the one minute mark. As Danzig shouted, “Birth is Pain,” goosebumps were at their pinnacle. The tri-tone structure of the songs invaded our space, andÂ we willingly accepted our initiation to the left hand path.

AsÂ the crowd gathered their composure, the beautifully violent song, “He-Who-Can-Not-Be-Named” was echoing throughout the venue. We stood in awe of the consistent energy emanating from the band. Â TheÂ celebration continued with the melodic “Horror Biz.” The audience responded with mosh pits that resembled a painting from Hieronymus Bosch. The energy flowed with the songs “The Shift” and “The Howl.”

NextÂ wasÂ a rarity. Danzig strapped on a beautiful black Gibson Les Paul, and played my personal favorite from the Initium record. “Archangel” is one of the most beautiful songs in the entire Samhain catalog. Things got really interesting after this, an intermission followed in the form of “Misery Tomb” from Final Descent. The bandÂ played all the classics, as they did half of the record of Unholy Passion. They ended the night with six classic tracks from November Coming Fire. “To Walk the Night” had the waltzy vibe that got many in the audience moving to the music

November firstÂ was not only a celebration of the dead. It reminded us to live life to the fullest. The band did their tribute to this Samhain night by playing “Halloween II,” complete with the Latin Verses.

We came in to see a performance and came out with a blessing that only can be described as a baptism.

Danzig said, “This is the closest we gonna get for a full Samhain reunion, enjoy it while it lasts because we ain’t doing this again.” Danzig closed the night by asking what songs fans wanted to hear. The crowd chose the fitting song, “Let The Day Begin.”

Samhain closed a chapter of an important musical Legacy in our Gotham grounds of NYC. One can only wonder what is in store for Glenn Danzig for 2015. Recently it was announced our evil Elvis will be busy recording the long-awaited Elvis tribute record, a song for the popular series the Walking Dead, and a new Â Danzig record! Keep your eyes and ears opened for that.

Note: Due to strict concert policy, no photography was permitted for Goatwhore and Samhain. However, Danzig was kind enough to allow Midnight photography privileges for the evening.