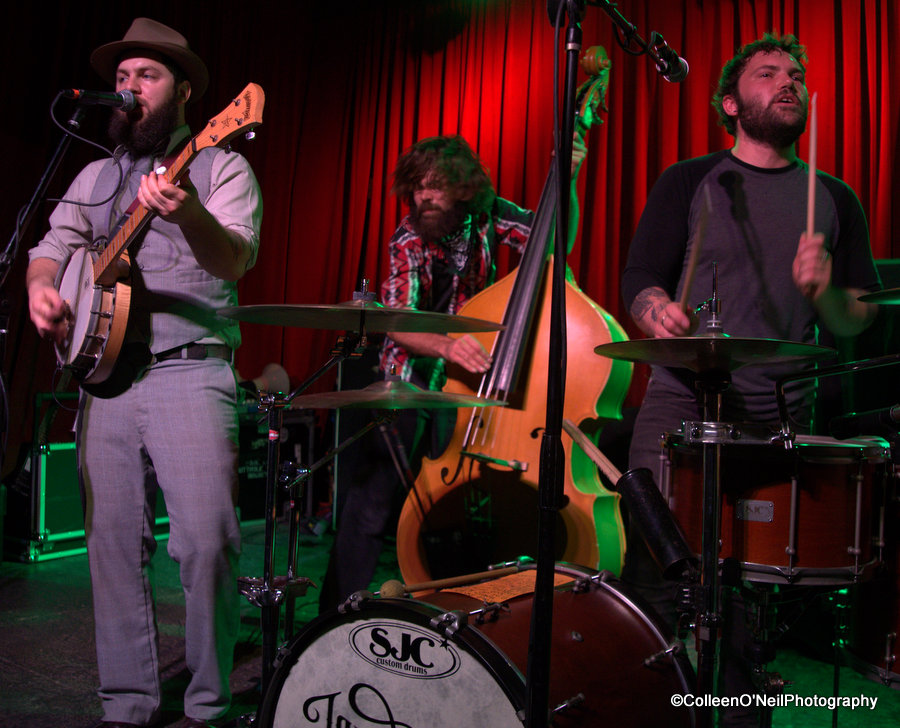 Do you like rock? Bluegrass? Old-school country? Folk? Horns? Punk? Soul? You can get it ALL from Larry and His Flask. The five-piece band from central Oregon brought their foot stompin’, bluegrass / soul / brass band / punk / alt-country sound to a packed crowd at Off Broadway in the historic Cherokee Lemp district in St. Louis on March 23, 2014.

Although the band has its roots in placing the party over perfection, its new direction is firmly grounded in musical excellence. Â The fun remains in full force, but the line up is an accomplished group of musicians whom have found their niche in playing ‘good times’ music to fulfillment.

The crowd reacted accordingly and sang, danced, foot-stomped, and bounced rightÂ along with the band. After the performance, the guys were graciously available to talk with and sign items for their appreciative audience.

Opening for Larry and His Flask was Scott H. Biram, a self-proclaimed ‘Dirty Old One-Man Band’. Biram miraculously blends Depression-era blues, hillbilly, old-school country, raucous punk, and metal together in a tangled-wire and beat-up amplifier. Â His left foot provides the relentless, pounding, backbeat to his growling and snarling vocals, bringing to mind liquor and strip clubs one minute yet preach like a tent-revivalist the next.

Biram was a fantastic opener, and many in the crowd were well familiar with his material, dancing and singing along to every song.

Incredible show from start to finish!