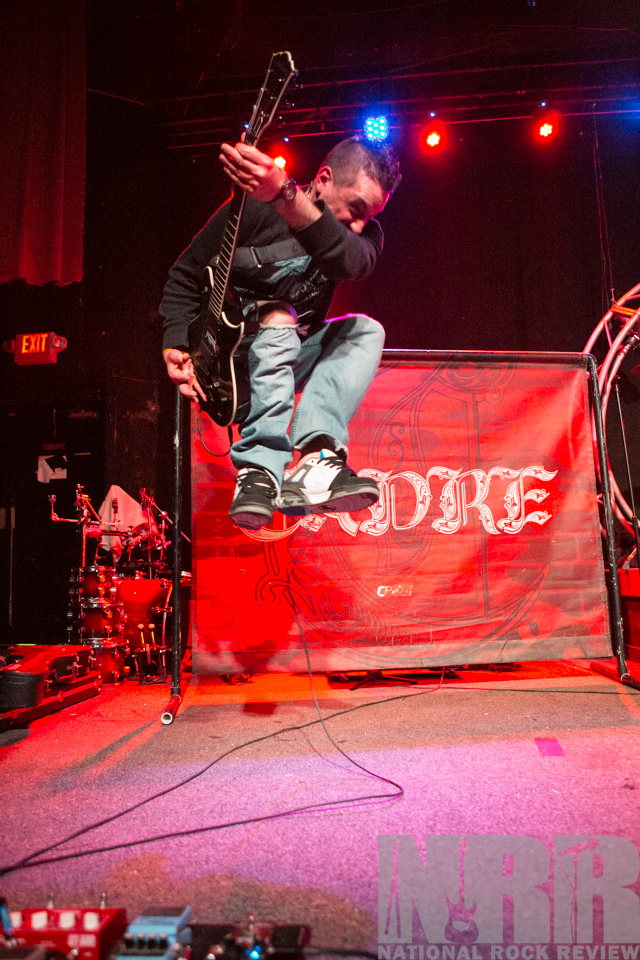 The weather outside was awful, but that didn’t stop the 2nd anniversary party for Hard Edge Radio at the Diesel Concert Theater. Howie D. put together one hell of a show celebrating the occasion. Nine bands on two stages provided an unforgettable night of hard rock and metal that was enjoyed by all.

First up was Aggravated Assault, a newer band on the metal scene that opened the show with a bang and captured the crowd’s attention quick. Next up was Soul Maker, performing what I would best describe as melodic grunge. The crowd was still small due to the time and weather, but those who did show got an earful of good tunes.

The third band to take the stage was Hate Unbound. I’m usually not a big fan of cover songs, but these guys did a rendition of Paint it Black by the Rolling Stones that just blew me away. It takes a lot of balls to cover such a coveted classic. These guys made the song their own and I was sold. Their music was driving and on time.

Following them was Ignoring the Echoes, who came on stage, just as the crowd was starting to thaw out from the blizzard. The band had a distinct sound reminiscent of Queensryche. Two wailing guitars, let loose by Bobby Mullins and Joshua McCormack, really set the tone of the band and, combined with outstanding vocals by Derek Tuttle, made them unstoppable.

The Worst Of rolled onto the stage next and they were anything but what their moniker implies. This band is a torrent of energy on stage! These guys literally stopped me in my tracks. They were that good. Truly a great performance.

Next on stage was a band that I should have known but didn’t. Bloodline Riot have all of the pieces together to make it as a national act. 58,000 ‘likes’ on Facebook and I honestly think they deserve more. Thankfully they drew in a significant crowd despite the weather. The fans showed a ton of support. This is a headline act without question in my book. I can’t wait to see these guys again (and again… and again). They have a great stage presence all around, but the guitar work of Jason Caine really stood out.

A.S.S., fronted by lead singer Brian Thomas from the legendary Halloween, took the stage next. They were well seasoned with an abundance of attitude, humor, and sarcasm. But, donâ€™t be fooled; they have put a great deal of work into their music and it shows. Quite simply… A.S.S. ‘kicks ass’.

Cadre, led by their energetic lead singer, Johnny Mascioli, followed Halloween. The crowd remained motivated while the band kept heads bobbing and put on a great show both musically and visually.

Wrapping up the anniversary show, headliner Wulfhook took over. If youâ€™re unfamiliar with the band, just close your eyes and listen and one band will come to mind. The influence of Iron Maiden is undeniable. Lead singer, Jeff Sling, has an absolutely incredible voice. I felt like I was transported back to 1986; behind the wheel in my â€™67 Plymouth Valiant, speakers in the back, windows rattling as the volume was cranked past 10. I know a lot of people complain that music today isnâ€™t what it should be. Well, stop your bitching, get off your ass, and go see bands like Wulfhook. These guys could, should, and I think will, get BIG.

A very special thank you to Diesel Concert Theater for putting on another spectacular show and to Hard Edge Radio for organizing it. The sound is spot on, the lighting is great, and the staff is friendly. This venue kicks ass and is getting bigger. Two stages keep the music flowing with no down time between sets. Improvements are noticeable each time I visit and they are rumored to be expanding to a third stage. Excellent venue and killer anniversary show!

Article and images by Joe Orlando