The former Queensryche frontman serves up a spectacular evening in Louisville with Year of the Gun and South of Never.

06-Apr-2016: There was a definite feeling of excitement moments before Geoff Tate’s Operation: Mindcrime took to the Headliners Music Hall stage along with a solid roar of approval as Geoff Tate took his place center stage.

Immediately setting the tone for the evening, Operation: Mindcrime started their set with “Neue Regel” from Queensryche’s 1986 album, Rage for Order. “Neue Regel” is German, meaning “New Regime” or “New Order.” With lyrics like, “I will light the way for us to find Order of a new kind,” it would seem a statement that Operation: Mindcrime is indeed a New Regime or New Order for fans of Queensryche and Tate.

Following a fantastic rendition of “Screaming in Digital,” Geoff Tate told the audience that they would be playing “all the songs” during their set before explaining how the next song, “I am I,” came to be, his response to the question, “Who are you?”

With little hesitation, they rolled into” One More Time Around”Â before huge fan favorite “I Don’t Believe in Love”Â that had the whole audience singing along; it was a great show moment.

Tate, slowing things down a bit, spoke of acoustic instruments being the most honest instruments and the ones you reach for when writing a song. The guys each changed to their acoustic instruments, including an upright bass. The band started their four-song acoustic set with stirring performances of “Jet City Woman” and “Take Hold of the Flame.”

Tate took a moment to explain about being frequently approached by people who share how certain songs have impacted their lives and hold special meaning. He remarked that “We have music” to get us through. “This is one of those songs,” he said as the band went right into Queensryche’s biggest hit, “Silent Lucidity.” The crowd sang along word for word as he smiled his approval.

After singing the final line, “I am smiling next to you, in Silent Lucidity,” he put his hand over his heart and said, “Always. I promise.” There was an incredibly intimate connection between singer and audience that carried into the next song, “The Weight of the World,” from Queensryche’s 2013 release: Frequency Unknown. 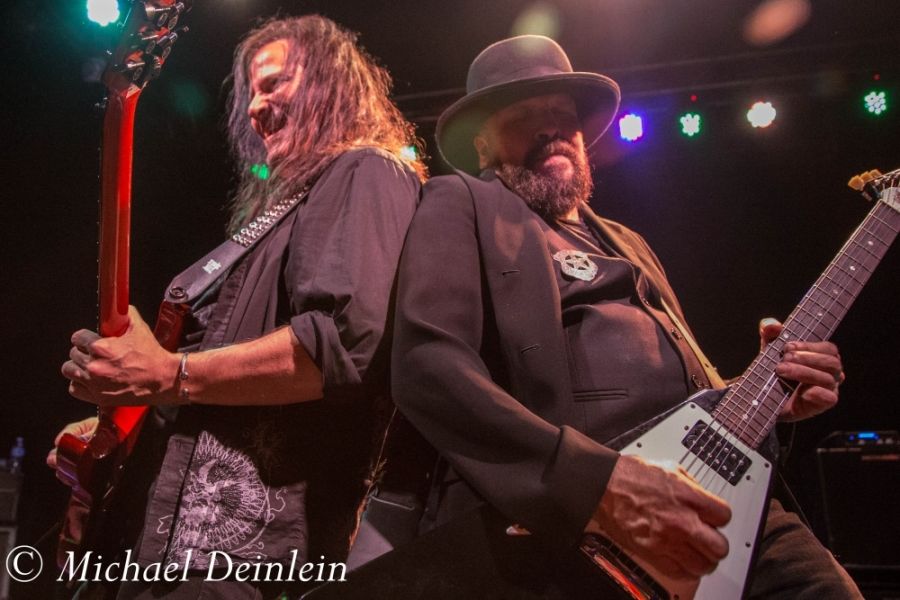 After reeling the crowd in during their fantastic acoustic set, they jumped back to the present with four songs from Operation: Mindcrime’s debut release, The Key, starting with “Re-Inventing the Future.” Capitalizing on the energy in the room, Operation: Mindcrime rolled into “The Stranger,” “Burn” and “The Fall” with Geoff playing the saxophone during the song providing another memorable show moment.

Now more than 90 minutes into their fantastic set and with the crowd hinging on every word, Geoff Tate and Operation: Mindcrime tear into the bass heavy Queensryche tune, “Damaged,” along with fan favorite “Walk in the Shadows.” They finish their main set with another fan favorite, “Eyes of a Stranger,” that has the room moving straight from the opening chords.

As the guys come back on stage for their encore songs, Geoff asks the room, “Do you have anything left?”

The crowd answers simply with a loud, deafening roar.

Their encore starts off with “Breaking the Silence” and ends with another huge fan favorite, “Empire,” and left no doubt that Geoff Tate’s Operation: Mindcrime owned the stage, the material, and the audience tonite. Neue Regel, indeed.

Geoff Tate still has the powerhouse voice that made him one of the best metal vocalists, then and now. He is the ultimate showman with an understated flair for the dramatic, and a natural storyteller as evidenced during his banter between songs, going so far as to say later in the night, “I feel as though we know each other now.”

The band was fantastic this evening, featuring all of the power and complexity you would expect and they were clearly having a great time on stage. After the final bow, the guys high-fived and fist bumped everyone within reach of the stage for one last fan connection.

Terry Harper always seems to have the perfect local groups supporting the shows he promotes and tonight was a prime example. Louisville-based Southern power rockers, Year of the Gun, provided the night’s primary support. Their 45-minute set of original songs was hard and clean, featuring distinctive vocals and was well received.

Hailing from Georgetown, Kentucky, South of Never opened the evening with a 30-minute set of original music that featured some great guitar work and was dominated by front man, Michael Duncan.