New label, new album out, and new tour already off to an interesting start. No one ever said the music business was boring, brother.

Poison Words, the latest album by The Convalescence, is out and the band is already on the road to push it to the unsuspecting masses. The Poison Words Tour started on Apr 01, 2016, and will run until the bus breaks down or the phone calls stop coming in for the band to play.

On the mighty Realm stage, Keith Wampler (vocals), John Jones (guitar), Zac Lunsford (guitar), Spencer Kropog (bass), Justin Dubay (drums), and Katie McCrimmon (keys) gave a grand performance for their faithful hometown fans. Playing old songs with some new ones off of the new LP, the face paint was completely gone by the time Keith was done leaving all of his sweat and heart on the floor of the concert hall. The first show of the tour was a good indicator of the coming stops, non-Canadian, and if you are into this genre of music, a must see for those that want to be ahead of the curve.

Starting the show off was Lifeforce. This local area band from Monroe, Michigan is Bill Bones (vocals, guitar), Tweak (vocals, bass), and Cody (vocals, drums). After the ice was broken, the next band up was I, Monarch. This Blissfield, MI four piece is Ryan Patterson (vocals), Cody Gibbs (drums), Greg MacBeth (guitar), and Pat Young (bass). If you’re in the area of The Crofoot Ballroom, catch the guys opening for A War Within on Apr 22, 2016.

Third up on the bill was a Detroit beloved thrash band with the National Rock Review stamp of approval, Pick Axe Preacher. This windmilling foursome, well three guys can but you get the idea, is comprised of Mike Williams (vocals), Mike Hopper (guitar), Stu Stevens (bass), and Mike Gatley (drums). Their set truly energized the crowd at Realm and was a pleasant surprise for the majority of the folks that had never seen the band before.

And then there were three outfits left, on this grand night of the release party, to play. Beside The Silence is a Cleveland formed in 2013. Its members consist of Darrin Lewis (vocals), Michael Risser (guitar), Justin Thacker (guitar), Nick Lucas (bass), and Donny Robertson (drums). The Ferocious Records signed band is excited to be dropping Purge of Impurity soon and accepting pre-orders as you read this review.

So This Is Suffering was the final warmup before The Convalescence took the stage. Zedadiah Martinez (vocals), Robert Brown (guitar), Fabrizio Toscano (guitar), James Williams (bass), and Zechariah Gamez (drums) tore the stage up for the crowd awaiting their foundations to be wrecked to the ground. The Victorville, California quintet has been on a mission since 2007 and is signed to Unique Leader Records. Definitely catch their high energy set if they come close to your neck of the woods. 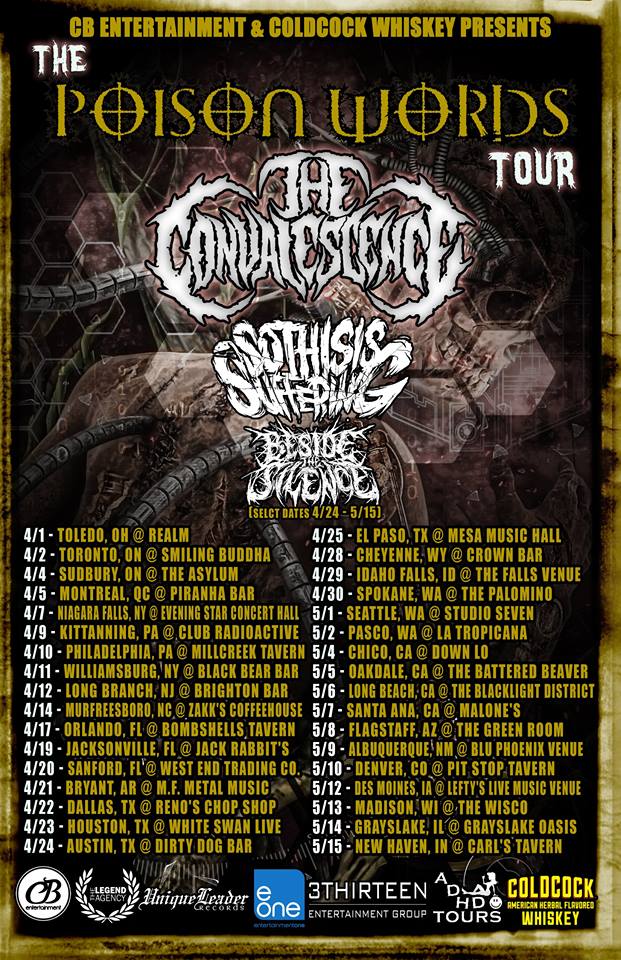