When Eddie Vedder and Chester Bennington are in your corner, it might mean the new F.L.O.W. album just might be worth a listen to.

This four-piece currently from New Orleans, LA was originally formed in 2002-2003 by guitarist and singer Phil Taylor. The band, Future Leaders Of The World or F.L.O.W., has seen some tumultuous times and is now made up of Phil Taylor (Vocals), Ian Severson (Guitar), Jarred Mosely (Bass), and Russell Bullock (Drums). F.L.O.W. is making waves already with the new LP entitled, Reveal, due out Mar 10, 2015 from Pavement Entertainment. The album is slated to be twelve tracks and has some songs out already to get a preview of the entire record.

While rock icon Eddie Vedder is very high of opinion on the band, calling Phil the â€œmodern day Kurt Cobain,â€ may be a bit misplaced. Phil’s vocals are his own style and, if anything, sounds more like Wes Scantlin from Puddle Of Mudd of which he admits to getting help from in the beginning of his musical career. While being described as a alternative or post-grunge rock outfit, there is definitely cause to bring up the influences of a 90s Seattle scene that can be heard in F.L.O.W’s sound. 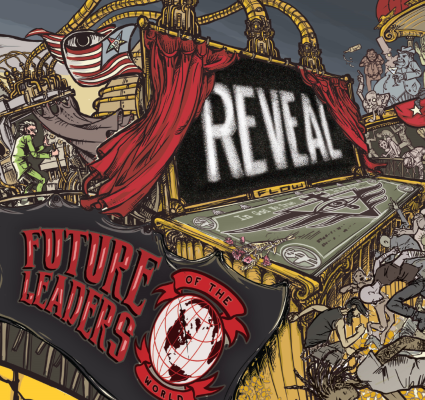 “New Orleans is where the band fell apart; it just felt like God was calling me to come back and pick up the pieces, to start over.” ~ Phil Taylor.

Phil’s vocals go well with Ian’s guitar playing and Jarred’s bass groves. Russell’s drum beats add to the feel of Alice in chains meets Puddle of Mudd with a bit of Soundgarden mixed in for flavor. The lyrics are also something worthy of listening to to get the message in the songs. It is a very well written album all around. If you are or were a fan of the grunge era, this is most certainly what the next evolution of the scene’s sound would have been.

Take a flyer and pick this one up. If you do, I’m very interested in hearing what you think about it.

F.L.O.W. is currently scheduling a tour for late fall 2015 with newly signed Sony Records artist, Voices of eXtreme. When we have more information on dates and venues, National Rock Review will make sure to let you know about them.

Future Leaders Of The World – Let Me Out