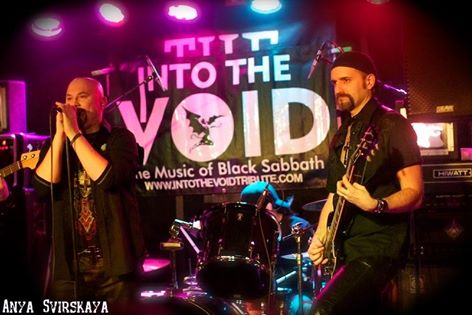 A record number of fans attended the Global Black Sabbath Convention at The Rock Shop in New York City on March 30, 2014, to gather with others who share their love of all things Black Sabbath. Members came as far away as Brazil, Alaska, Florida, and Montana. There were VIPs and local businesses involved in the convention.

The convention consisted of two events; a morning meet-n-greet, and the evening festivities featured a double-bill made up of two very different Black Sabbath acts: Phil Jakes, Into the Void.

Global Black Sabbath ConventionÂ is a group of Sabbath fans that get together sharing their love for the music of Black Sabbath. The cornerstones of GBSCÂ are the Black Sabbath tribute bands from around the world. Â Tribute bands have playedÂ for many years without recognition in local venues. GBSCÂ links up with these bands and brings the fans together so their musicÂ is enjoyed and shared by all.

GBSCÂ is different. It celebrates all eras of Black Sabbath; the Ozzy years, Ronnie James Dio, and the many singers and drummers over the history of this legendaryÂ band. Black Sabbath pages in general have many people arguing. GBSCÂ rarely experiences disagreements and has designed a mission statement that reflects their beliefs. The history of Sabbath fan clubs has not been a good one, but GBSC offers a friendly alternative that brings fans together.

In a world of virtual realities, GBSCÂ has become the Masterâ€™s of Reality as they brought their first convention to one of the most famous cities in the world; New York City. Three out of the four administrators traveled to NYC to the convention for a morning meet and greet. It was held in the hotel conference room at Best Western Prospect Park Hotel. This meet and greet was put on by Hollis Audio Labs and featured Laney vintage hand wired amplifiers.

Later on that evening at The Rock Shop, the convention started to a roar. There were several vendors on hand. La Bella StringsÂ displayedÂ their strings which are used by Tony Iommi. Heavy Leather NYC, whose handmade Rock Star guitar straps areÂ used byÂ Black Sabbath, Lemmy, and Johnny Winter, was there as well. In addition, the luthier of Tony Iommiâ€™s replica Monkey, Lou Moritz,Â was on hand with his guitar, which is usedÂ extensively by Iommi himself.

GBSCÂ brought the best tribute bands in the country, which were both unique in their presentations. The first act was Phil Jakes,Â who plays in a unique finger-style acoustic method. When Phil sat down to play, everyone knew the maestro had come. Phil played a thirteen-song set, which had the audience singing along to Sabbath Bloody Sabbath. JakesÂ did a beautiful rendition of Sabbathâ€™s song, Changes, with Ricky Woods of Into the Void. Phil ended the set with the classic song, Heaven and Hell. Ben Fahl, administrator, said this was a wonderful spell-bound set, and one of the many highlights of the night. JakesÂ recently released his premier CD of these songs, titled A Bit Of Fingerstyle; The music of Black Sabbath for Solo Guitar.

After Jakes, Into the Void took the stage and ran through an amazing set of many Sabbath songs the average fan would never get to hear. Into the Void features Ricky Woods (Vocals), Aaron Kipness (Guitar), Martin Beck (Bass), and Tom Capobianco (Drums).

Into the Voidâ€™s philosophy is to recreate the sound of Sabbath note for note, a task they accomplished quite well. Ben Fahl later said what an honor it was to have such a band play so superbly and he stated he was transported back in time as if Black Sabbath themselves were on the stage. Into the Void played a full 99-minute set pulling out all the stops.

The Rock Shop experienced a record crowd that night and provided an intimate setting that was filledÂ wall to wall with screaming and partying Sabbath fans. The convention ranÂ smoothly, under the management of the administrators, making the fans bondÂ together creating a wonderful atmosphere.

For the future, GBSCÂ plans to have possible conventions in the US and Brazil bringing their operation to other fans across the globe. GBSCÂ is about the fans and the music, which will never end, and can be enjoyed for ages to come.

If you are a Sabbath Fan, join them on Facebook to keep up with future events: GBSC Facebook Page